The Inflation Reduction Act of 2022

On Tuesday, August 16, 2022, President Biden signed into law the Inflation Reduction Act of 2022.

The new legislation is a scaled-down version, albeit renamed, of the Administration’s prior efforts, Build Back Better. It focuses on climate investments, clean energy and deficit reduction. To streamline passage and avoid the 60-vote Senate requirement, the Act procedurally was introduced as a budget reconciliation bill.1 Consequently, there must be revenue raisers to offset expenditures within the proposed budget window, which in this case is 10 years. That said, it begs the question for Glenmede clients and families, how might the Act’s revenue raisers impact you?

For most, there is likely good news in the answer. Unlike the original Build Back Better Act that contained numerous tax changes aimed at families of wealth and income earners over $400,000 per year, there are only four major tax-related revenue-raisers in the Act.2 And, of them, little impact would be felt by most Glenmede clients. Still, it is important that they be understood.

The Act establishes a minimum corporate income tax rate of 15%. This means that applicable C corporations (not S corporations nor a few other exceptions) each year will pay the greater of regular corporate tax and an alternative minimum tax of 15% of adjusted financial statement income. It applies to corporations with financial statement income in excess of $1 billion, as averaged over the prior three years.3 The taxes paid under the alternative minimum tax would be creditable against regular tax in future years to the extent the regular tax in a succeeding year exceeds the alternative minimum tax. Taxing a corporation based on financial or book income is unusual; however, a key modification from the original bill is that the measured income will be net of accelerated tax depreciation and certain other items.

A second component is approximately $80 billion of additional funding to the IRS, particularly for purposes of enforcement and collection. This is aimed at providing resources for the IRS to collect what is legally owed under existing law. The Act summary indicates that by investing this $80 billion over the next 10 years, the IRS will collect $204 billion, for a net gain of $124 billion. Further, the Act provides that none of the appropriated funds are to be used to increase taxes on any taxpayer with taxable income below $400,000.

Specifically, the following would be expended over the 10-year period:

• $15,000,000 for the IRS to prepare and deliver a report to Congress on the cost of developing and running a free direct e-file tax return system, and additional funding to the Treasury Inspector General for Tax Administration ($403 million), the Office of Tax Policy ($104,533,803), U.S. Tax Court ($153 million) and Departmental Offices ($50 million) to enforce the Act

The Act contains a 1% surtax on corporate stock buybacks; it will apply to the repurchase of stock by a publicly traded company. The use of a buyback is a common way to provide funds to increase per share value as well as provide shareholders a tax-advantageous source of cash versus a dividend. For those who do not follow buybacks, they are relatively common and can be valued at billions per year on the S&P 500 alone. For 2021, the total value of buybacks exceeded $911 billion, and earlier this year it was reported that one firm predicts the volume in 2022 to exceed $1 trillion in value.4

Taxpayer-unfriendly, the loss limitation has been subject to much political adjustments. Enacted in the Tax Cuts and Jobs Act of 2017, business owners were prohibited from using losses to offset more than $250,000 of their nonbusiness income (or $500,000 of nonbusiness income in the case of married couples). The stated goal was to prevent high-income taxpayers from deducting business losses (which perhaps may be “on paper” only) to reduce the other taxable income. The limit on pass-through losses was set to expire after 2025. The Coronavirus Aid, Relief, and Economic Security Act, also known as the CARES Act, suspended it for 2020 and retroactively for 2018 and 2019. The American Rescue Plan Act extended it for one year, through 2026. The Inflation Reduction Act extends it for another two years, through 2028.

The bill no longer contains a change to the taxation of carried interest. Because this has become a hot topic, many tax practitioners would not be surprised to see it reappear at some point. As a result, a brief reminder is in order (see sidebar for a definition and an example). To some, carried interest appears to be compensation for services, but under current tax law it instead can receive more favorable tax treatment as long-term capital gains (maximum rate of 20%, with a potential additional surtax of 3.8%) versus the highest federal marginal rate on ordinary income (37%).

Generally, short-term gain is taxed as ordinary income, where short term is defined as held for a year or less. Property held longer than one year benefits from the reduced long-term capital gain rate. In 2017, the short-term gain holding period for purposes of carried interest was extended to three years. Recent efforts (the original proposed Inflation Reduction Act and the original Build Back Better Act) have sought to extend the holding period for long-term capital gain treatment five years. Others have advocated recharacterizing carried interest from a profits interest to a capital interest, which would result in taxation as ordinary income.

On August 11, 2022, Senate Democrats updated the one-page summary chart of the Act: 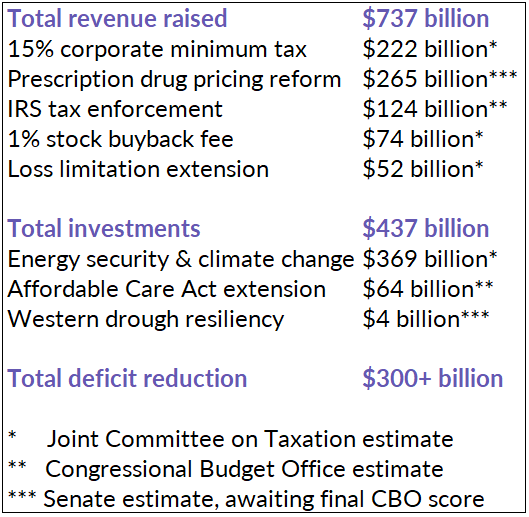 What is carried interest?

Many of the expenditure provisions of the Inflation Reduction Act of 2022 will not be triggered immediately, but the tax changes will be effective starting in 2023. If you have any questions about how this law may impact you, please contact your Relationship Manager.

1 When proposed law is introduced in Congress, it is referred to as a bill. Upon passage by both chambers, it is an Act.

2 The original bill contained two additional revenue raisers. One relating to carried interest was removed; the second, relating to prescription drug pricing reform, remains and is estimated to raise $288 billion over 10 years, but since it is unrelated to taxation it is not discussed in this article.

4 Dailey, N. “Companies Are on Pace to Buy Back a Record $1 Trillion in Stock This Year as Russia’s War in Ukraine and the Fed’s Planned Rate Hikes Rattle Markets.” https://www.businessinsider.in/stock-market/news/companies-are-on-pace-to-buy-back-a-record-1-trillion-in-stock-this-year-as-russias-war-in-ukraine-and-the-feds-planned-rate-hikes-rattle-markets/articleshow/90237278.cms.

This presentation is intended to provide a review of issues or topics of possible interest to Glenmede Trust Company clients and friends and is not intended as investment, tax or legal advice. It contains Glenmede’s opinions, which may change after the date of publication. Information obtained from third-party sources is assumed reliable but is not verified. No outcome, including performance or tax consequences, is guaranteed, due to various risks and uncertainties. Clients are encouraged to discuss anything they see here of interest with their tax advisor, attorney or Glenmede Relationship Manager.