The Bear and Bull Dilemma

“When you come to a fork in the road, take it!” – Yogi Berra

Markets rebounded throughout much of the third quarter, with the S&P 5001 rising 17.4% from its June lows to its August peak (Exhibit 1). This was the fourth and largest rally year to date and appeared underpinned by a growing belief that the worst had passed. However, despite its magnitude and strength, this rally ultimately fizzled, and markets reverted to their previous lows by the end of the quarter. Further, the S&P 500 returned to a loss of over 20%, making the previous rally just another in a long list of bear market rallies.2 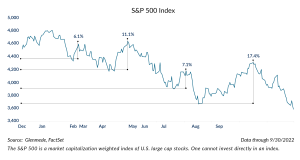 This indecisive back-and-forth movement of the market suggests an investor base that is struggling to ascertain the fundamental path forward. Markets have come to a key fork in the road and likely will, similar to Yogi Berra, eventually take one of those forks quite decisively.

The more bullish path (Exhibit 2) investors had seemingly been believing through mid-August centered on the thesis of “peak inflation,” in which inflation declined meaningfully, allowing the Federal Reserve (Fed) to take its foot off the monetary policy brakes. In this situation, both the economy and corporate profits should have been able to continue to grow, providing justification for the premium market valuations at the time.

The bumpier and more difficult bearish path would similarly see inflation decline, but only slowly and under the weight of further significant and cumulative rate hikes. Such restrictive monetary policy would be a weight not just on inflation but also on the economy and corporate profits. This fundamental environment would ultimately undermine the argument for premium valuations, leading markets to reprice back close to or even below fair value as a recession unfolds. As the third quarter drew to an end, the cumulative weight of the evidence appeared to be more supportive of the bearish argument.

Hopes that the U.S. might experience peak inflation have so far proved overly optimistic. Headline inflation started to show some signs of slowing, as commodity prices caught a reprieve after moving higher in the first half of the year. However, the Core Consumer Price Index (CPI), which excludes the more volatile food and energy components, registered monthly gains of 0.8%, 0.2% and 0.5% during the quarter’s three reporting periods, on average well above the Fed’s preferred range of 0.3% or less (Exhibit 3). Importantly, prices for “sticky” CPI components, that is, items that change price relatively infrequently such as housing and medical care, hit a 40-year high in August.

EXHIBIT 3: Inflation is still not where the Fed wants it Overseas, the war in Ukraine continued to disrupt European supply chains. In particular, much of Europe grappled with the prospects of a full-fledged energy crisis due to a reliance on Russia for oil and natural gas. European natural gas prices spiked as high as 4x relative to the beginning of the year, and explosions on the Nord Stream pipeline further threatened energy-related disruptions. Soaring energy prices were a key contributor to a record 46% annual inflation rate in Germany’s Producer Price Index, which proved worrisome ahead of the region’s winter season.

The Federal Reserve Toughens Up

Markets have come around to recognizing that the Fed intends to overtighten monetary policy to bring inflation under control (Exhibit 4). In this illustration, the blue line, which represents the fed funds rate, has just surpassed the green line, which represents the theoretical neutral level of that fed funds rate, above which monetary policy is restrictive to the economy and below which it is stimulative. Further, the red dashed line shows the path indicated by the fed funds futures market, which is on target to rise well above the green line, implying a path of meaningful overtightening by the Fed through 2023.

EXHIBIT 4: The Fed is now projected to push rates well above neutral through 2023 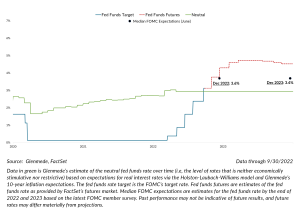 The Summary of Economic Projections, published alongside the September Federal Open Market Committee (FOMC) release, showed the median Fed voter expecting slower economic growth and a larger increase in the unemployment rate for the next two years. Such projections point to a Fed willing to tolerate some economic pain as an incidental effect of rising interest rates meant to combat inflation.

Most indicators that provide a glance ahead for the economy, often referred to as leading indicators, experienced further weakening during the third quarter. Business surveys, which ask leaders in global manufacturing and services companies about current conditions and their expectations for the next 6 to 12 months forward, exhibited such weakness. The Global Manufacturing Purchasing Managers’ Index,3 a survey of businesses regarding the current environment, fell from 50.8 in July to 49.3 in August, its lowest since June 2020. Production losses were recorded in the U.S., Eurozone, U.K. and Japan, with new orders continuing to fall at an increased rate in August and inventory levels rising. Meanwhile, Glenmede’s Leading Economic Indicator, which seeks to provide estimates of expected GDP growth over a forward 6- to 12-month window, dipped further into negative territory through the quarter, driven by weakness in consumer sentiment, industrial conditions, housing and monetary policy (Exhibit 5). 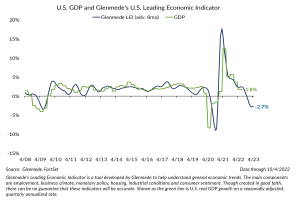 This weakness in the leading indicators comes on top of two straight quarters of negative GDP growth to begin the year, highlighting the pronounced stakes for recession in the near term. The path for an economic soft landing (i.e., one where the Fed successfully brings down inflation without pushing the broader economy into recession) narrowed as the central bank was forced to become incrementally more aggressive with its tightening.

As is often the case when approaching a fork in the road, Wall Street analysts have only recently begun to slowly adjust their estimates for corporate profits. Expectations for earnings in 2023 have declined approximately 4% from a high of near $252 for the S&P 500 earlier in the summer to their current level of near $242 (Exhibit 6).

We suspect such adjustments have further to go, given the impact of the rising dollar, higher interest rates and the fact that recessions, on average, have seen a decline of 15% from prior peak earnings.

EXHIBIT 6: Earnings expectations need to be adjusted given the more challenged economy 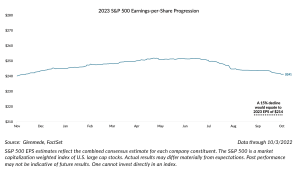 Markets have declined materially in 2022 but still sit above fair value, according to Glenmede’s valuation models, which are based on an aggregate of earnings, cash flow, book value and dividends for the companies in a given index (Exhibit 7). Historically, economic expansions that have continued into the late cycle have seen markets remain above fair value, but economies that decline into recession tend to see valuations drop at least to, if not below, fair value. If the U.S. economy were to proceed to recession, further downside likely remains.

EXHIBIT 7: Equity market valuations have come down but remain above fair value 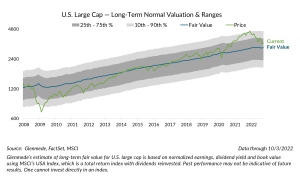 While equities appear to have declined closer to fair value, bond yields have been on the rise, leading them to be more attractive than they have been in quite some time (Exhibit 8). Yields on the safest of bonds — U.S. Treasuries — have risen to near 4% and, in a few instances, even over 4%. Such yields are now above longer-term expectations for inflation, meaning investors no longer have to accept a decline in purchasing power for investments in such bonds. Alternatively, after years of yielding less than the typical dividend yield on a stock, most bonds now yield well above the payouts available from the typical stock. Further, investors willing to bear some credit risk can target even higher yields since the pricing of such bonds embeds a payment to compensate for credit risk. In short, bonds have become more attractive, both on an absolute and relative basis. 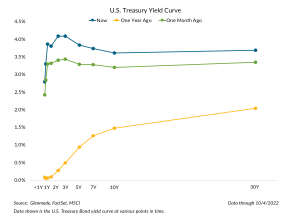 Given the rising risk of recession and still-premium equity valuations, investors should maintain a defensive position in portfolios relative to their goals-based investment policy, achieved primarily through an underweight to equities. Within equities, investors should favor quality companies due to their stability and shy away from international equities, Europe in particular, given even greater economic difficulties abroad. An overweight to fixed income and cash is reasonable given the underweight to equities and the now higher yields and expected returns on bonds. Within fixed income, investors should continue to allocate more heavily to shorter-term investment-grade fixed income with maturities between two and five years. This portion of the yield curve provides just as high yields as further out the curve and is less sensitive to the residual uncertainty around the path and ultimate resting point of the fed funds rate.

Perhaps just as important as these tactical tilts themselves, investors should be careful that such allocation tilts are appropriately sized. Investors should remain committed to their longer-term goals-based investment plan and avoid the pitfalls of attempting to time wholesale exit and re-entry in volatile markets. While markets historically have had relatively volatile swings over one-year and even three-year periods, markets have been quite resilient long term, leaving investors who are willing to wait with less likelihood of disappointment (Exhibit 9). Further, an effective goals-based investment approach should already assume twists and turns in the market and target an asset allocation that should enable investors to ride out volatility. The tactical tilts employed around such an asset allocation should not take a portfolio too far astray.

EXHIBIT 9: Long-term investors have time on their side in managing risk 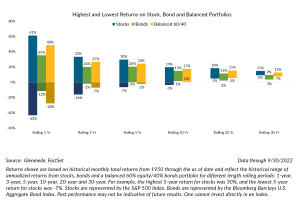 The market’s downward trajectory is unlikely to be straight, and the series of bear market rallies may not yet be over. Glenmede’s Market Sentiment Index has recently indicated that markets may have sold off too far on a near-term basis again (Exhibit 10). Such readings tend to be followed by near-term market rallies like the other four experienced so far this year. Investors who have already positioned themselves defensively should remain so since the fundamental prospects have yet to improve, but investors who have yet to properly establish their defensive positioning may be best served by waiting for the pessimism to fade. 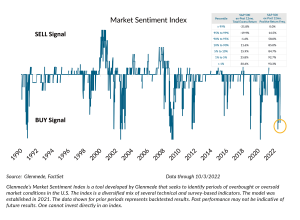 Lastly, while it may be reasonable to tilt a portfolio in a defensive direction on a near-term basis, from a longer-term perspective, investment opportunities have been becoming incrementally better. Long-term expected returns on most asset classes have risen from year-ago levels as markets have corrected this year (Exhibit 11). A further reversion to fair value for equities would complete this picture, making future expected returns even larger and justifying a return to more constructive portfolio positioning. Such conditions as well as the trajectory of inflation and interest rates should continue to be monitored closely.

EXHIBIT 11: Long-term returns on most assets have risen materially 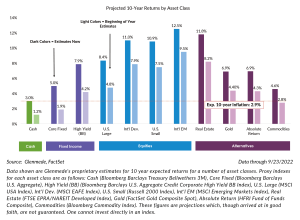 Whichever fork in the road is ultimately taken by the economy and markets, investors should remain both committed to their longer-term plan and appropriately nimble and able to make tactical adjustments as appropriate as the situation evolves.

1 The S&P 500 is a market capitalization weighted index of U.S. large cap stocks. One cannot invest directly in an index.

An Inflation-Induced Bear
The Ukraine-Induced Correction, Inflation and the Fed