Newton’s second law of motion: When the net force acting on an object is not zero, the object will accelerate in the direction of the exerted force.

“Notice that the stiffest tree is most easily cracked, while the bamboo or willow survives by bending with the wind.” — Bruce Lee

The first half of 2022 has been an abnormally rough period for investors. Equity markets, as measured by the S&P 500 index, declined over 20%, entering the first bear market since the onset of the COVID-19 pandemic (Exhibit 1). Large cap growth stocks declined twice as much as large cap value stocks.1 However, no broad equity asset classes were spared in the decline; small cap stocks were down 20.9%,2 while international developed and emerging market stocks were down 19.7% and 17.6%,3 respectively.

EXHIBIT 1: Simultaneous declines in stocks and bonds are rare 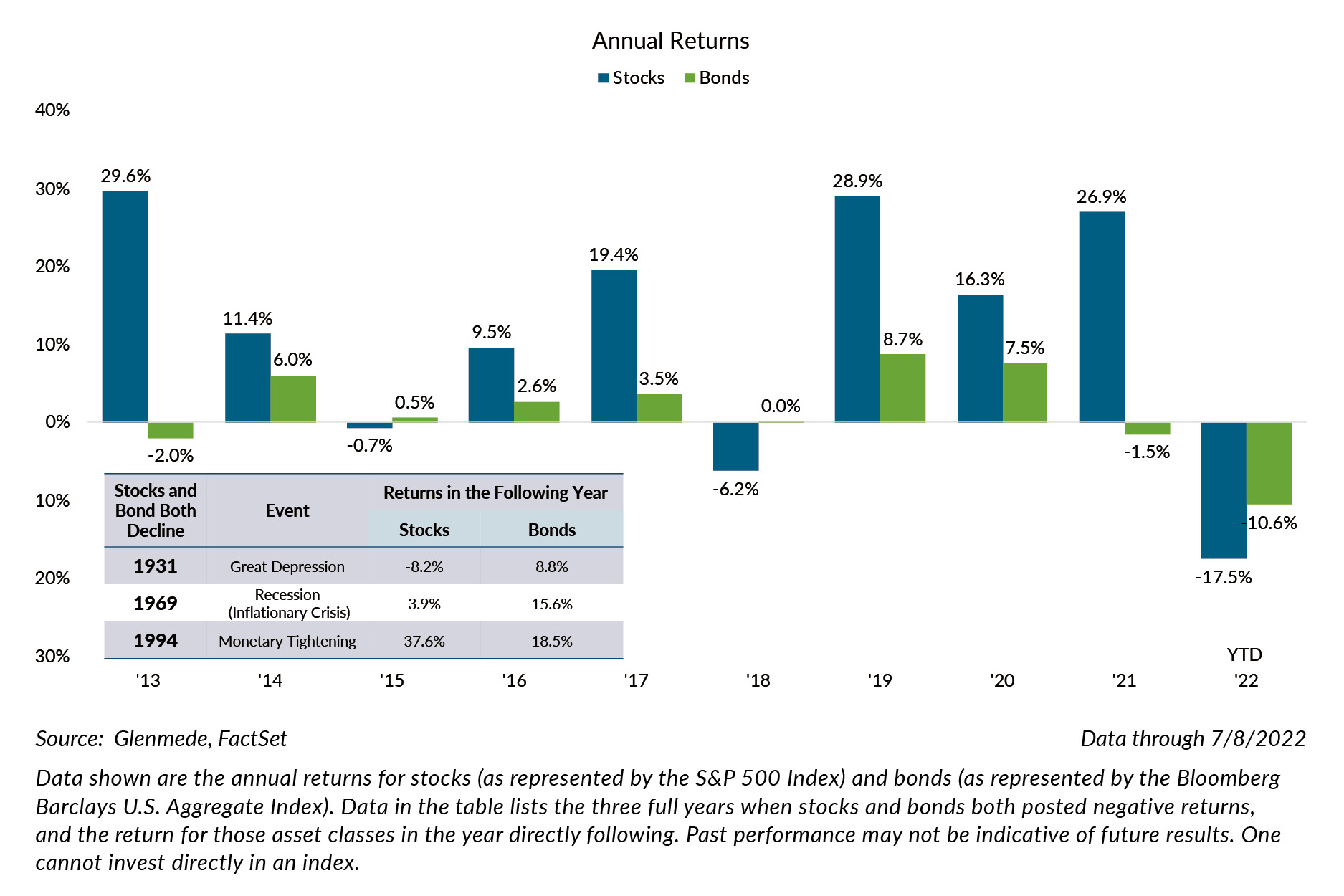 Investors prescient enough to predict the first half’s equity market decline and take the typical approach of shifting to a more defensive positioning with less equities and more fixed income found themselves disappointed as well. Fixed income failed to provide its normal protection. Taxable bonds were down 10.3%1 as interest rates in the U.S. rose significantly. Over the course of the first half of 2022, the yield on 10-year Treasury bonds rose from 2.36% to 2.98%.

This market performance is driven mostly by one of the largest surges in interest rates in history as the Fed became more aggressive in its attempts to address a growing inflation problem. Inflation, which had run higher than the Fed wanted at near 7% toward the end of 2021, continued and even worsened as 2022 progressed. Russia’s invasion of Ukraine disrupted the global supply of key commodities such as oil, natural gas and wheat, contributing to the inflationary pressures caused by COVID-related supply chain disruptions and previous excess stimulus. The national average for fuel prices in the U.S. hit an all-time high in the second quarter, with crude prices surging roughly 47% year to date, driven in part by Europe’s embargo of Russian oil.

EXHIBIT 2: Behind the market action is a Fed aggressively hiking rates to contain inflation 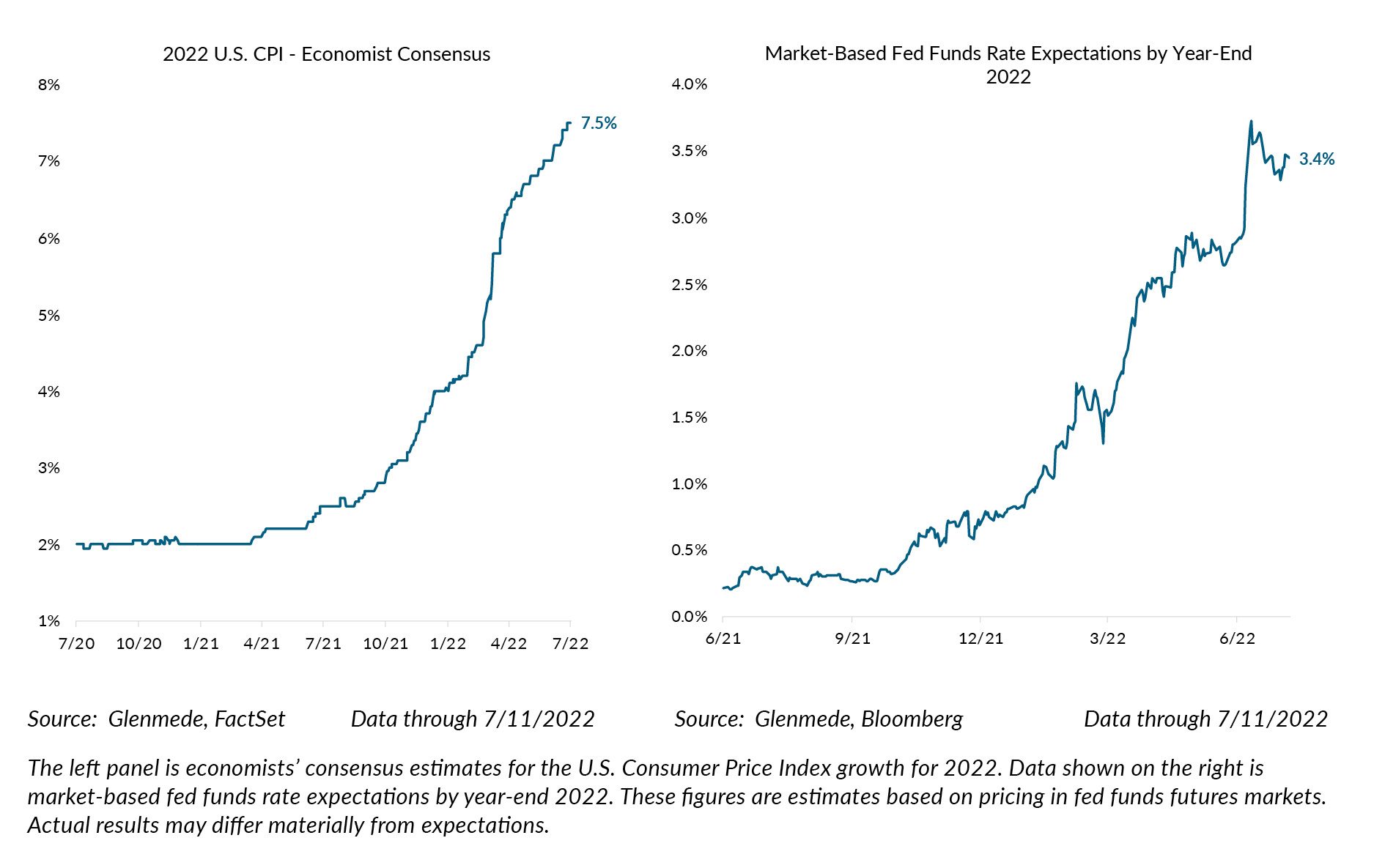 With inflation rising to over 8% and showing few signs of peaking, the Fed has found itself in catch-up mode, needing to rapidly hike short-term rates and guide the market to an expectation of further rate hikes through the end of the year to keep high inflation from becoming ingrained on consumer and businesses expectations. As of now, the market expects the Fed to continue hiking rates to over 3% by the end of the year and anticipates at least a few more rate hikes in 2023 (Exhibit 2).

These inflation pressures and rate hikes have accelerated the economy’s transition to the late stage of its expansion, completing a picture of an economic expansion that had entered the late stage of its cycle. Glenmede’s LEI, which seeks to provide estimates of expected GDP growth over a forward 6-12-month window, picked up on signs of economic turbulence with its first negative reading since early 2020 (Exhibit 3). This was driven by an all-time low in consumer sentiment, softening company surveys and tightening monetary policy beginning to flow through to the broader economy. 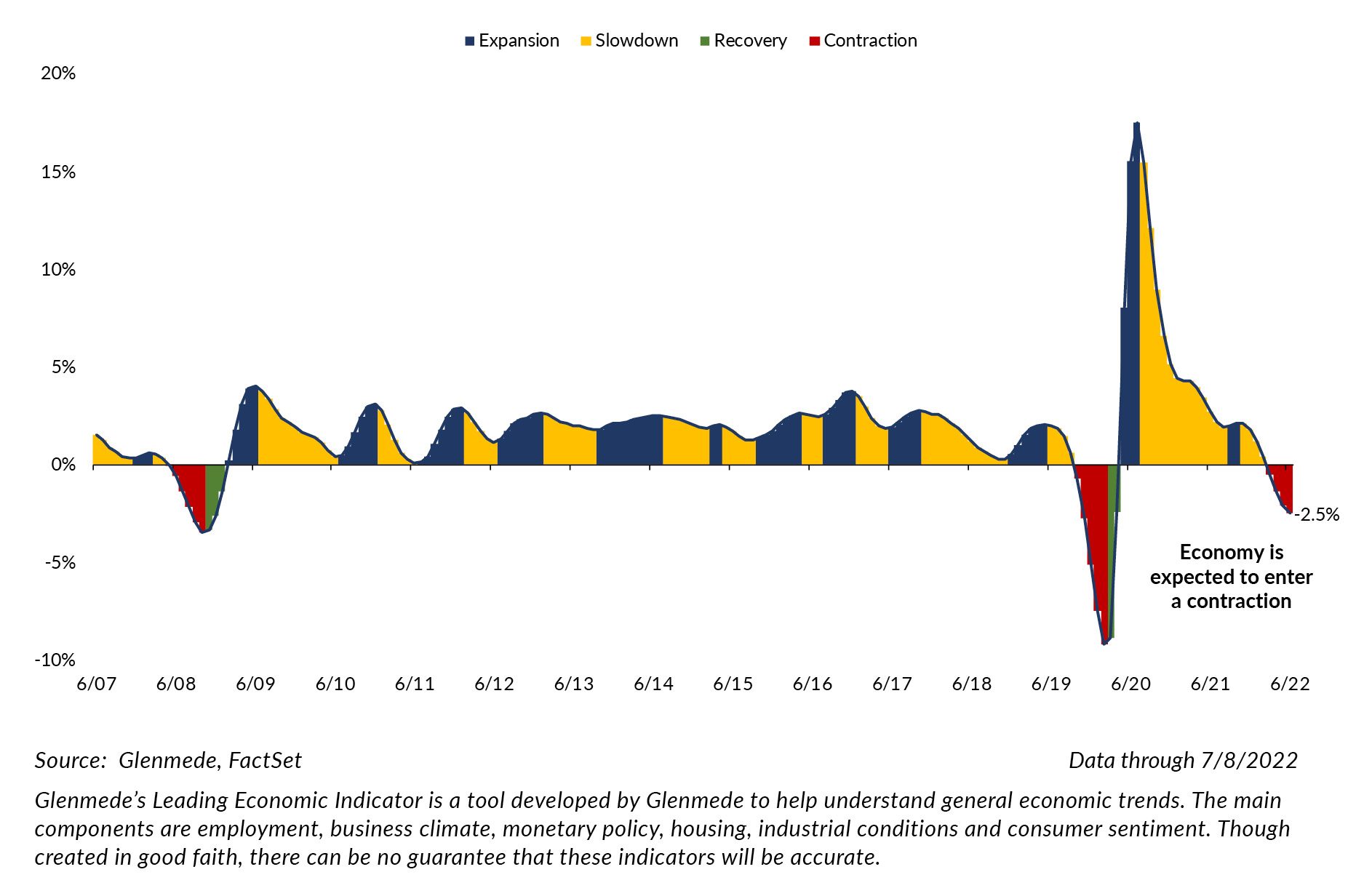 Such a reading by our LEI suggests a recession is now the more likely outcome, although still not a guarantee. The key question remains whether the Fed will be able to engineer a soft landing by reining in inflation without pushing the broader economy into recession. Perhaps aligning with our LEI’s pessimism, it appears markets currently expect the Fed to overtighten to bring inflation under control (Exhibit 4). In this illustration, the blue line represents the fed funds rate, adjusted for bond buying activity — a measure of monetary policy. The green line reflects the theoretical neutral level of that adjusted fed funds rate, above which monetary policy is restrictive to the economy and below which it is stimulative. The red dashed line shows the path indicated by the fed funds futures markets, which is currently on target to rise above the green line, implying the Fed will overtighten to the point of restraining the economy.

EXHIBIT 4: The Fed is projected to hike rates beyond neutral by late 2022/early 2023 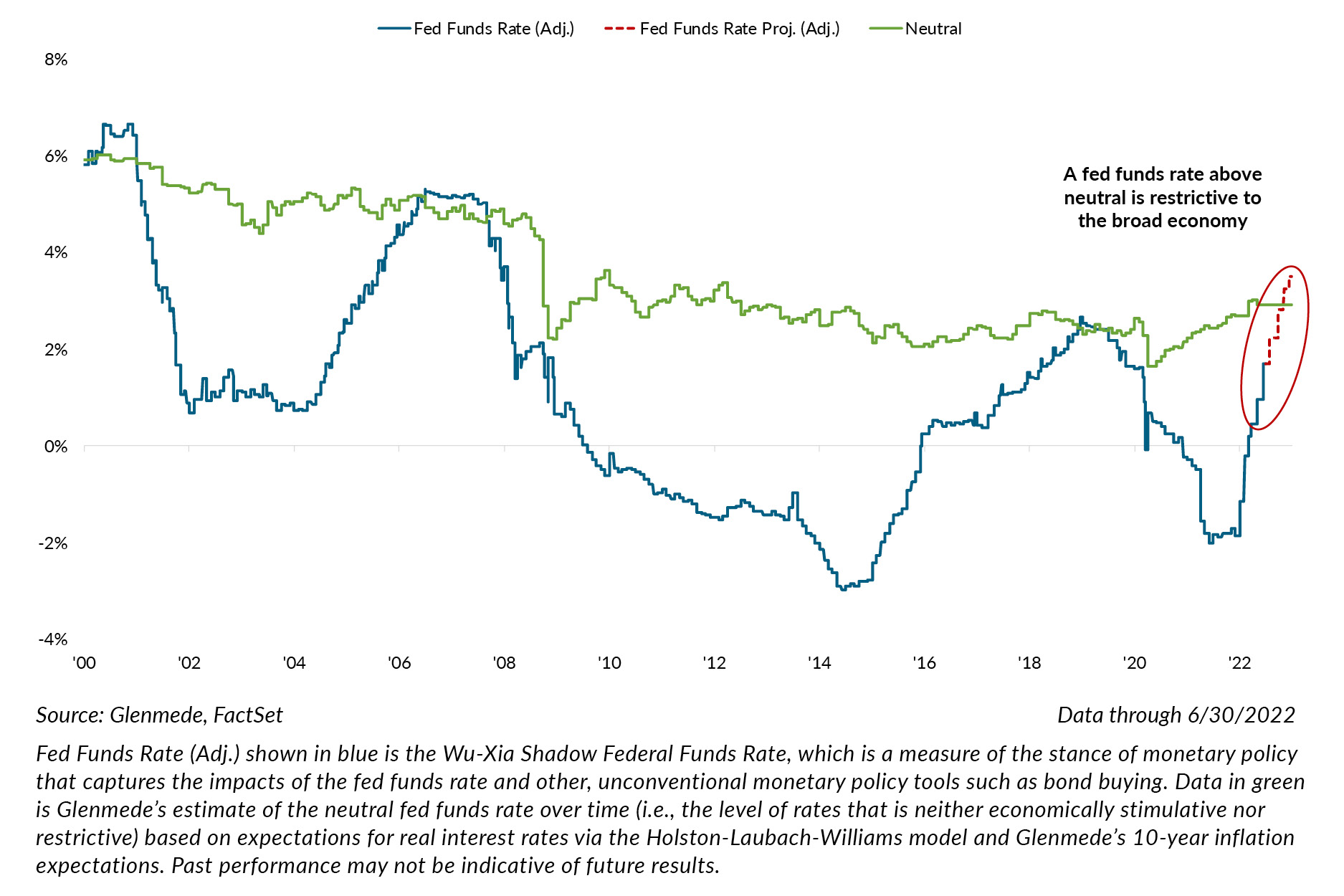 Exhibits 3 and 4 provide a basis for understanding the uncertainty of the current situation. If the Fed were to continue on its current path, which may be the correct decision given the need to bring inflation back down, it is likely to trigger the recession that our LEI is foreshadowing. However, the path of inflation itself is not fully guaranteed, and a weakening in the prices of commodities and other global prices could remove enough inflationary pressures that the Fed could slow its intended path and have less of a hindering effect on the economy.

How the markets respond will depend heavily upon which of these scenarios plays out. The market currently sits above fair value, according to our valuation models, which are based upon an aggregate of earnings, cash flow, book value and dividends for the companies in each index. Historically, economic expansions that have continued into the late cycle have seen markets remain above fair value, but economies that decline into recession tend to see valuations drop at least to, if not below, fair value (Exhibit 5). If the economy were to proceed to recession, further downside likely remains.

EXHIBIT 5: Equity market valuations have come down but remain above fair value 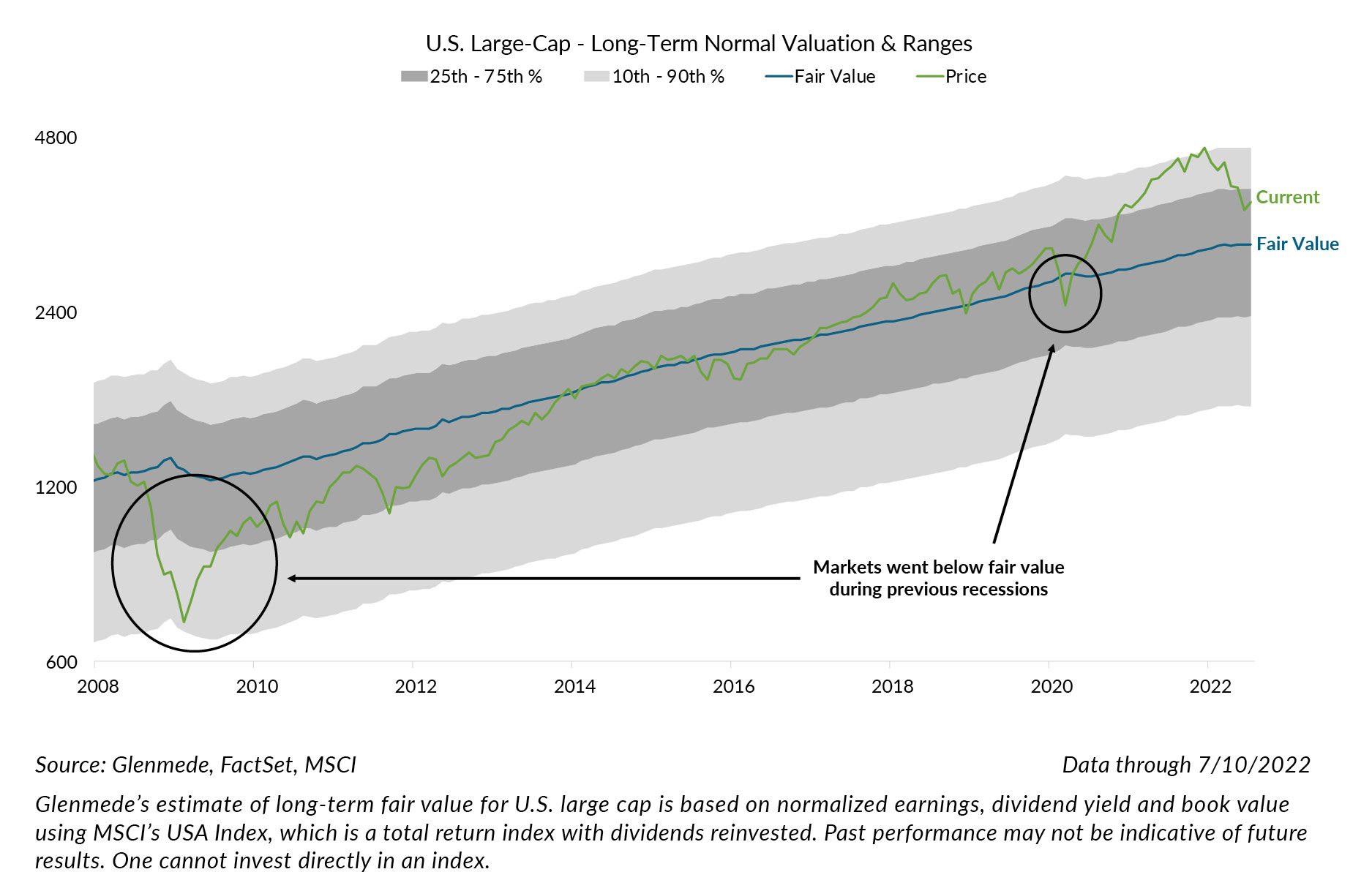 Further, the contraction in price so far has been driven primarily by a contraction in valuation multiples, with earnings estimates ending the quarter near all-time highs in most equity markets. Earnings estimates have remained defiantly strong in the face of economic fears as analysts have been slow to build in assumptions of a downturn, although this is not unusual and often happens around economic turning points. At a minimum, we expect there may be downside to these earnings estimates even in the case of a Fed-induced downturn that does not turn into a full-blown recession (Exhibit 6).

EXHIBIT 6: Earnings estimates do not currently include any likelihood of a recession 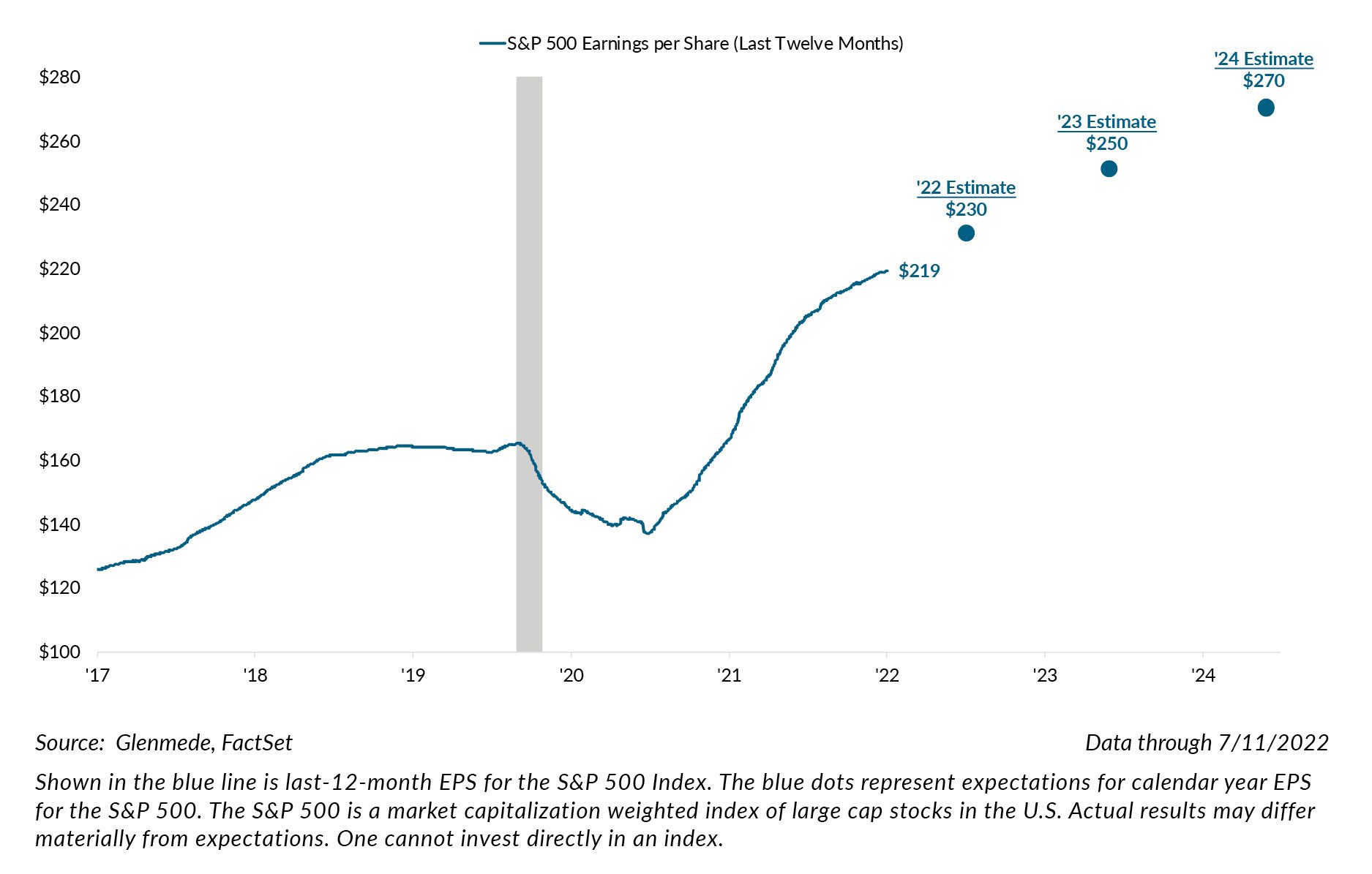 Investment Strategy: Bending with the Wind

EXHIBIT 7: Our framework indicates an underweight to economic risk is warranted 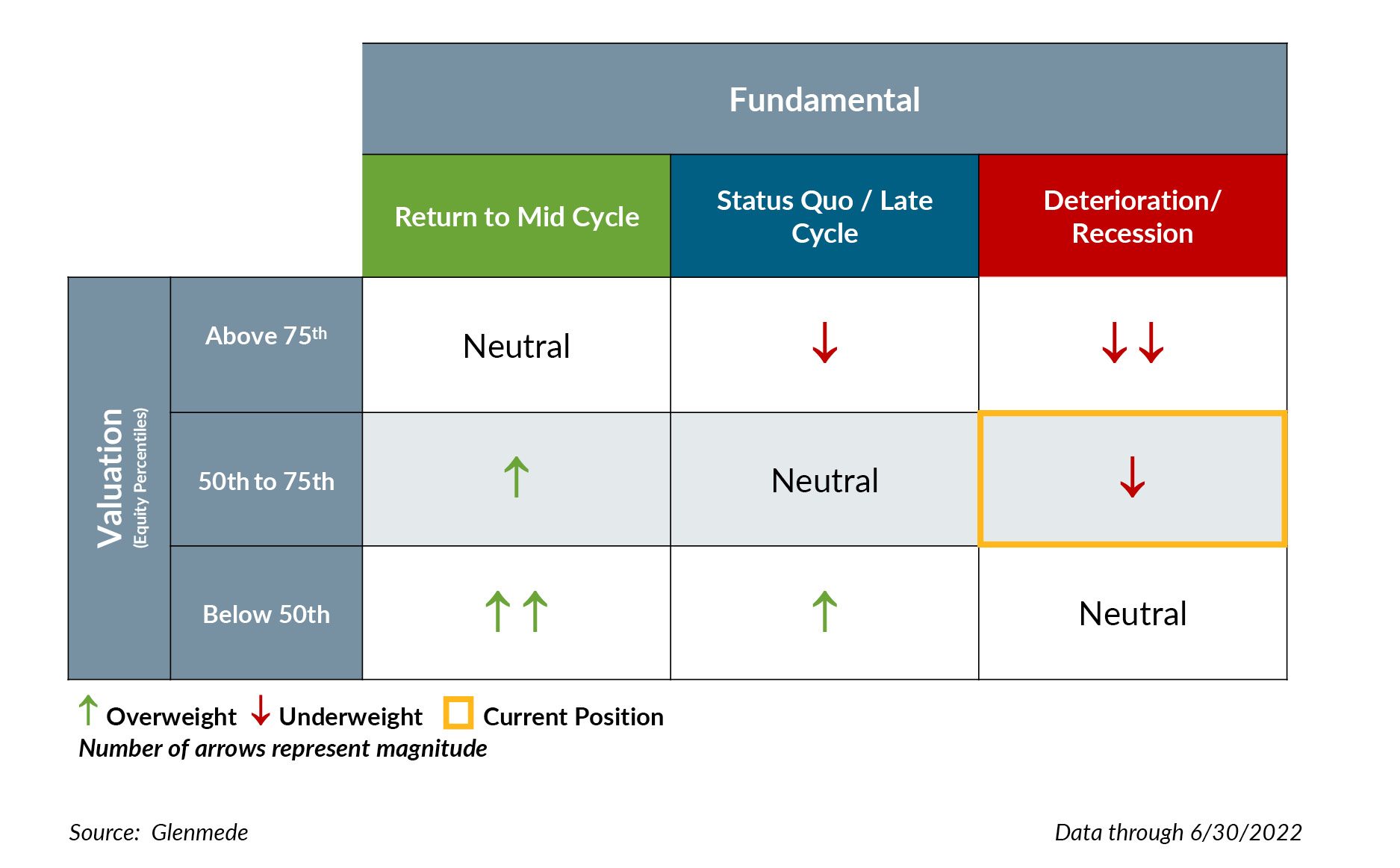 The current situation in Exhibit 7 is highlighted by the yellow box — valuations still sit above the 50th percentile but are not at extreme levels, and the risk of recession is on the rise, justifying a modest underweight to market (equity) risk. If markets rise without a change in circumstances, a larger reduction in risk may be warranted. If markets fall or circumstances improve, a shift back to neutral may be justified.

The direct result of the underweight to equities is an overweight to both fixed income and cash. Within fixed income, investors should allocate more heavily to short-term investment-grade fixed income investments with maturities between two and five years. This portion of the yield curve provides just as high yields as further out on the curve. Perhaps more importantly, shorter-term fixed income and cash are less sensitive to the residual uncertainty that centers around the path and ultimate resting point of the fed funds rate. Within equities, an underweight to international equities, both developed and emerging, is justified given those economies face more serious near-term economic difficulties than the U.S. Within U.S. equities, large cap valuations remain at a premium, while small cap appears to again offer a discount to fair value. The most attractive riskier asset remains real estate, which having declined alongside other assets, again sits at a discount to fair value despite having the advantage of being a beneficiary of inflationary trends and having cash flows that are less sensitive to economic fluctuations.

EXHIBIT 8: What to do and what to watch 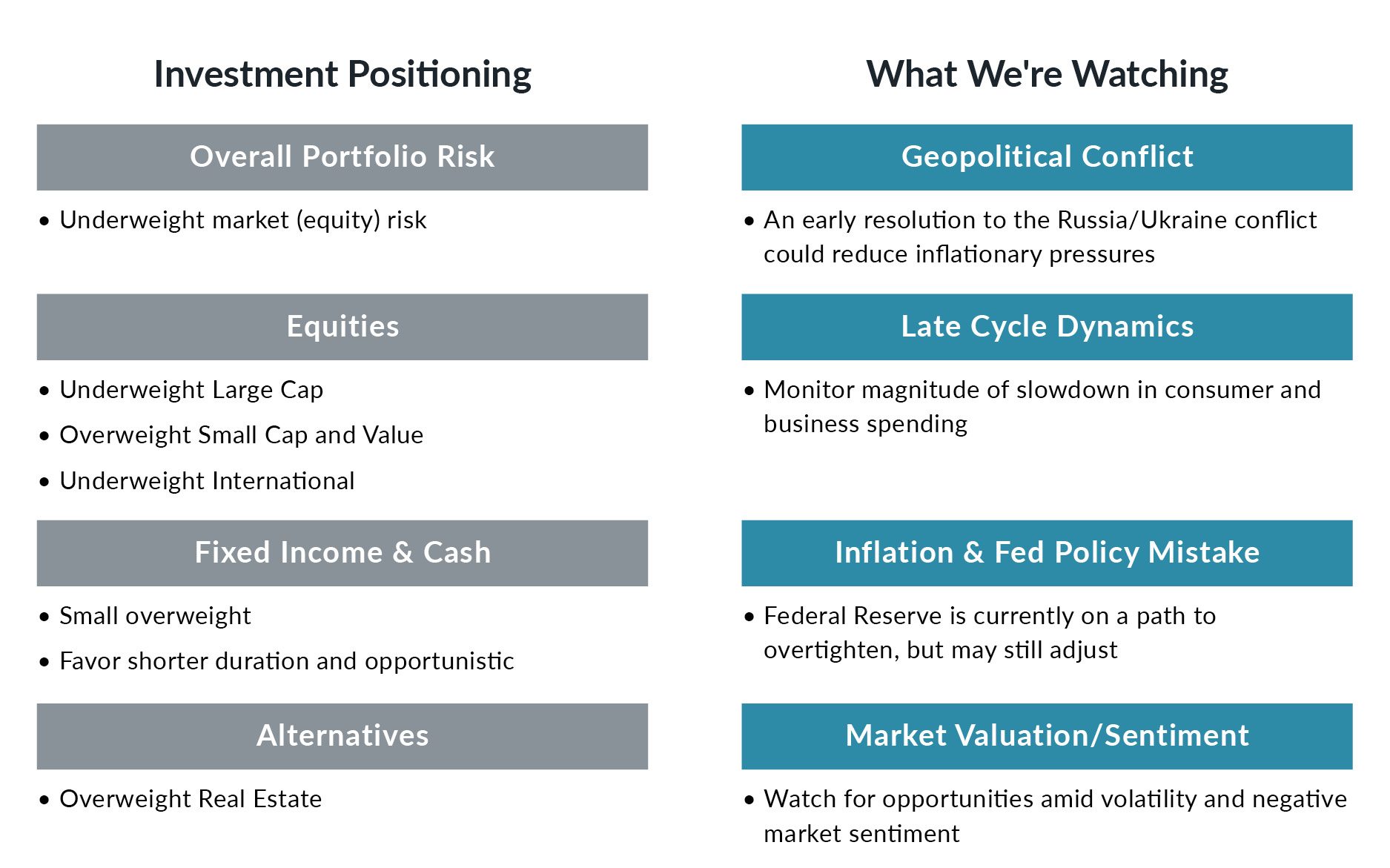 Going forward, it is important to keep an eye on inflation and the expected path of the Fed (Exhibit 8). If inflation were to slow materially, as highlighted earlier, this may provide an excuse for the Fed to slow its rate hike plans. Such a shift in both inflation and the behavior of the Fed would be favorable to market valuations, but more important to the likelihood of a future recession. There remains a chance, although not the base case, that the Fed will have such an opportunity and be able to execute its soft-landing plans. One possible trigger for such a material inflation slowdown would be a combination of a slowing economy and an earlier-than-expected resolution or de-escalation of the situation in Ukraine, justifying a similar frequent monitoring of eastern European geopolitics.

EXHIBIT 9: The penalty for being completely out of the market 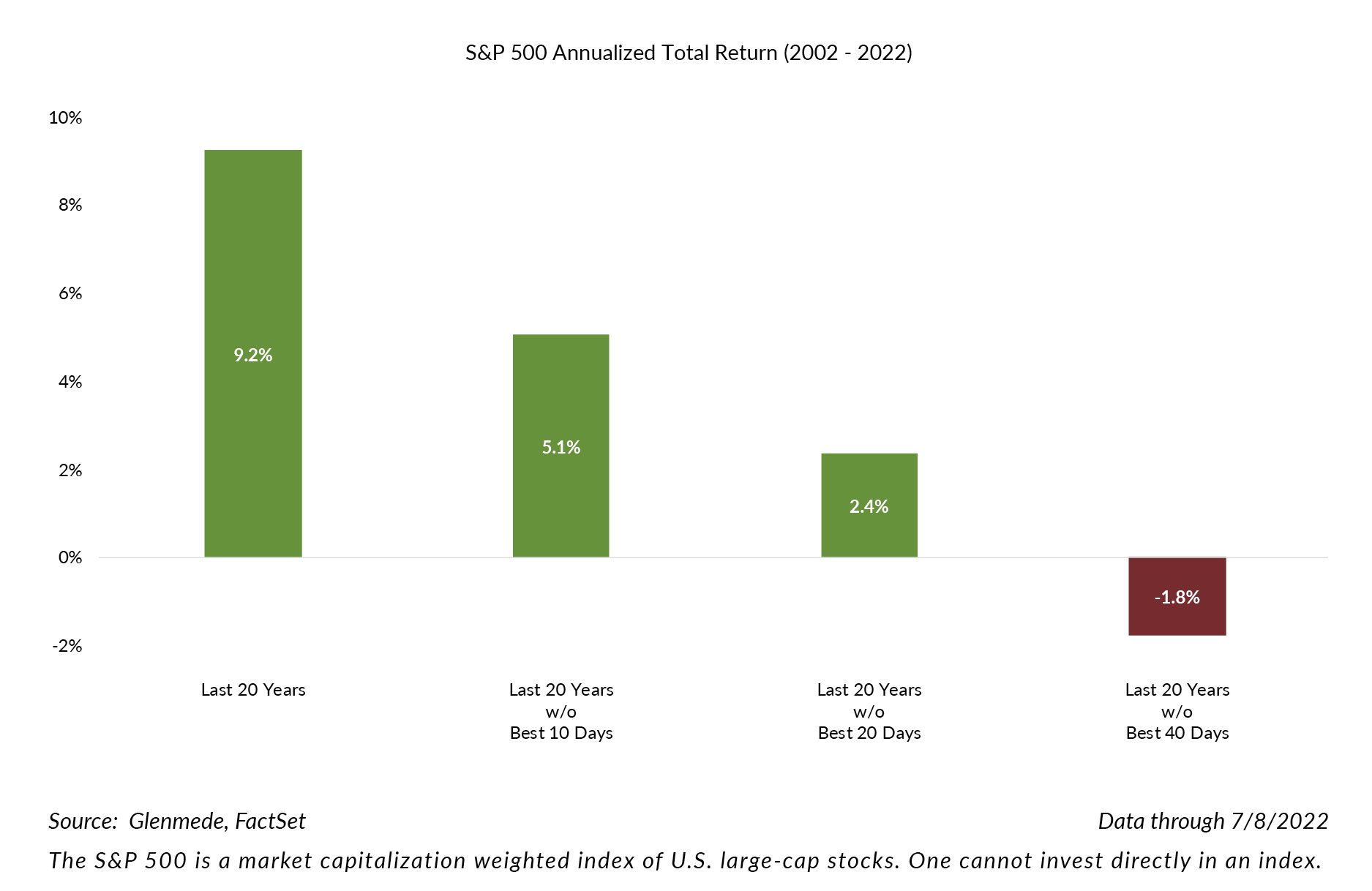 Lastly, having laid out a thought process for an adjustment to allocations, one may notice that such positioning recommendations are not taken to the n-th degree. A batter does not swing at all pitches or to the same degree. A farmer does not plant just one crop at only one time during the year. Overly aggressive actions expose oneself to unnecessary risk. Similarly, investors should hesitate to completely sell out of equities in portfolios. Although the odds may favor a particular outcome, the uncertainty and large embedded cost make the penalty for being wrong too large and more like a gambler’s risk than an investment process (Exhibit 9). Instead, the asset allocation decisions should be calibrated carefully to the situation and likelihood of a variety of potential outcomes, as well as each individual’s unique circumstances. Such a process, humble to a degree and recognizing that such decisions are not made without risk or uncertainty, has served us well in guiding allocations through such uncertain times.