Some Pros and Cons of SPACs for Investors

Interest in special purpose acquisition companies (SPACs) has skyrocketed in recent years. As of May 7, 315 SPACs have been launched so far this year, surpassing the 248 in 2020. Although SPACs have become a larger portion of private-to-public corporate transitions, a majority continue to go the route of traditional initial public offerings (IPOs).

The Securities and Exchange Commission (SEC) defines a SPAC as “a company with no operations that offers securities for cash and places substantially all the offering proceeds into a trust or escrow account for future use in the acquisition of one or more private operating companies.”1 SPACs raise capital to take companies public, similar to an IPO.

SPACs initially serve no commercial purposes; in fact, the only asset on their balance sheet is the cash they raise at launch. With that capital in tow, managers of the SPAC search for a private company that desires to go public. If all parties manage to come to an agreement, the two companies merge and the funds held in the SPAC are exchanged for equity in the post-merger company. As a result, the private company now trades on a public exchange.

Following are a few pros and cons of SPACs and how they compare to traditional IPOs. 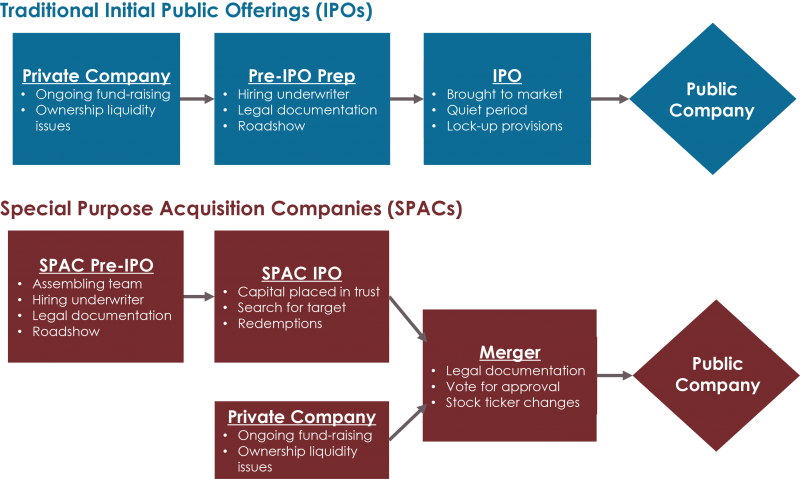 The visual shown is meant to be a general visualization of the process of taking private companies public, via traditional IPOs and SPACs and is not meant to be an exhaustive description of either process. Information contained in this visual should not be construed as a recommendation to buy, sell or hold any specific security or type of security.

More recently, sustainability-oriented companies have chosen to go public by being acquired by a SPAC to bypass the traditional IPO process and take advantage of increasing investor enthusiasm to harness their ability to combat climate change. For more information on this topic, please see our March 23, 2021, article “Can SPACs Drive New Climate Change Solutions?”

A recent study3 found that shareholder dilution, as measured by the amount of pre-acquisition cash remaining in the SPAC per share, has often been a key determinant to realized returns for shareholders in the six months following the acquisition. Results varied widely, from -85% to +163%, a track record of mixed and widely disparate results. As a result, the longer-term performance of SPACs appears highly speculative, and their surge in popularity may be another sign of recent market ebullience. Investors should tread carefully in this space, as a consummated merger is not guaranteed and dilution costs to SPAC shareholders can be significant.

This is an excerpt from a paper written by Jordan Irving, Portfolio Manager, Small/Mid Cap Equity at Glenmede Investment Management, LP, an affiliate of The Glenmede Trust Company, N.A.. This paper is based on information gathered in good faith, but accuracy is not guaranteed. It reflects the opinions of the author, which are current only as of this date. This presentation is intended to be an unconstrained review of matters of possible interest to Glenmede Trust Company clients and friends and is not intended as personalized investment advice. Advice is provided in light of a client’s applicable circumstances and may differ substantially from this presentation. Opinions or projections herein are based on information available at the time of publication and may change thereafter. Information obtained from third-party sources is assumed to be reliable, but accuracy is not guaranteed. Outcomes (including performance) may differ materially from expectations and projections noted herein due to various risks and uncertainties. Any reference to risk management or risk control does not imply that risk can be eliminated. All investments have risk. Clients are encouraged to discuss the applicability of any matter discussed herein with their Glenmede representative.