“Any intelligent fool can make things bigger and more complex...It takes a touch of genius - and a lot of courage to move in the opposite direction.”– Albert Einstein

A touch of genius may be a stretch, particularly in the shadow of a quote from Einstein, but these writings are meant to simplify the complex world of investing for our clients. We typically focus on the most important factors driving economies and financial markets or both. At the start of the year, we noted that investors would likely spend 2021 focused on the transition to the new administration, the vaccine-induced recovery from the recession created by the COVID-19 pandemic and the “next normal” environment to which the economy would emerge.

These themes are still timely, but the investment conversation has been refined to focus on vaccines, inflation and public policy. Accelerating vaccine distribution and the transition to more normal economic behavior underpin much of the market’s moves since the middle of last year. This economic improvement and the fiscal and monetary stimulus that have helped the market along have led to a rise in inflation and in inflation expectations that is now creating its own discussion and concerns about magnitude. Lastly, public policy has been substantial in filling the hole in the economy left by the pandemic, but at a very high cost. While the much-needed stimulus substantially supported the economy, the next policy discussions will center on tax increases meant to bring the government budget back toward balance. 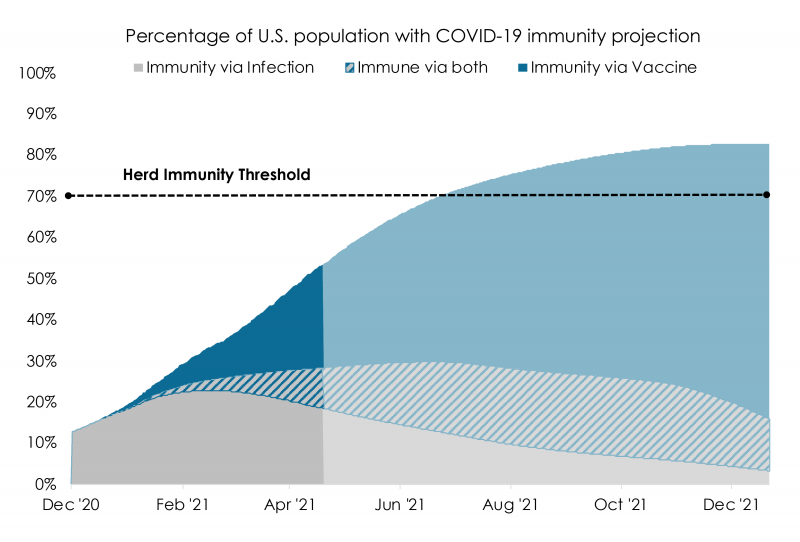 Sources: Glenmede, Bloomberg, Centers for Disease Control and Prevention (CDC), Johns Hopkins University            Data through 4/25/2021
Data shown are Glenmede's estimates for the percentage of U.S. population with COVID-19 immunity, either via infection (gray) or vaccination (blue) or both (diagonal lines). Dark shaded colors represent reported data and light-shaded colors represent Glenmede's projections. Projections assume that immunity obtained via infection lasts for one year, first doses have a 70% efficacy rate, second doses have a 95% efficacy rate, and those not willing to take the vaccine starts at 25% of the population but falls to 10% over time. Actual results may differ materially from projections.

Of course, herd immunity and its threshold are rather nebulous data points given the lack of statistics on the percentage of immune individuals transmitting the disease and the evolution of different variants. However, the concept and its directional impact on the pandemic are not so squishy. At higher levels of population immunity, the virus and its variants will be less likely to cause as many serious illnesses and deaths, and the transmission of the disease from one person to another will slow. We may already be seeing this dynamic at work in the reported case count numbers, which have declined materially from their winter highs. 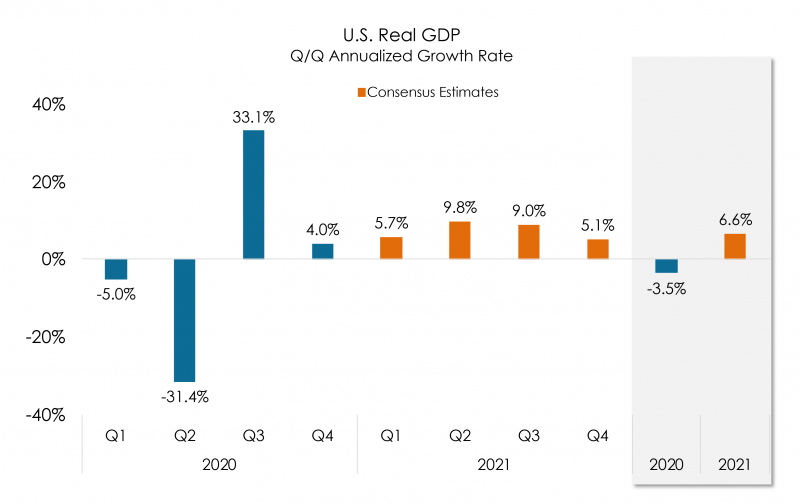 This accelerated distribution of the vaccines and the decline in COVID-19 cases have aided a broader and sustained reopening of an economy now bordering on recovery. In sharp contrast to last year’s 3.5% decline in GDP, the economic consensus is now for a rise of over 6.5% in 2021, partly a reflection of the ongoing reopening as well as the boost to the economy provide by significant fiscal stimulus (Exhibit 2).

Are inflation fears warranted or overstated? 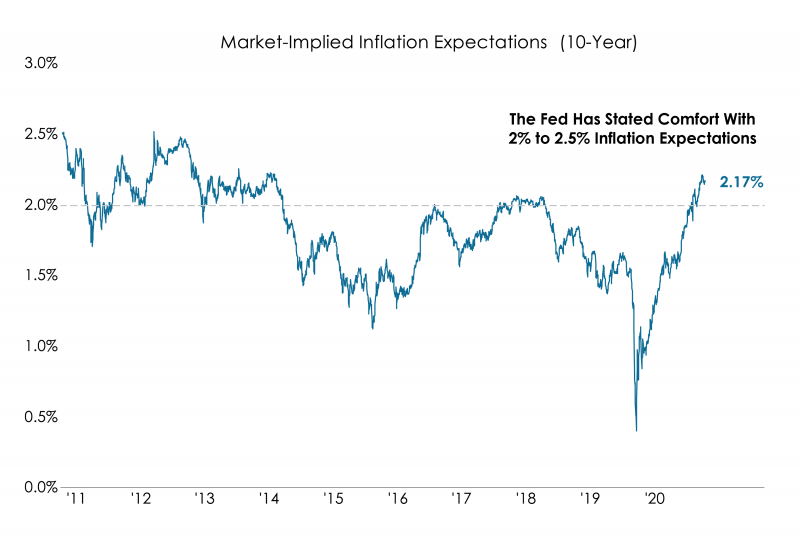 However, investors and prognosticators may need to hold back their urge to extrapolate these trends so far into the future. A good portion of the rise in inflation and inflation expectations is due to the embedded year-over-year comparables from the typically more volatile energy component. Thus, some of the higher reported inflation may be more transitory in nature due to the base effect from declining prices in March/April of last year. 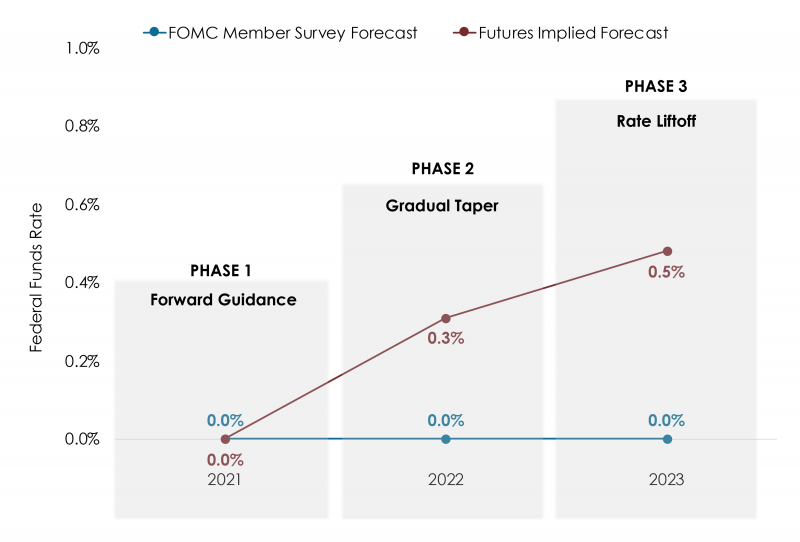 Source: Glenmede, Bloomberg     Data through 4/1/2021
“Member Survey Forecast” represents the median voters’ projections for the federal funds rate for year-end 2021, 2022 and 2023 via the Federal Open Market Committee’s Summary of Economic Projections, as reported in March 2021. “Futures Implied Forecast” represents the level of the federal funds rate priced in via Federal Funds Futures contracts for year-end 2021, 2022 and 2023. Actual results may differ materially from projections.

Federal Reserve Chairman Jerome Powell has made it clear that the Fed intends to tolerate above-average inflation (over 2%) for a period of time before considering raising interest rates. While market expectations seem to point to an initial but slow rate liftoff by early 2022, our expectation remains that the federal funds rate is likely to remain anchored at 0% through 2022, and that most of 2022 will be allocated toward gradually tapering Fed bond purchases as a more measured removal of the significant monetary stimulus provided during the pandemic (Exhibit 4).

The U.S. legislative agenda, with a series of large spending bills passed and some still on the table, remains a focal point in 2021. President Biden recently unveiled the American Jobs Plan, focused on $2 trillion of infrastructure spending. Key components of the plan meet traditional definitions of infrastructure, such as roads, bridges, ports, airports and transit systems, but the plan goes a few steps further by including provisions for broadband internet access, green energy generation and affordable housing, among others. However, unlike the past few rounds of fiscal stimulus, the upcoming bills will likely spread the spending out over multiple years and include funding sources such as tax increases that will, in part, offset the stimulative effects of the spending. As a result, the plan’s stimulative effects would likely be felt mostly beyond 2021 to the tune of ~1.2% of U.S. GDP for the next eight years, but may be almost entirely offset by the impact of the corporate tax hike components of the bill.

The latest proposal calls for raising the corporate tax rate to 28%, along with an assortment of adjustments such as increasing the global intangible low-taxed income (GILTI) rate and instituting a minimum 15% tax on the book income for companies with over $2 billion in annual revenue. The proposed tax hikes would take a ~9% bite out of expected 2022 earnings for the S&P 500 (Exhibit 5). It is important to note, however, that due to the ongoing recovery from the pandemic and the impact of fiscal spending lifting the economy and top-line revenues for companies, earnings are still expected to grow in 2022 through this headwind. 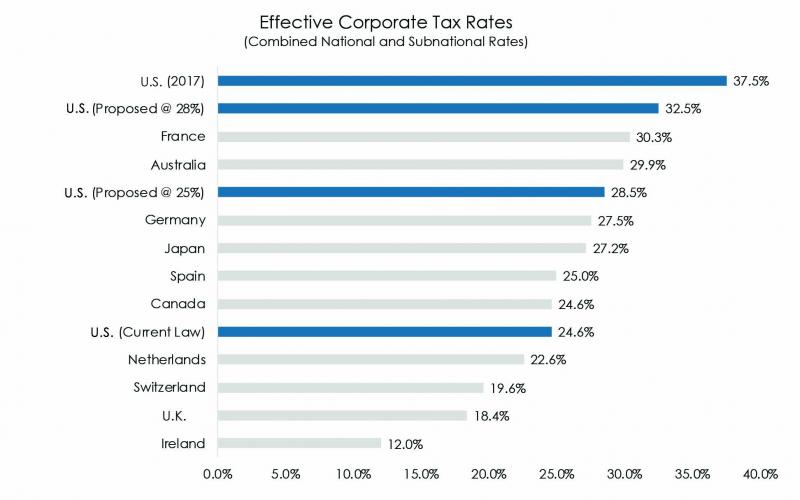 These proposed tax changes may be well-intentioned to fund spending agendas and bring corporate taxes back to perceived fair rates. However, an unintended consequence could be a decline in the competitiveness of U.S. companies. Depending on the magnitude of the corporate tax rate increases, the effective corporate tax rate in the U.S., taking into account the various tax components, could end up being close to the highest if not the highest effective tax rate relative to its global peers (Exhibit 6).

The rise in financial markets has reduced our expected forward returns for most asset classes, but the incremental additional return attained by holding higher-risk investments remains relatively reasonable (Exhibit 7). However, this is a generalization given the disparity in valuations and expected returns. U.S. Large-Cap remains dearly priced by investors, leading to lower long-term expected returns by our estimation. U.S. Small-Cap appears more reasonably priced, but far less reasonably priced than when we made our overweight recommendation last year. International stocks, both developed and emerging, appear more attractive relative to their domestic alternatives, and Real Estate appears positioned to offer the best value on both a nominal and risk-adjusted basis. Meanwhile, our expected returns on fixed income have risen materially with the increase in rates but remain lower than would trigger us to recommend an increased allocation. As such, we continue to recommend a neutral allocation to risk within portfolios, an underweight to U.S. Large-Cap equity and overweights to U.S. Small-Cap and Real Estate. 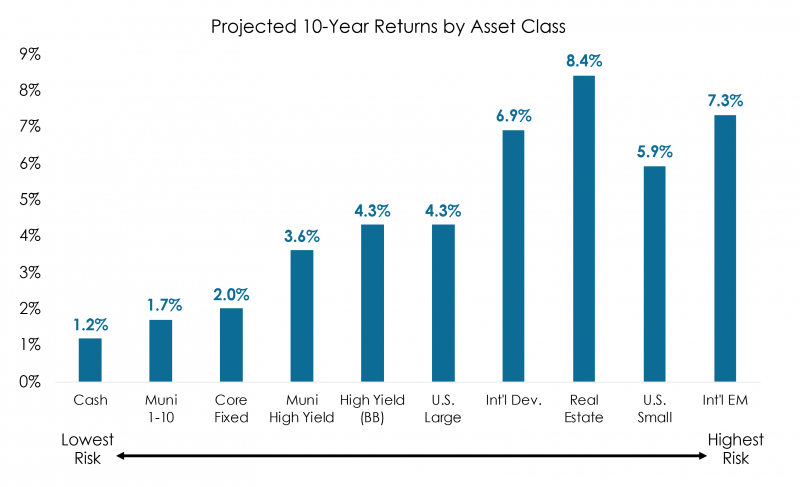 What could cause us to reassess

We created this focused list of economic and market drivers not just to underpin our expectations but also to inform our awareness of associated risks. The table below outlines the summary of our observations and expectations on the left and the potential developments we are watching on the right. The ongoing vaccine rollout appears on track and the proliferation of virus variants seems manageable, but both deserve ongoing monitoring. Inflation is expected to rise but is unlikely to experience a sustainable surge above 3%; however, such a surge, if it were to happen, could prompt the Fed to take earlier action on the monetary policy front than expected. Tax policy changes appear to be en route but need to be sized and timed appropriately so as not to stifle the recovery and U.S. competitiveness. Lastly, financial markets continue to evolve quickly, and changes in valuations and bond yields could prompt us to respond with allocation changes as noted. 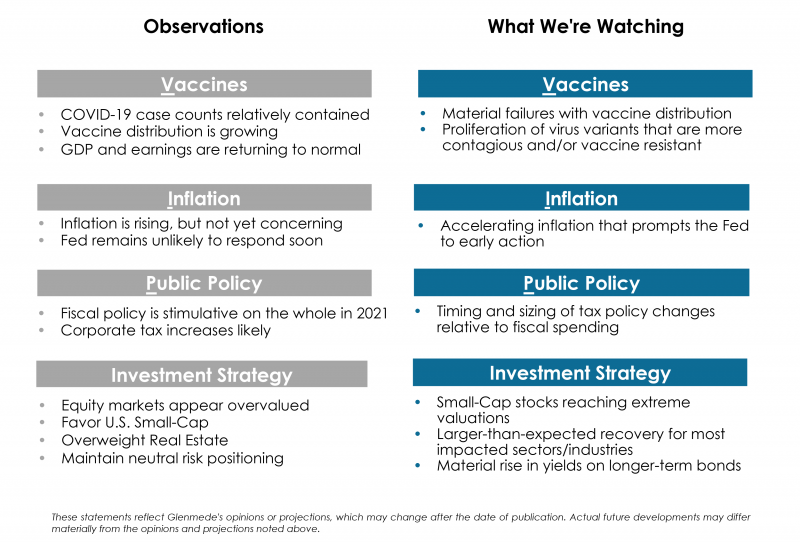 Such simplification may not be quite the equivalent of Einstein’s genius, but by establishing this list of the most important economic and market drivers and identifying key items that may cause us to reassess, we prepare ourselves for both an environment that includes our base case as well as one that does not.

1 The World Health Organization defines herd immunity as the indirect protection from an infectious disease that happens when a population is immune either through vaccination or immunity developed through previous infection. Often, a percentage of the population must be capable of getting a disease in order for it to spread, called a threshold proportion. If the proportion of the population that is immune to the disease is greater than this threshold, the spread of the disease will decline. This is known as the herd immunity threshold.

This writing is intended to be an unconstrained review of matters of possible interest to Glenmede Trust Company clients and friends and is not intended as personalized investment advice. This document is not intended as a solicitation for the purchase or sale of any product or as an inducement to enter into a relationship with Glenmede. Alternative investments, such as private equity, are only available to investors who meet specific criteria and can bear certain specific risks, including those relating to illiquidity. Advice is provided in light of a client’s applicable circumstances and may differ substantially from this presentation. Glenmede’s affiliate, Glenmede Investment Management LP, may conduct certain research and offer products discussed herein. Opinions or projections herein are based on information available at the time of publication and may change thereafter. Information gathered from other sources is assumed to be reliable, but accuracy is not guaranteed. Outcomes (including performance) may differ materially from expectations herein due to various risks and uncertainties. Any reference to risk management or risk control does not imply that risk can be eliminated. All investments have risk. Clients are encouraged to discuss the applicability of any matter discussed herein with their Glenmede representative. Nothing herein is intended as legal advice or federal tax advice, and any references to taxes which may be contained in this communication are not intended to and cannot be used for the purpose of (i) avoiding penalties under the Internal Revenue Code or (ii) promotion, marketing or recommending to another party any transaction or matter addressed herein. You should consult your attorney regarding legal matters, as the law varies depending on facts and circumstances.