Impeachment and politics dominate the news

The impeachment proceedings against Donald Trump represent only the fourth time in U.S. history that the House of Representatives has launched an inquiry into a sitting president. Recent headlines in the Wall Street Journal show the proceedings have begun to dominate political discourse (Exhibit 1). 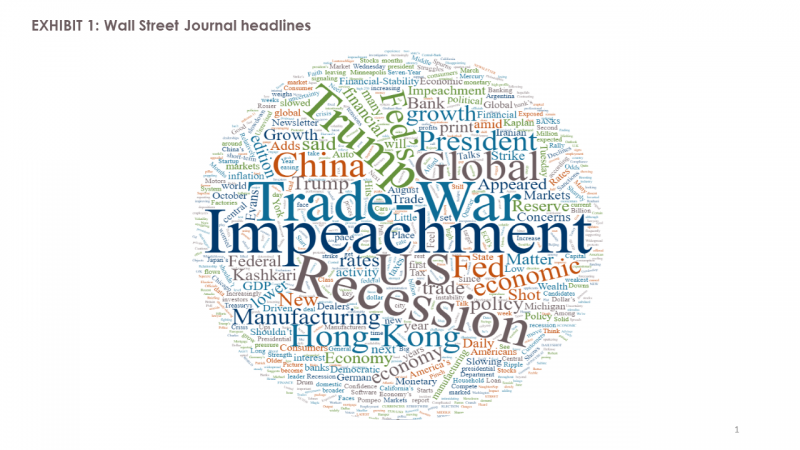 So what is impeachment? It is a vote by the House of Representatives to charge a high-ranking government official with misconduct and start the process of removal from office. The process is akin to a grand jury issuing an indictment in a criminal procedure. The Constitution states that a president may be impeached and removed from office for “treason, bribery, or other high crimes and misdemeanors.”

Public opinion has shifted noticeably as additional details emerged about President Trump’s alleged quid pro quo. The House is investigating allegations that President Trump threatened to withhold military aid unless Ukraine launched a formal and public investigation into one of his prospective Democratic opponents. Although more than half of voters opposed impeachment earlier this year, sentiment shifted in recent months to a majority in favor and a minority opposed, based on CNN’s polling report (Exhibit 2). 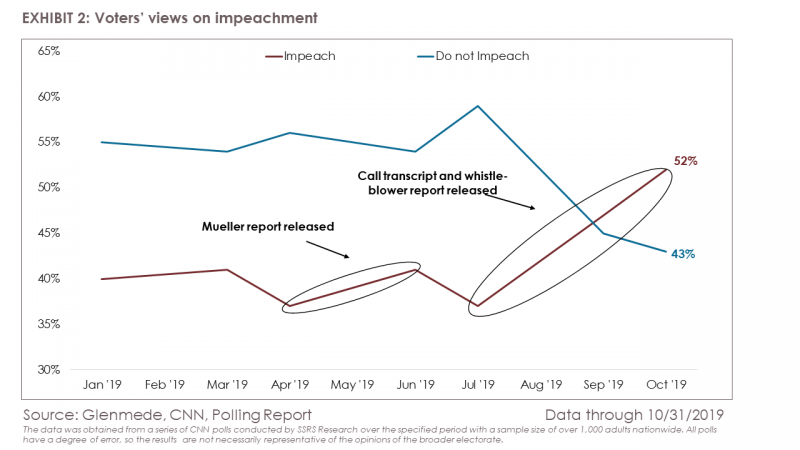 History shows the path to impeachment can take months, starting with the House voting on articles of impeachment and a simple majority required to pass. In the Senate, the Chief Justice of the U.S. Supreme Court oversees a trial. If at least two-thirds of the Senate vote to convict, the president is removed and replaced by the vice president (Exhibit 3). As one can see, not only is this process long and arduous — it is also quite political in nature with multiple opportunities for it to be stopped by supporters of the sitting president. 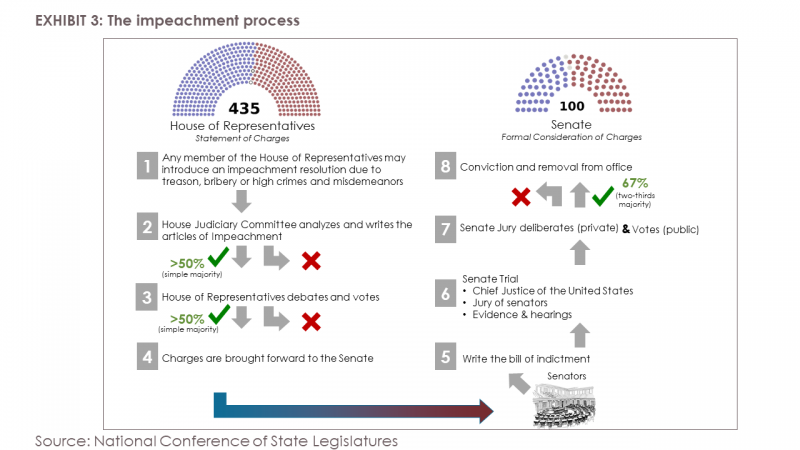 In fact, no sitting president has ever been removed from office through impeachment, in part because of the long, political nature of this process and also due to the ambiguity about conduct representing an impeachable offense. Congress has only drafted articles of impeachment against three sitting presidents in history: Andrew Johnson, Richard Nixon and Bill Clinton. Although the three cases offer insight into the impeachment process, none resulted in a president’s conviction and removal from office. As a result, an essential part of the impeachment process — conviction in the Senate — remains uncharted territory (Exhibit 4). 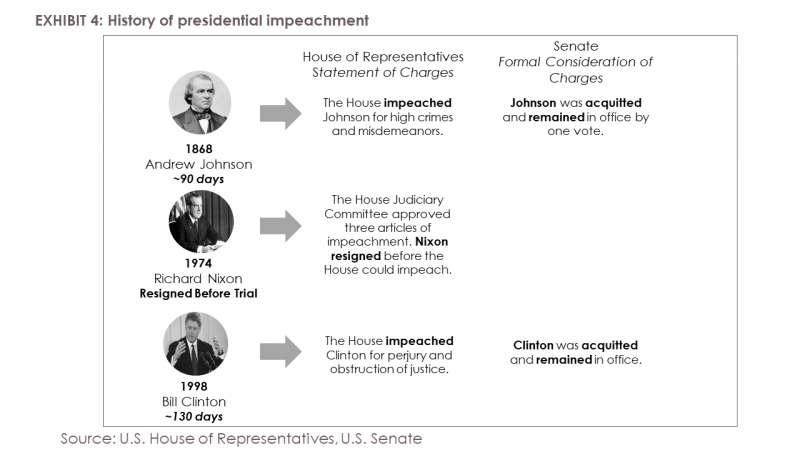 Do markets care about impeachment?

Historical stock market data suggest that impeachment proceedings, although contributing to volatility in the short run, had little overall market impact. In recent history, there have been only two presidential impeachment inquiries, involving Richard Nixon and Bill Clinton. During those proceedings in the 1970s and 1990s, markets were less sensitive to the political upheaval and reacted more significantly to economic events, such as the OPEC oil embargo in the 1970s, the Russian ruble collapse and the implosion of hedge fund Long-Term Capital Management in the 1990s (Exhibit 5). 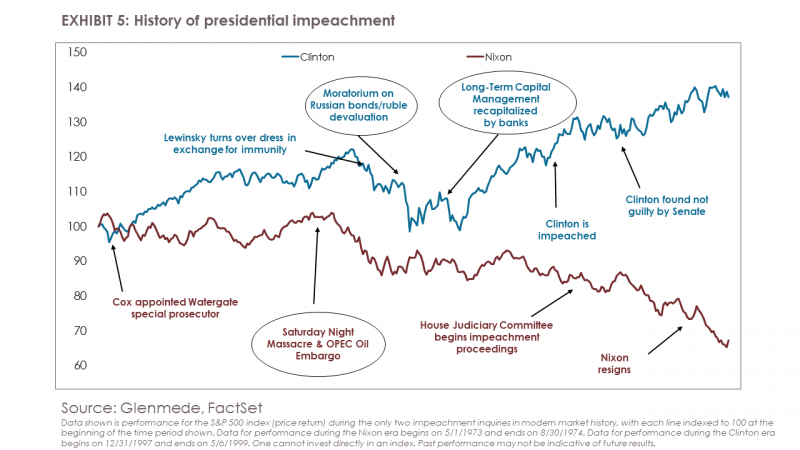 During the current proceedings against President Trump, markets so far have remained relatively steady, hitting all-time highs as recently as November. The most significant impact for markets would more likely be the potential for policy changes if the president were removed from office, rather than the process itself. The market is likely to continue focusing primarily on fundamentals: earnings, valuation and economic data. This time around, trade may be the external event that continues to determine the underlying trend in the markets.

In search of economic relevance

Historically, economics has mattered more than politics for asset returns. The difference this time:  A large portion of the president’s agenda centers on economic issues such as tax reform, trade policy and deregulation. As a result, the market’s reaction to impeachment could begin to reflect an increased likelihood of a political shift to an alternative paradigm as events start to unfold.

Democrats have proposed a comprehensive set of progressive proposals. Even under the best circumstances, a president has limited time and political capital to enact his or her agenda. Heading into the 2020 election, it may be worth taking a deeper look at some of Elizabeth Warren’s economic policies. Her platform is representative of the growing segment of Democrats moving further left of center on economic thinking and provides insight about the possible implications of a fiscally liberal executive. Warren supports more stringent regulation of the economy, including tougher antitrust enforcement, stricter environmental rules and more stringent regulation of financial institutions, drug companies and other industries. Most of those regulatory changes could be done without new laws and some simply through executive action, e.g., appoint aggressive regulators at the Federal Trade Commission and Department of Justice. Other policies, such as the wealth tax and profit tax, as well as breaking up tech giants, would require legislation — a longer, more arduous process (Exhibit 6). This requires a Senate majority and, therefore, most of these big-ticket legislation items would have a minimal chance of moving through Congress without a Democratic Senate majority. 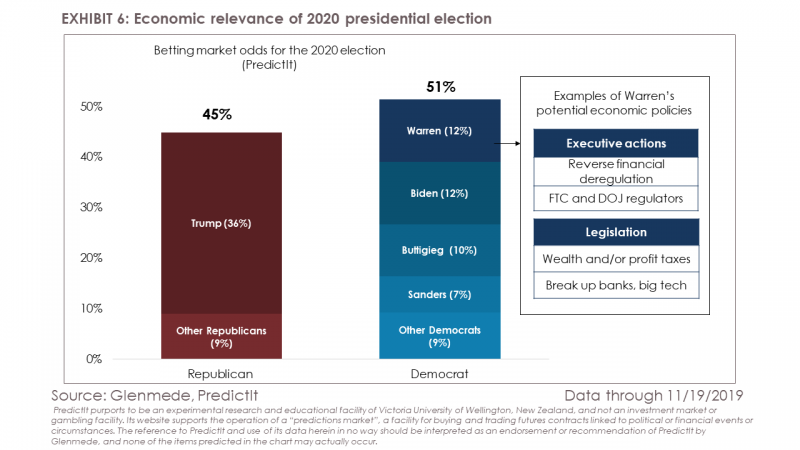 Likely still too early to tell

It may still be too early to extrapolate recent political events to a particular election outcome. There is significant evidence that voters typically do not start paying close attention until just before the Iowa caucuses (Exhibit 7). With roughly three months to go before the Iowa caucuses, many candidates in past cycles led in the polls, but failed to secure their party’s nomination. At this point in 2003, Wesley Clark led the polls for the Democratic nomination, which he ultimately lost to John Kerry. In 2007, Rudy Giuliani and Hillary Clinton both had big leads, and eventually ceded ground to John McCain and Barack Obama, respectively. In the fall of 2011, Rick Perry led in the polls, yet Mitt Romney emerged from the convention as the Republican nominee. The critical takeaway: None of them went on to win their party’s nomination. 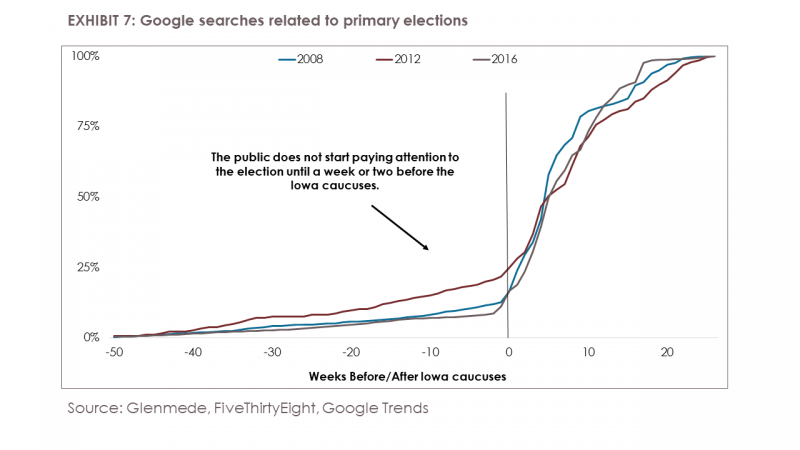 Investors are concerned that impeachment-related political turmoil could add to factors weighing on the economy — the global manufacturing slowdown and trade tariffs — and increase the risk of a near-term recession and market downturn. It’s important to remember that historically, markets have responded to economic fundamentals, which remain sound despite slowing growth. We are still in one of the longest bull markets in U.S. history, backed by the longest economic expansion in U.S. history. At just over 10 years of age, the current expansion has surpassed the record set in the 1990s.

The critical question, however, remains: Could this expansion die from old age and fall into recession? Glenmede’s proprietary recession risk model — a balanced mix of indicators designed to estimate the probability of recession — shows only a slight probability for the next 12 months (Exhibit 8). Our diversified model implies an 9% chance, due in part to the ongoing strength of the U.S. economy and the lack of built-up excesses in the system. 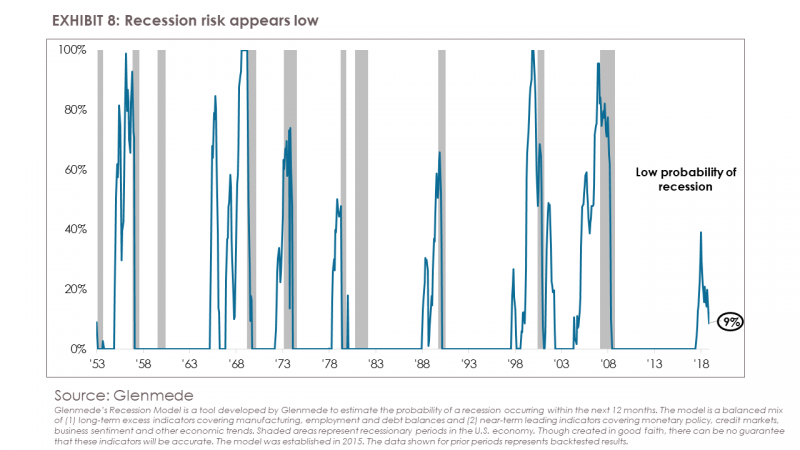 Although we face near-term political turmoil, economic strength has allowed markets to withstand the uncertainty. It is essential for investors to remember that markets care about economics first and foremost — not politics. Investors should remain grounded and disciplined with their asset allocation plans through the impeachment process, upcoming election season and any associated periods of volatility.

This article is intended to be an unconstrained review of matters of possible interest to Glenmede Trust Company clients and friends and is not intended as personalized investment advice. Advice is provided in light of a client’s applicable circumstances and may differ substantially from this presentation. Opinions or projections herein are based on information available at the time of publication and may change thereafter. Information gathered from other sources is assumed to be reliable, but accuracy is not guaranteed. Outcomes (including performance) may differ materially from expectations herein due to various risks and uncertainties. Any reference to risk management or risk control does not imply that risk can be eliminated. All investments have risk. Clients are encouraged to discuss the applicability of any matter discussed herein with their Glenmede representative.