Demographic and economic growth across sub-Saharan Africa is faster than any other region in the world. With the rise of impact investing and the stabilization of some major economies, investor sentiment has turned more favorable towards the continent. This summary review provides a snapshot of private investment fundraising in 2018 and notes some of the sectors and trends of interest.

According to Prequin data, only 11 funds focused on the African continent have reached a final close over the last six months. Of these 11 funds, five had been in the market since 2016 or earlier, suggesting a longer than average fundraising cycle. While six of the funds raised their target amount or more, five did not reach their target. Four funds raised less than $100 million, five funds raised between $100 and $500 million, and two funds raised over $500 million. 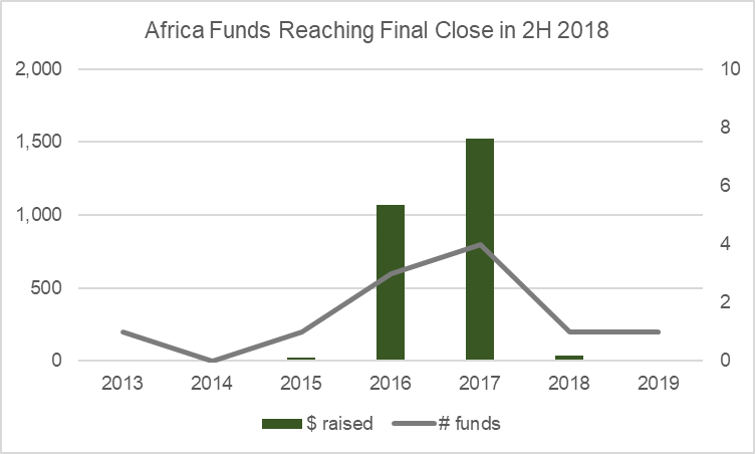 Fundraising in the Market

The story of growing investment opportunity in Africa has certainly garnered significant interest as 100 funds are currently in the market, raising capital for strategies that focus on investments in the space. Collectively, they target over $15 billion of capital, with an average fund size of $155 million.
Strategies vary by sector and geography focus. Some firms emphasize a specific country, like Ethos with South Africa, or a group of countries, as Catalyst Principal Partners does in East Africa. Other firms’ approaches are sector specific, for example, Apis Partners focusing solely on financial services and financial technology or Actis developing renewable energy assets on the continent.

Follow along with Jennifer Wong's Deal Dialogue series on Impactivate®.

This article is intended to be an unconstrained review of matters of possible interest to Glenmede Trust Company clients and friends and is not intended as personalized investment advice. Advice is provided in light of a client’s applicable circumstances and may differ substantially from this presentation. Opinions or projections herein are based on information available at the time of publication and may change thereafter. Information gathered from other sources is assumed to be reliable, but accuracy is not guaranteed. Outcomes (including performance) may differ materially from expectations herein due to various risks and uncertainties. Any reference to risk management or risk control does not imply that risk can be eliminated. All investments have risk. Private equity in particular may or may not be suitable for investors and be subject to additional restrictions. Clients are encouraged to discuss the applicability of any matter discussed herein with their Glenmede representative.