The Crossroads of the Recovery, Inflation and Public Policy

Inflation and the current state of the fixed income market are top concerns for many investors. Earlier this month, Glenmede’s Peter J. Zuleba, III, CFA, Director of Investment Management, moderated a discussion between Rob M. Daly, Director of Fixed Income, and Jason D. Pride, CFA, Chief Investment Officer for Private Wealth, to cover inflation and provide an update on Glenmede’s economic and market outlook heading into the second half of the year. Following are highlights of the discussion.

Why have markets been so strong at the start of 2021?

The S&P 500 has continued its rise this year after a quick rebound in 2020 from the pandemic-induced lows. Earnings expectations are rising materially, vaccinations are accelerating and the U.S. is nearing herd immunity — all factors allowing for more of a return to normal. We are also seeing the benefits of fiscal policies, although the amount of government bond issuance required to support the ongoing monetary stimulus is a concern. 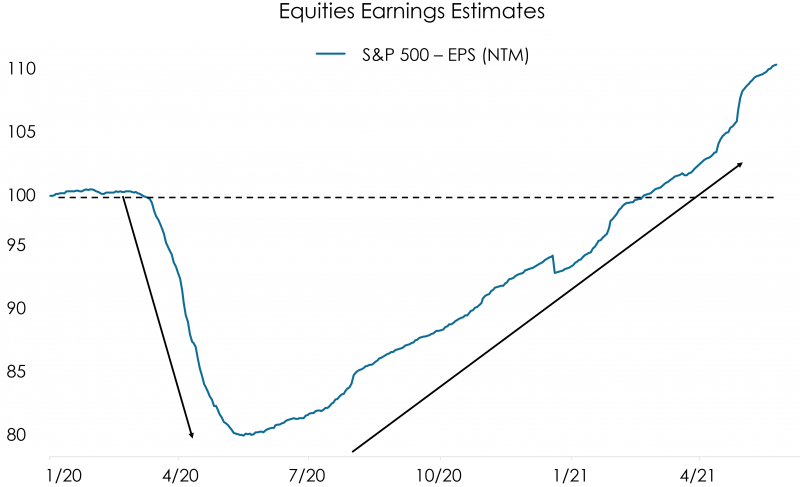 Source: Glenmede,FactSet     Data through 4/14/2021
Data shown is the progression of how next-twelve-month earnings per share estimates for the S&P 500 Index have evolved over time, indexed to 100 at 12/31/2019. The S&P 500 Index is a market capitalization-weighted index of large-cap stocks in the U.S. Outcomes may differ materially from consensus expectations. One cannot invest directly in an index.

What are the potential implications of rising bond issuance?

The Treasury has had to accelerate its issuance of debt to fund the increased spending on relief bills during the pandemic. Net Treasury issuance reached an all-time high of more than $4 trillion in 2020, a staggering amount of new debt. Almost 30% of U.S. debt is owned by foreign investors, with Japan and China the largest owners at 4% each. There are several reasons why foreign investors continue to buy U.S. debt, including:

When will government debt become a major headwind?

It likely will not become material near term. The demand for government debt, both domestic and foreign, is quite stable, but supply is coming down. As some of the stimulus rolls off, the supply dynamic is not going to be as significant. In fact, based on projections from the Congressional Budget Office, with interest rates declining over the past few years, much debt has been issued at lower rates and a lot of higher-yielding debt has been rolling off. The interest on government debt likely will be declining for the next couple of years. This could be an issue longer term, but right now, with the rollout of expensive debt with cheaper debt, the government balance sheet is actually starting to look a bit better. Going forward, with the budget deficit potentially increasing, it could be a problem.

Does the degree of monetary and fiscal stimulus run the risk of stoking inflation?

Absolutely. The magnitude of monetary and fiscal stimulus is large and runs the risk of causing inflation — and inflation appears to be rising. For bond investors, the most direct impact of rising inflation is imbedded into bond yields, leading bond yields to rise substantially since mid-2020. This reflects some speculation by investors that the Federal Reserve will need to tighten monetary policy at some point, although we believe that is a bit preemptive.

NEAR-TERM INFLATION BUMP MAY BE A FUNCTION OF BASE EFFECTS 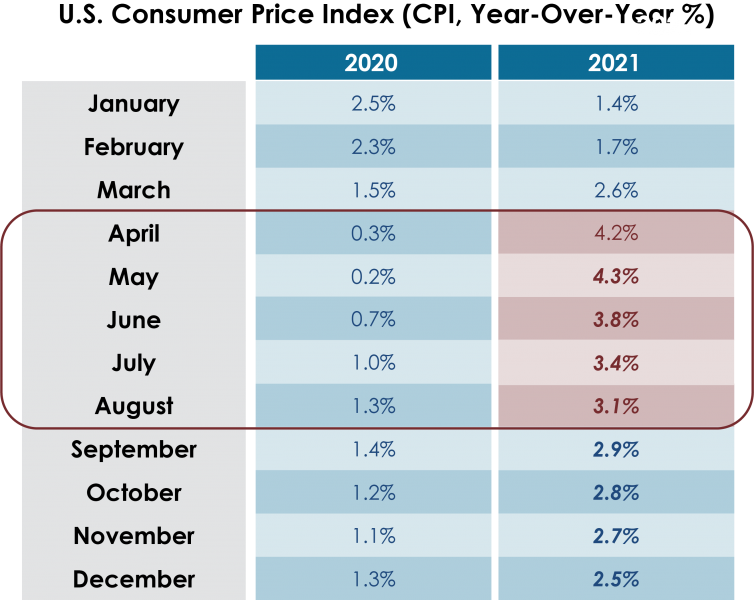 Source: Glenmede, FactSet      Data through 4/22/2021
Data shown in the table is the U.S. headline CPI growth by month, showing both month-over-month and year-over-year percent change. Data in bold/italics are consensus estimates for months in which data are not yet available. Data in red are year-over-year changes in inflation that eclipse the 3% mark. Actual results may differ materially from projections.

What are the expectations for inflation and the Fed?

Using the CPI as a benchmark, inflation is going to be higher, but some of the inflation we’ll see this year will be transitory. However, we don’t want to overstate this. Inflation is likely to settle out higher than it was before, say, 2.0–2.5% instead of the sub-2.0% inflation we’ve experienced over the past decade. That said, we don’t believe inflation will be punitive. There are too many headwinds, like demographics and technology, that will keep inflation relatively muted.

There is another spending bill in the works that seems positioned to be largely funded with corporate tax increases. What are the implications for investors?

The net impact is that the effective tax rate for companies could return to close to the level it was before the Tax Cuts and Jobs Act of 2017. This will have a negative impact on earnings, but it’s important to put it in perspective. The tax changes, as proposed, will shave nearly 9% off 2022 estimated earnings per share (EPS), but 2022 EPS, after these changes, will likely still show positive growth due to the ongoing rebound from the pandemic-related downturn.

AS PROPOSED, THE BIDEN TAX PLAN COULD SHAVE NEARLY 9% OFF 2022 EPS

What can we expect for rates of return in the next year or two?

For fixed income, rates of return will likely be low. Rates moving higher would give us a better return profile, but also hold down returns over that rate-rising period. We wouldn’t count on more than 1.5% annualized from core fixed income over the next year or two. High-yield instruments will likely do better, assuming the ongoing economic recovery. Currently, however, it’s about taking more credit risk to garner a better return within fixed income.

On the equity side of the equation, equity valuations are high as a starting point, which holds back the return expectations somewhat. So we’d expect mid-single-digit to upper-single-digit average returns on most equities, with small caps outperforming and real estate likely to see higher returns. 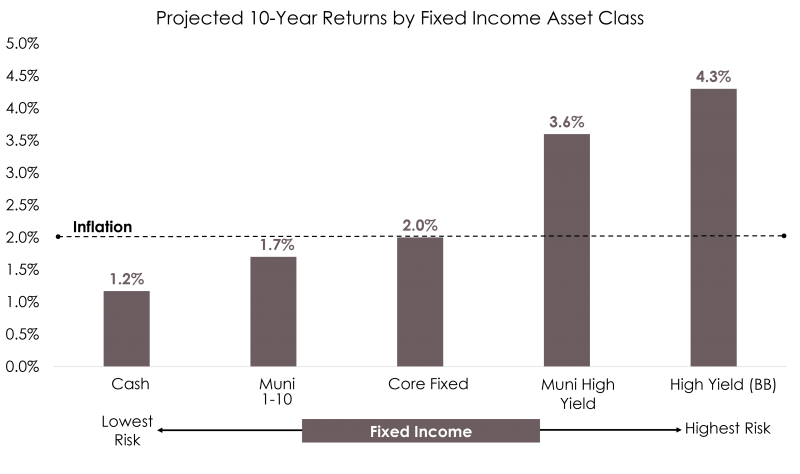 No discussion would be complete without mentioning Bitcoin, which seems to be part of the daily news cycle. Should individuals invest in Bitcoin? Are there other cryptocurrencies to consider?

For a typical investor, the answer is no — for now. The main reason is the monstrous amount of volatility in cryptocurrencies and the lack of visibility on their forward returns. There’s a digital outcome here that cannot be predicted accurately which is creating that high volatility. There are two outcomes: Either those digital currencies will end up being anointed as a true basis for a store of value or for transition, or they will not and will be supplanted by government alternatives, maybe even a digital version of the U.S. dollar. If digital currencies are anointed, their price could be 100 or 200 times higher. If they aren’t anointed, the price could easily fall to zero. With that possible digital outcome, we do not consider cryptocurrencies as a major investment for clients.

Source: Glenmede, FactSet      Data through 5/25/2020
Data shown since October 1, 2013. Stocks are represented by the S&P 500 Index. Bonds are represented by the Bloomberg Barclays U.S. Aggregate Bond Index. Gold returns are derived via the SPDR Gold Trust, which is an exchange-traded fund backed by physical gold holdings. Bitcoin returns are derived via daily prices for bitcoin by Coindesk. Past performance may not be indicative of future results. One cannot invest directly in these indexes.