Global markets are trading significantly lower this week and U.S. stocks have not been spared. The S&P 500 declined ~5% from its peak as reports of coronavirus cases outside of mainland China have spiked. In particular, the number of infected in South Korea has eclipsed 900 and Italian officials have reported 270 cases of their own, suggesting the virus and its associated economic impacts are now spreading beyond China.

Exhibit 1: S&P 500 down from all-time highs on coronavirus fears 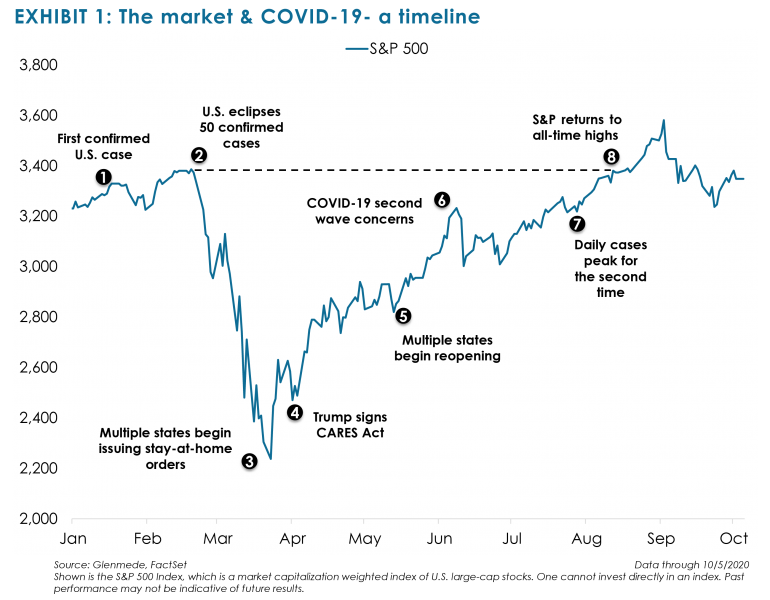 The near-term market correction is quite normal

Pandemics periodically grab the attention of markets and contribute to short-term and, in some cases, intermediate-term volatility. A long and severe outbreak can have a meaningful economic and market impact, but most recent instances have been more contained and well-managed. Longer-term, markets have recovered from such epidemic-related scares. 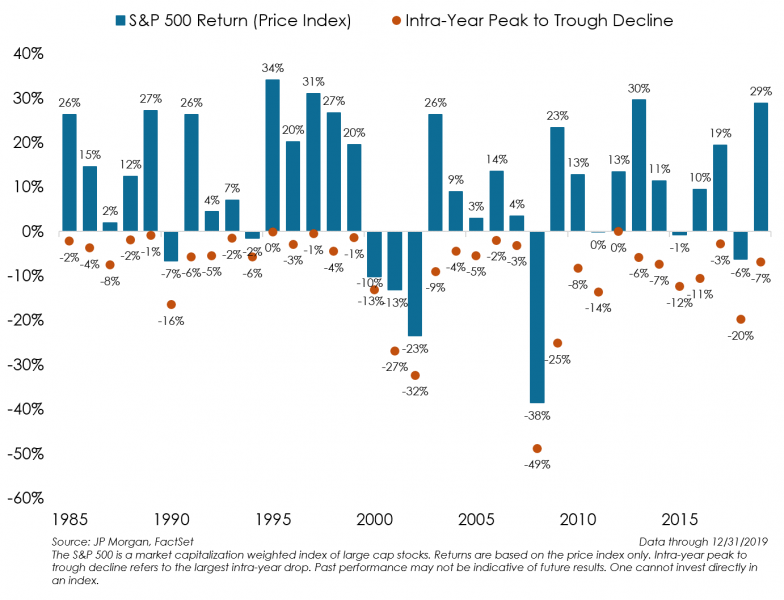 The rapid spread of the Wuhan coronavirus has been shocking and has gathered a significant amount of media attention as reports have surged to almost 80,000 cases and ~2,700 deaths globally. The outbreak has surpassed the number of cases and deaths associated with its 2002/2003 sibling SARS, but has yet to reach levels often associated with pandemics, such as the 1968 Hong Kong Flu that claimed approximately 1 million lives or the 1958-59 Asian Flu that claimed approximately 2 million lives.  In fact, its magnitude and severity are still modest relative to other instances that were never categorized as pandemics, such as the 2017-18 U.S. flu season that resulted in 959,000 hospitalizations and nearly 80,000 deaths, more than 10-fold the magnitude of the current coronavirus.

Through early last week, the virus had appeared contained mainly to China with little evidence of a material spread of the disease outside of those borders. Further, Chinese authorities have taken aggressive quarantine measures to contain the virus. Their efforts, however, have created a fresh headwind to their domestic economy’s recovery from the weakness created by last year’s trade war. So far, the IMF has downgraded its forecast for global GDP growth by 0.1% and many economists are forecasting a 0.5% or more impact on China’s growth; however, the global economic impact of the virus is not yet fully understood. It will likely remain that way until the spread of the virus can be subdued, since such estimates are highly dependent on how far the disease spreads.

Virus slows in China, but spreads outside of China

The spread of the virus within China has finally begun to show signs of slowing down, due to containment actions by the government as well as recovery of previously affected individuals. However, the virus appears to have gained some traction within countries outside of China. The virus has now spread to Italy and South Korea, introducing fresh risks that those economies could face weakness if quarantines arrest business activity there as well. It will be important to watch and see if these countries’ respective governments can manage to contain and halt the progress of the virus.

For the most up-to-date information concerning the coronavirus, please reference the following links:

SARS began to infect thousands in 2003, but the S&P 500 ended the year up 26% (Exhibit 4). The fears around the outbreak were real and markets reflected these fears, but the outbreak and its impact were eventually contained, leading to a market recovery. Investors need to be careful and resist their natural reactionary response to these types of fears. It can be very difficult to predict the near-term spread of the virus and impact of government response efforts. A preferred approach would be to continue to follow longer-term financial and investing plans, rebalancing on volatility, which may provide significant opportunities as such events often prove transitory. 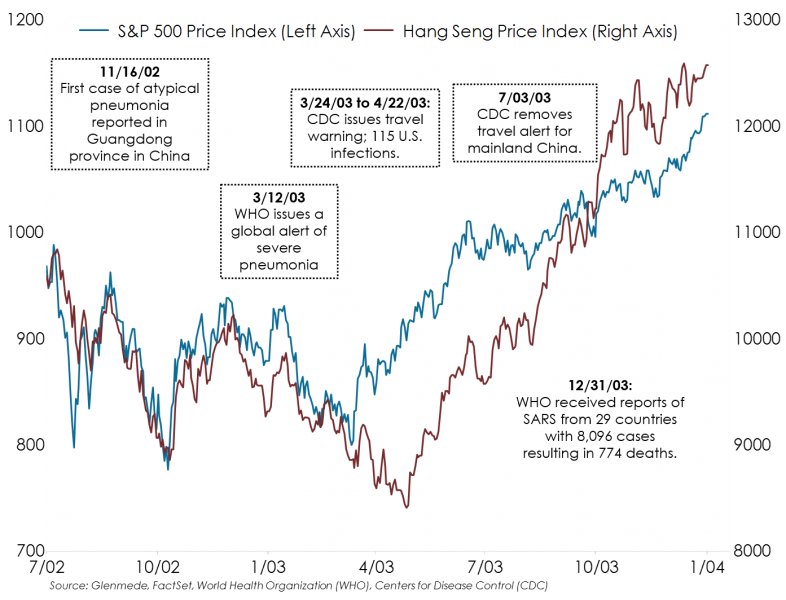 Due to the amount of resources deployed to monitor, contain, and treat the disease, our base case remains that it is unlikely that the disease will spread far enough and have enough of an impact that it would cause a global recession. Nevertheless, the situation bears monitoring and adjustment if the information begins to convey a different scenario.

Investors may feel the desire or need to sell equities in response to the near-term coronavirus-related market decline. However, longer-term, markets typically recover from such declines eventually. Investors, instead, should resist their natural reactionary response to pandemic fears and continue to follow their longer-term financial and investment plans, rebalancing where appropriate. Such plans should employ a well-diversified portfolio, including what is referred to as a “fixed income reserve2” that acts as a primary source of funds for shorter-term spending needs. Such planning prepares for unexpected twists in the market, affording the confidence and ability to ride through market declines and rebounds, staying invested to better meet longer-term goals.

1 Information gathered from third-party sources is assumed reliable but is not guaranteed.

2 “Fixed income reserve” is the portion of a total account that is allocated to fixed income and cash, acting as a near-term source of funds for spending needs during equity market weakness.

Investment Strategy Insights represents a review of issues or topics of possible interest to Glenmede’s clients and is not personalized investment advice. It contains Glenmede’s opinions, which may change after the date of publication. Information gathered from third-party sources is assumed reliable but is not guaranteed. No outcome, including performance, is guaranteed, due to various risks and uncertainties. This document is not a recommendation of any particular investment. Actual investment decisions for clients are made on an individualized basis and may be different from what is expressed here. Any reference to risk management or risk control does not imply that risk can be eliminated. All investments have risk. Clients are encouraged to discuss anything they see here of interest with their Glenmede representative.