UNDERPERFORMANCE IS ATTRIBUTED TO EXTENDED PRICING DISLOCATIONS IN THE SMALL-CAP MARKET
The Glenmede Small Cap Equity strategy’s gross total return of 9.16%, versus 11.85% for the Russell 2000 Index for the year as of August 31, underperformed by -2.69% as investor fears of a global recession led to significant asset mispricing. The strategy’s bias toward inexpensive stocks and avoiding negative-earning stocks fell out of favor in a market favoring high-valuation and speculative stocks without earnings. Poor stock selection in health care and technology also contributed to underperformance. 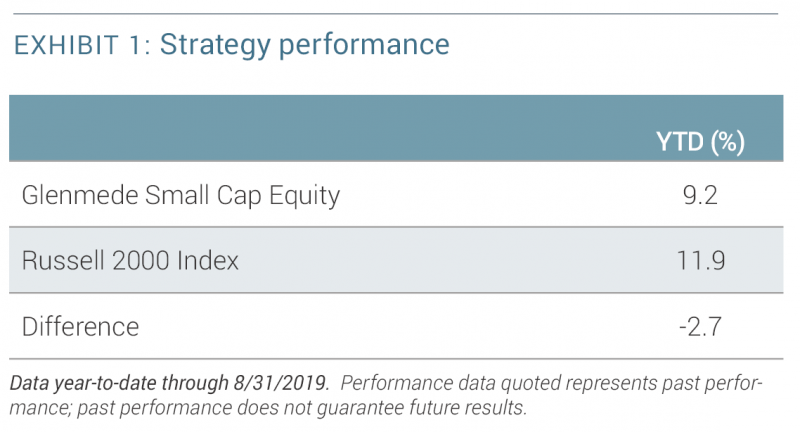 As an active equity manager, we don’t believe financial markets are particularly efficient. Investors consistently display behavioral biases which, in turn, lead to the mispricing of financial assets. Historically, the mean reverting nature of the equity market has rewarded strategies that avoid simply following the crowd. There are times, however, when pricing dislocations remain in place for an extended period. We believe the strategy is in one of these periods. Our philosophy of investing in a diversified portfolio of undervalued, high quality, small cap companies with positive business trends remains challenged, but unchanged. There are myriad factors since the dramatic selloff in Q4 of 2018 that have led to historic disconnects in fixed income and equity markets. In the paragraphs that follow, we outline some of these factors and the impacts they have had on our portfolio.

EXTREME DIVERGENCES WERE DRIVEN PARTLY BY FEAR OF A GLOBAL RECESSION
From our vantage point, the single biggest driver of return divergences over the past 12 months has been investor anxiety over the possibility of a global recession. This fear led investors to reward a few areas perceived to be recession resistant. Generally speaking, large capitalization stocks are favored over small capitalization stocks, and growth stocks with perceived secular growth characteristics are favored over value stocks which are more closely tied to the economic cycle. The result has been significant outperformance by the favored asset classes. Evidence of this phenomenon is seen by the Russell 1000 Index outperforming the Russell 2000 Index by 6.7% year-to-date and the Russell 2000 Growth Index outperforming the Russell 2000 Value Index by 11.2%. Given this extreme market dynamic, our strategy’s valuation bias has hurt relative performance. 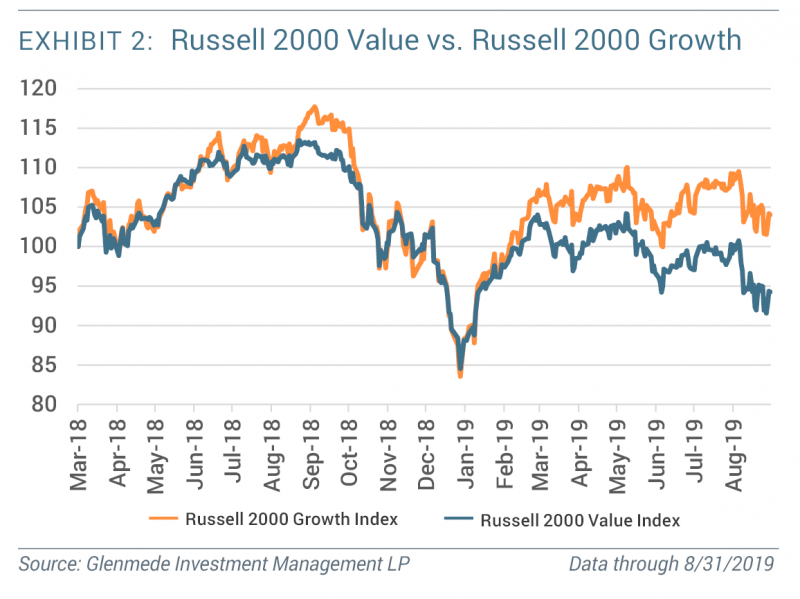 A MAJORITY OF THE INDEX’S RETURN HAS COME FROM HIGH-VALUATION STOCKS WITH NO EARNINGS
Another anomaly that impacted the strategy in 2018 has remained thus far in 2019 — the relative outperformance of high-multiple and non-earning companies. At this point, 37% of the Russell 2000 Index is considered to benon-earning, a level exceeded only following the Great Financial Crisis and the Dot Com bust. The majority of these companies are concentrated in health care and technology sectors and, as shown in the chart below, a majority of the index’s return has come from the non-earning/high valuation buckets. The Glenmede strategy typically avoids companies without earnings as they tend to be more speculative. 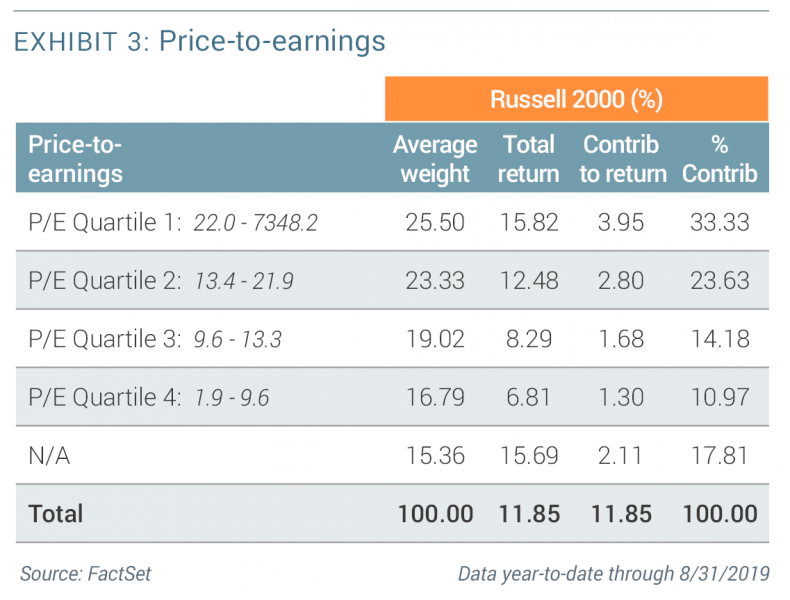 We believe August fund flow data reinforced the notion that investors are concerned about the potential for a recession and a subsequent equity market downturn. Domestic U.S. Equity funds saw $31.2B of outflows in August, surpassing the $30.0B panic outflow of December 2018. A flow of this magnitude tends to worsen existing market trends. If recessionary fears prove to be unfounded, it is likely that these flows will reverse on a similar scale. 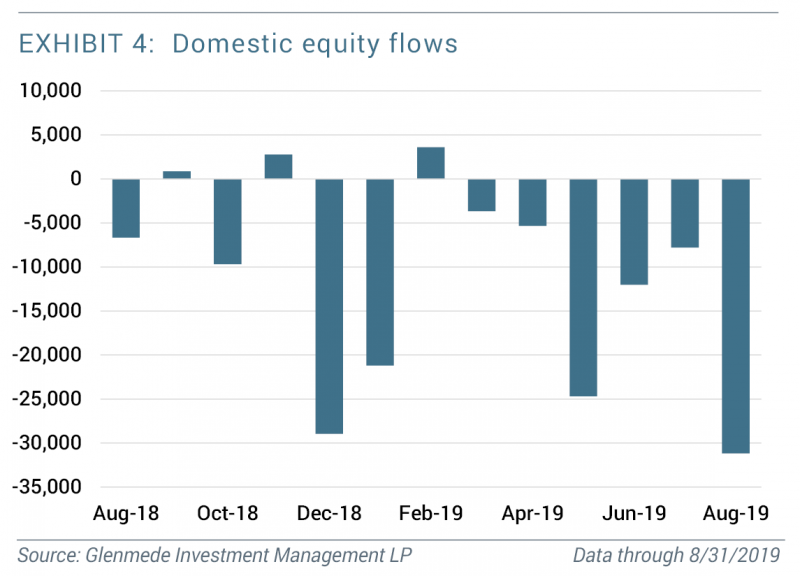 STOCK VALUATIONS ARE LIKELY TO NORMALIZE IF THE U.S. AND GLOBAL ECONOMIES AVOID RECESSION
With all of these dynamics at work, our strategy has been out of favor. We believe the current investment narrative rewards business models that may not provide superior investment returns over time, but are popular in a low-interest/growth-starved world. The market’s bias toward these stocks is not sustainable long term. As the previously highlighted fund flow data shows, a dearth of excess capital flowing into equity markets has not been supportive of multiple investment approaches. Instead, a somewhat binary investment regime has emerged where underperforming investment groups are liquidated in order to chase the outperforming groups. Naturally, this rotation has led to ever-greater performance and valuation gaps.

Our base case estimation is that the U.S. economy will avoid an outright recession and the global economy could see near-term acceleration as central bank easing makes its way into the financial system. Current pessimism surrounding the China trade deal is likely overwrought and markets may be surprised with an outcome that is better than a worst-case scenario. Should this thesis play out, it is likely that fixed income investors will temper their enthusiasm for U.S. Treasuries and interest rates will rise from their current lows. Commensurate with this move, many of the cyclically focused sectors are likely to see a significant reversion to the mean as assets flow from industries that are currently in favor, but trading at valuation extremes, into the inexpensive industries and asset classes.

HEALTH CARE WAS RESPONSIBLE FOR MOST OF THE PORTFOLIO’S UNDERPERFORMANCE
Year-to-date, health care accounted for substantially all of the portfolio’s underperformance relative to the Russell 2000 Index. Poor security selection in the health careequipment and services industry group accounted for the bulk of the damage. The market’s binary investment pattern has seen earnings disappointments aggressively sold, regardless of magnitude. This was the case in a few of the portfolio’s holdings. That said, we’ve maintained our ownership in the shares because we believe the issues are short-term in nature and investors will be rewarded in the coming quarters with more stable earnings.

On the other side of the ledger, we also saw one of our largest acquisitions of the year occur in health care as a similarly beaten down holding was acquired at a 50% premium. It would not be surprising to see the pace of mergers and acquisitions increase in the sector as private buyers are able to acquire assets at attractive valuation levels.

INFORMATION TECHNOLOGY SELLOFFS ALSO HURT RELATIVE PERFORMANCE
Information technology was the strategy’s second-worst performing sector, relative to index, as a result of poor security selection. We added two corporate data security companies in early 2019, both trading at attractive valuations due to operational missteps in prior quarters. Once again, investors sold the companies on perceived earnings disappointments, despite their attractive valuations.

The portfolio’s exposure to the semiconductor industry group has been a source of alpha year-to-date and should benefit from any economic improvements.

COMMUNICATIONS SERVICES HAS BEEN THE STRATEGY’S BEST CONTRIBUTOR
Communications services has been the strategy’s best-performing sector year-to-date relative to the index. The strategy owned a broadcasting company considered mispriced as investors focused on near-term operational and regulatory headwinds, rather than earnings potential. As these concerns abated, shares appreciated and the strategy sold the holding for a meaningful gain. 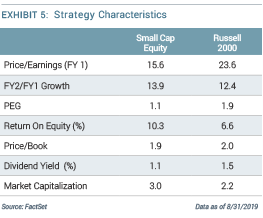 The views expressed represent the opinions of the portfolio managers as of August 31, 2019. There can be no assurance that the same factors would result in the same decisions being made in the future. In addition, the views are not intended as a recommendation of any security, sector or product. Past performance is not indicative of future performance. Returns reported represent past performance and are not indicative of future results. Actual performance may be lower or higher than the performance set forth above. For institutional adviser use only, not intended to be shared with retail clients.