The Rise and Fall of Negative Earning Small Caps

The unusual investment environment brought on by unprecedented central bank intervention has led to many distortions in financial markets and has upended many long-standing relationships. A phenomenon that has emerged in the small cap universe is the recent dominance of stocks with negative earnings over those with positive earnings. In the paragraphs that follow, we will examine the long term relationship between the two groups and contrast that with the more recent investor experience. We will then examine the Russell 2000 Index to identify prior periods in which negative earning companies had a significant representation. Additionally, we will highlight the impact that negative earners within the Biotech industry have had on the outsized returns of that industry group. Finally, we will demonstrate that during cyclical periods in which negative earning stocks are rewarded, traditional portfolio risk metrics can be inverted. Ultimately, we aim to show that there are episodic periods in which negative earning companies are favored by investors, but that these periods tend to be short-term in nature and typically are resolved through significant price erosion. 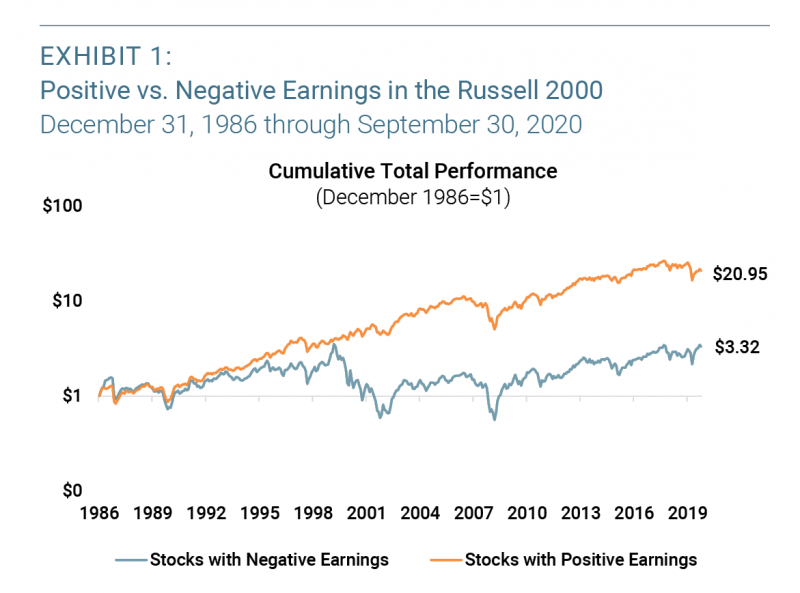 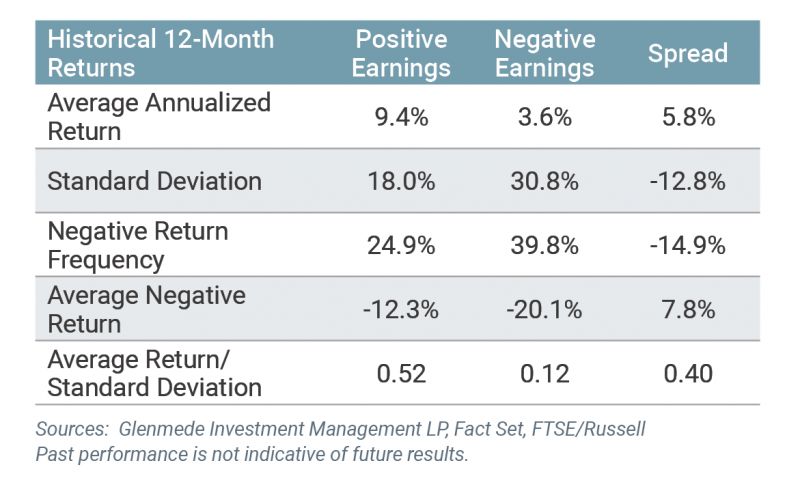 A significant portion of this outperformance was generated by avoiding the large drawdowns seen in the collapse of the Internet Bubble in the early 2000’s and the Financial Crisis in 2008. The Internet Bubble, in particular, saw negative earning stocks significantly outperform before enduring an epic collapse. The Financial Crisis did not see such a dramatic period of outperformance prior to the collapse, but did see negative earners substantially underperform during the crisis. A powerful rally in negative earning stocks ensued once the Federal Reserve initiated some of the unconventional banking operations that exist to this day.

Exhibit 2 highlights the differences in annual performance of the two buckets and indicates that periods of negative earner outperformance tend to be cyclical, but not persistent. 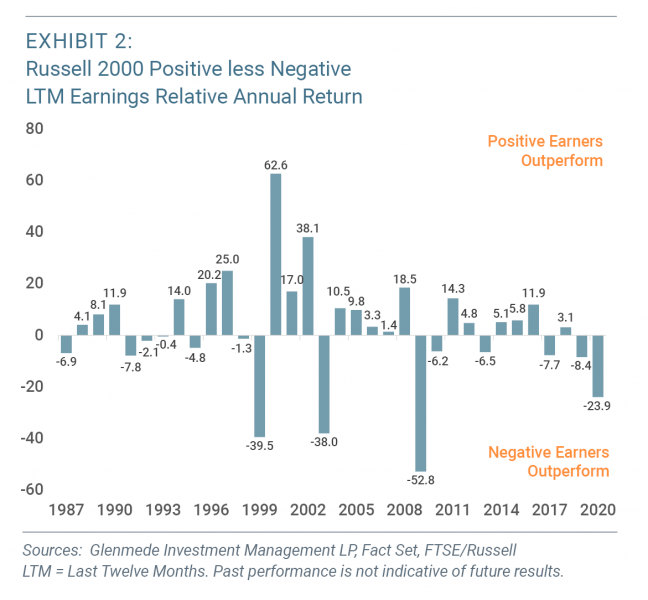 The cyclicality of negative earners' outperformance is easily seen, as is its typically short-lived nature and commensurate underperformance as investors return to favoring positive earning stocks. As of Q3 2020, the level of negative earner outperformance is only outpaced by the dramatic swings associated with the Internet Bubble’s inflation/unwind, and the powerful junk rally in 2009 following the Financial Crisis. In other words, the current period has been extreme. 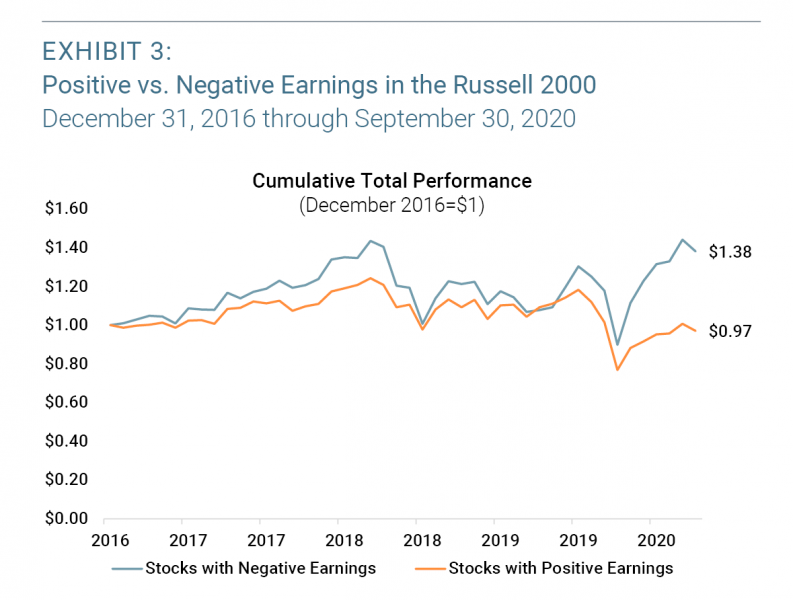 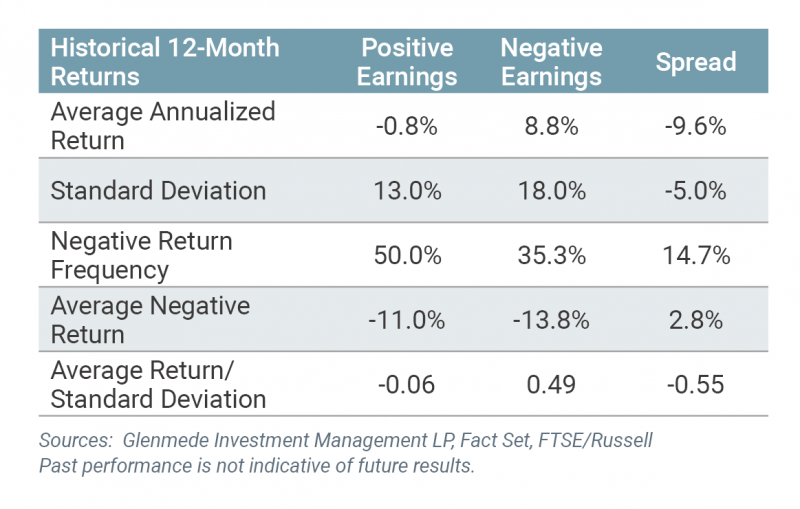 Given that small cap companies tend to be newer and less mature businesses, the Russell 2000 Index will always have a significant portion comprised of negative earners. Over time, these companies will typically become more established and begin to generate earnings, they’ll become acquisition candidates, or they will no longer remain going concerns. In Exhibit 4, we’ve broken out the percentage of negative earners in the Russell 2000 Index going back to 1993 on a rolling 12-month basis.2 As of Q3 2020, 30% of the Russell 2000 reported negative earnings on a last twelve month’s basis, a record level surpassing the speculative Internet Bubble and the post Financial Crisis rally period. 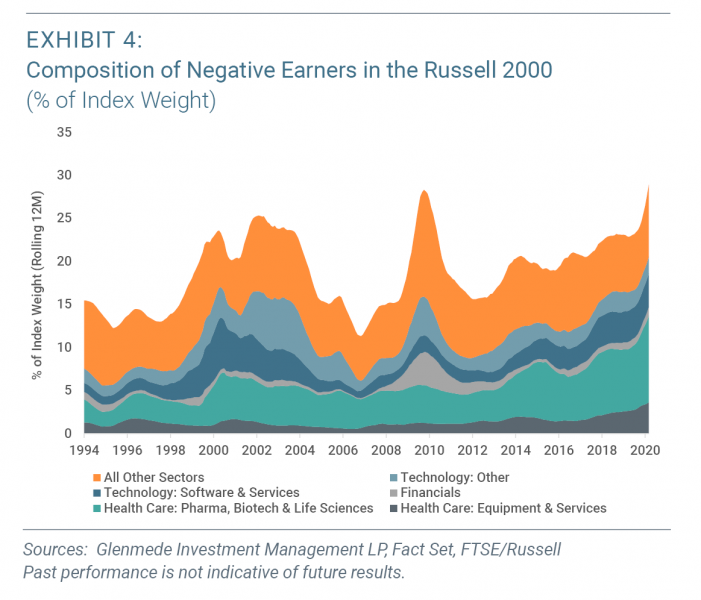 For illustrative purposes, we have chosen to highlight the industries that have accounted for the majority of the benchmark’s growth in negative earnings over time. During the Internet Bubble in the late 1990s, it was the Technology related industries that contributed most heavily to the benchmark’s growth in negative earners and their outperformance. As to be expected, it was the Financials sector that saw an uptick in the percentage of negative earners during the period following the Financial Crisis in which central bank policy kept impaired businesses afloat. These industries then reverted back to their more normal historic levels as the performance drawdowns discussed previously impacted negative earners more significantly than the positive earners.

If past is prologue, it is worth taking a deeper look at the negative earning industries that are most heavily represented in the benchmark today. The current period has been driven by Technology (Software & Services) and Health Care (Pharma, Biotech & Life Sciences). Negative earning stocks in the Healthcare industries have contributed most heavily to the increased weight of negative earners in the benchmark and, therefore, are worth a deeper look.

Having established where the highest representation of negative earners resides in the benchmark, it is worth examining how these securities have performed. Exhibit 5 shows the significant outperformance of companies with negative earnings within the Pharma & Biotech industry group in recent quarters. 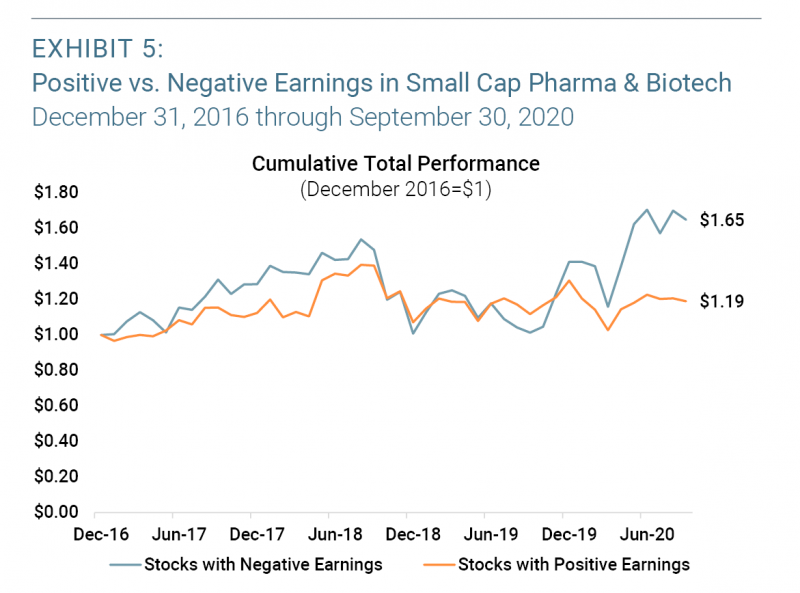 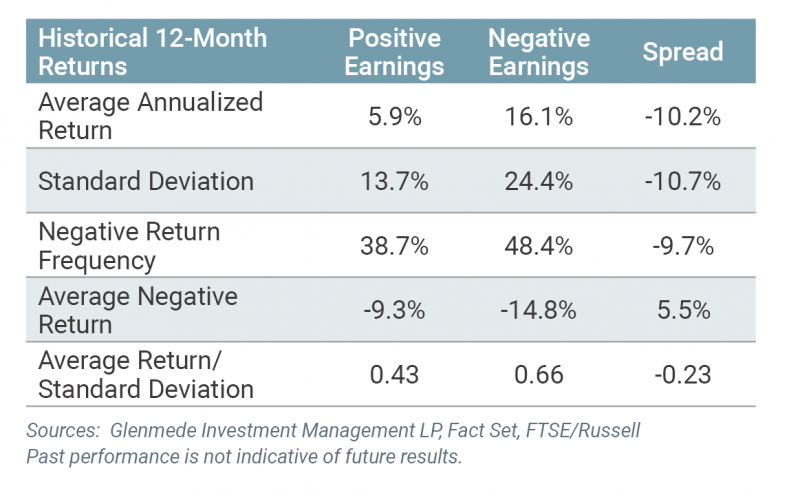 As can be seen in the table in Exhibit 5, the negative earners in this group have shown more downside risk than the positive earners. But the current period has seen significantly more upside returns from the companies with negative earnings as well. Ultra low interest rates and the COVID pandemic have allowed many of these negative earning stocks to see significant levels of outperformance and, in fact, to rank among the best performing stocks in the benchmark.

That said, however, Exhibit 6 takes a look at returns going back to 1993. Small Cap Pharma & Biotech stocks with negative earnings do periodically have substantial periods of outperformance, but have tended to experience significant draw downs in subsequent periods. In general then, it would appear that avoiding companies with negative earnings in this industry group would have been a winning strategy. 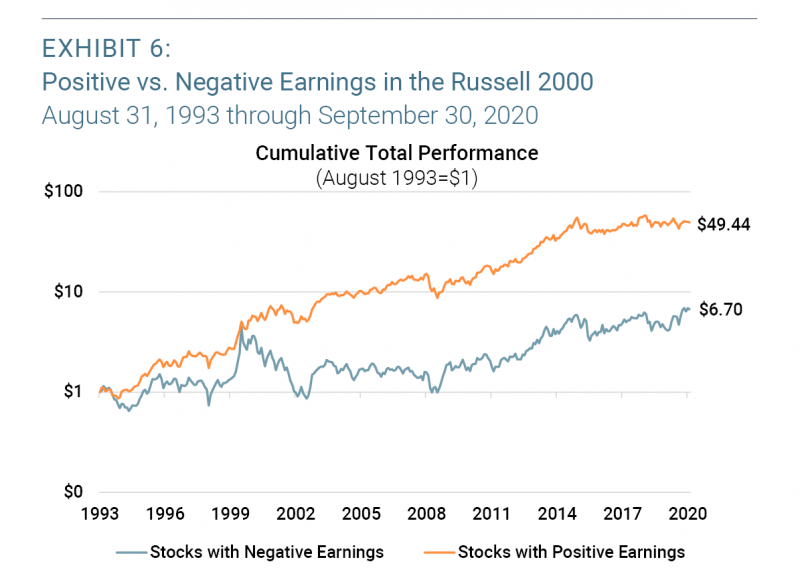 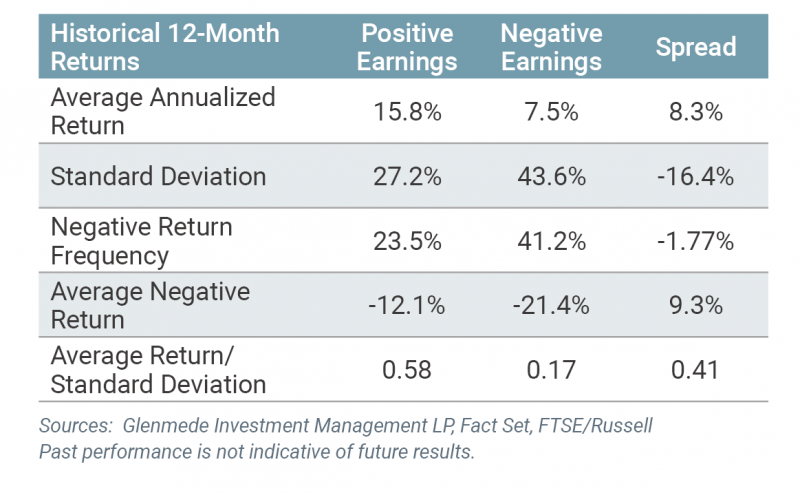 In conclusion, historical evidence suggests that periods of outperformance by negative earning stocks is not a new phenomenon. This outperformance has tended to be cyclical, not persistent, and concentrated around speculative environments. Over the past three years, negative earning stocks concentrated in the Pharma & Biotech industry have held a clear performance edge over their positive earning peers. It is our view that while the current period has proven to be of a longer duration than typically seen, it will end up proving to be cyclical as well. As a result, investors should expect to see mean reversion in which stocks with earnings retake their leadership position relative to stocks with negative earnings as the latter group experiences share price erosion. 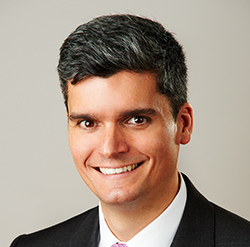 1 We have defined a positive earning company as one with a postive EPS number over the trailing 12 months.
2 This start date was chosen due to availability of industry data.

The Russell 2000 Index is an unmanaged, market value weighted index, which measures performance of the 2,000 companies that are between the 1,000th and 3,000th largest in the market. One cannot invest directly in an index.