A Bumpy ROAD TO NOWHERE- HEADLINES around this quarter:

However, when all was said and done, the U.S. Treasury 2- to 10-year curve reverted, crude oil finished 7% lower than last quarter, and the S&P 500 Index finished up only a paltry 1.7%. In fact, when looking at a quarter-over-quarter comparison, the realized volatility of the index relative to the tight ~6% price range experienced over the quarter was the highest it has been in 90 years, as seen in Exhibit 1. In short, the S&P 500 Index saw more whipsaw price action than typical, but in a tight range that ultimately did not move directionally with any conviction. 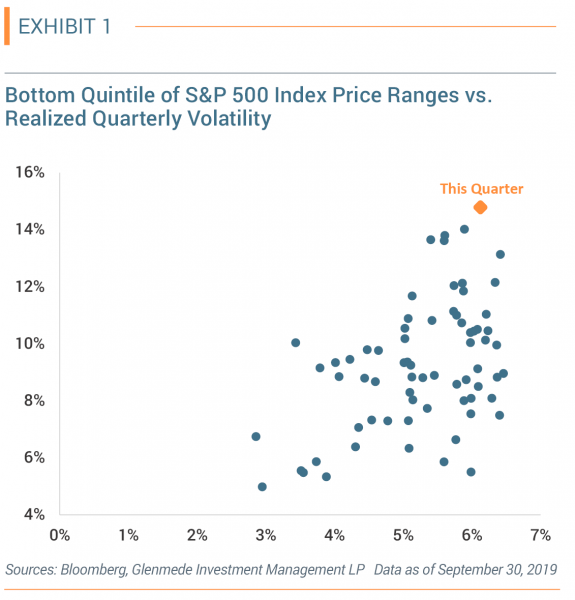 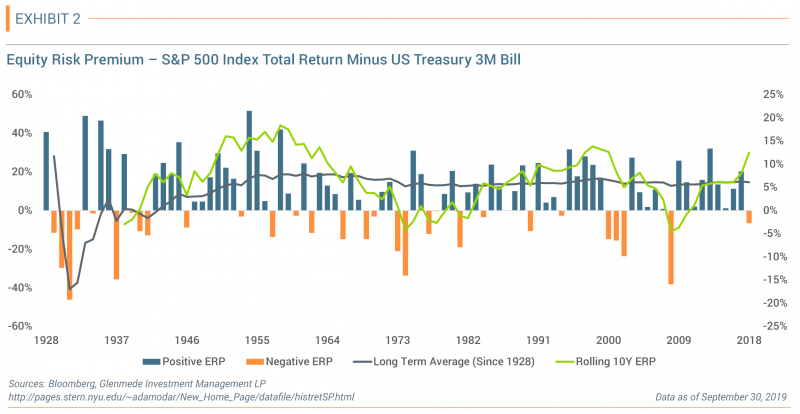 Compared to the post-war expansionary period of the 1950s and the extremely elevated valuations of the dot.com period, our current economic outlook suggests that we are in a later stage of the economic cycle with reasonable, albeit slightly rich, valuations. This difference leads us to believe that a more muted normalization of the ERP of ~5-6% over the next decade is reasonable.

Another common way of calculating ERP also aligns with this belief. Using the inverse of the PE ratio minus the risk free rate (U.S. Treasury 3-month bill), the current ERP is ~4%, which is a touch below its long-term average since the mid-1950s of ~6%. In short, we believe the ERP remains attractive, but may be slightly below its historic trend over the next decade. Within fixed income, there are several risk premia including credit, duration and term. In this writing we focus on the term premium as a measurement of the risk compensation for holding longer maturity bonds (e.g. 10-year U.S. Treasury Bond) versus shorter maturity products (e.g. 3-month U.S. Treasury T-Bill). We think this premium is currently the most compelling to discuss given the current negative relationship between the term structure and compensation for risk.

While not an exact calculation of term premium, the spread between the 3-month and 10-year U.S. Treasury yield is sometimes used as an approximation. At the end of Q3 2019, the spread was -14 bps, suggesting investors are not being compensated for holding longer-term bonds.

A more accurate calculation for term premium is the difference between a long-term bond’s yield and the expectation of the risk-free rate over the life of the bond. More simply, the compensation for commitment. Academics and econometricians have created several multi-factor models to account for the complexity of calculating term premium. The consistent theme within 10-year U.S. Treasury bond models is that term premium has been declining over the past decade and at times, including now, has been negative.

Two such models used by the Fed are the Kim-Wright (KW) and Adrian, Crump, and Moench (ACM), both now at their lowest levels on record, as seen in Exhibit 3. While these models assume an arbitrage-free, multifactor term structure, KW also incorporates survey results from professional forecasters on short-rate expectations. Use of the ACM model started in 1961 and the KW model was incepted in 1990. 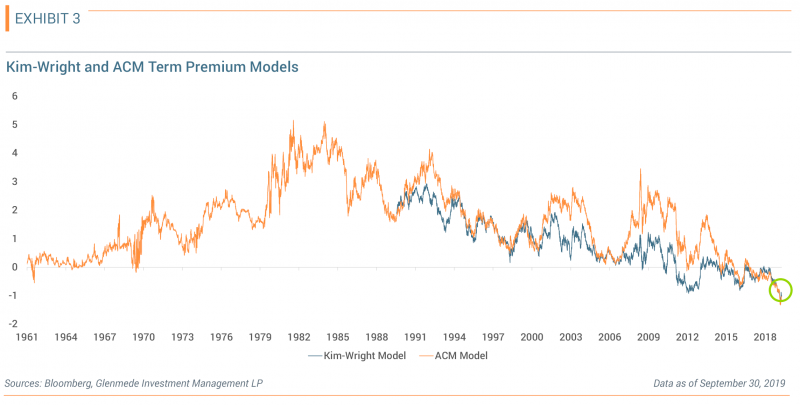 The negative term premium observed by both models can partly be attributed to accommodative monetary policy since the Great Recession. From a portfolio construction standpoint, these extreme negative levels would suggest that mid-to long-term bonds are unattractive at current levels for investors who are not required to hold longer dated Treasuries to hedge long-dated liabilities. We believe investors who want to maintain U.S. Treasury exposure should concentrate positions in the 2-year part of the curve or shorter.

The VRP exists, in part, due to a behavioral bias known as loss aversion which suggests that investors are willing to sacrifice a small but certain amount of return to stave off a larger and more uncertain loss. Investors typically use one of the following three liquid vehicles to gain exposure to the VRP—futures, options and swaps. While we focus here on the VRP exposure accessible via S&P 500 Index options, for more detail, please refer to our whitepaper.

VRP can be calculated as implied volatility measured by the VIX (CBOE Volatility Index) versus the realized monthly volatility of the S&P 500 Index. Since 1990, the S&P 500 options have averaged a volatility risk premium of ~4.1% and been positive 85% of the time.

As evidenced in Exhibit 4, when the S&P 500 Index experiences more realized volatility, similar to 2008 and 2009, implied volatility also tends to be elevated. This demonstrates that the VRP adapts to market moves. While market shocks can cause underperformance of the VRP, the market tends to adapt quickly to fear and demand for insurance. In other words, good months usually follow bad months in rapid succession leading to faster recovery periods than an equity-only portfolio. 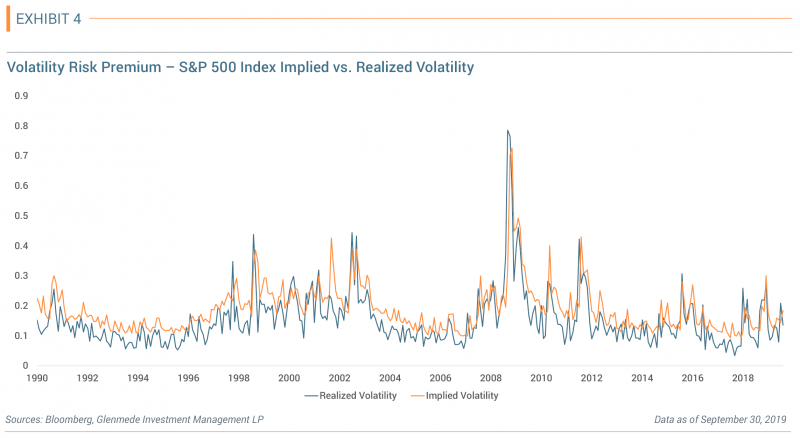 The VRP is a low correlated risk exposure relative to other risk premia. Because its existence is not dependent on equity returns and is due to both structural and behavioral dynamics, we think the VRP should remain at its long-term averages of ~4.1%.

We believe the current market environment offers guidance as to forward-looking risk premia levels. Though equity valuations are trending higher, the expected return equities provide above and beyond Treasuries remains positive, even though our forward ERP expectations are slightly below long-term averages. However, the compensation for term premium in the domestic Fixed Income Treasury market is unattractive. Therefore, for those who are not concerned with matching any long-dated liability exposure, mid- to longer-term bonds remain an unattractive investment. Finally, the volatility risk premium may be a complementary asset with low correlation to a typical stock and bond portfolio. Given the structural and behavioral dynamics underlying the VRP, we expect this premium will also persist. As markets continue to evolve, investor expectations as to the adequacy of the compensation offered for risk across asset classes may change as well. For this reason, we believe an ongoing analysis of risk premia are an important consideration for any investment decision.

All data is as of 9/30/2019 unless otherwise noted. Opinions represent those of Glenmede Investment Management, LP (GIM) as of the date of this report and are for general informational purposes only. This document is intended for sophisticated, institutional investors only and is not intended to predict or guarantee the future performance of any individual security, market sector or the markets generally. GIM’s opinions may change at any time without notice to you.

This report is not intended to be a client-specific suitability analysis or recommendation, an offer to participate in any investment, or a recommendation to buy, hold or sell securities. It may contain information which is not actionable or appropriate for every investor, and should only be used after consultation with professionals. References to risk controls do not imply that all risk is removed. All investments carry a certain degree of risk. Past performance of any strategy, index, area or security is not indicative of future performance. Index performance is provided as a proxy for various market segments; typically you cannot invest in an index. Individual investments may experience performance materially different from that of their relevant index, as a result of market forces and management fees. Information contained herein is gathered from third party sources, which GIM believes to be reliable, but is not guaranteed for accuracy or completeness.

The volatility risk premium is the observation that the level of volatility that is deduced from the price of insurance contracts such as options, called the implied volatility, tends to be higher than the average realized market volatility. Equity risk premium refers to the excess return that investing in the stock market provides over a risk-free rate. This excess return compensates investors for taking on the relatively higher risk of equity investing.