Perhaps more interesting, however, was the rotation within equity style indexes from growth to value. High-growth tech stocks that flourished during the pandemic turned cold, and the Russell 1000 Value Index outperformed the Russell 1000 Growth Index by 10.3%, its largest outperformance since first-quarter 2001. Small-cap stocks also continued their rally which started in earnest in the fourth quarter, pushing the Russell 2000 to its largest one-year outperformance over the S&P 500 of 38.5%. While current equity valuations remain elevated, the potential normalization of corporate earnings could alleviate these concerns.

Though the CBOE Volatility Index (VIX) broke below its psychological level of 20 for the first time since February 2020, the Federal Reserve (Fed) is steadfast in its intention to remain supportive until its goal of full employment with 2-3% inflation is met. This guidance is in spite of the movement of the 10-year Treasury yield, doubling from 0.9% to about 1.7% during the quarter. This dynamic suggests that the yield curve may continue to steepen due to the shorter end remaining pegged and the longer end reflecting the growth and increased supply from fiscal support. It also suggests that opportunities within equities in sector and style allocations like value may abound given growth stocks’ sensitivity to rates. 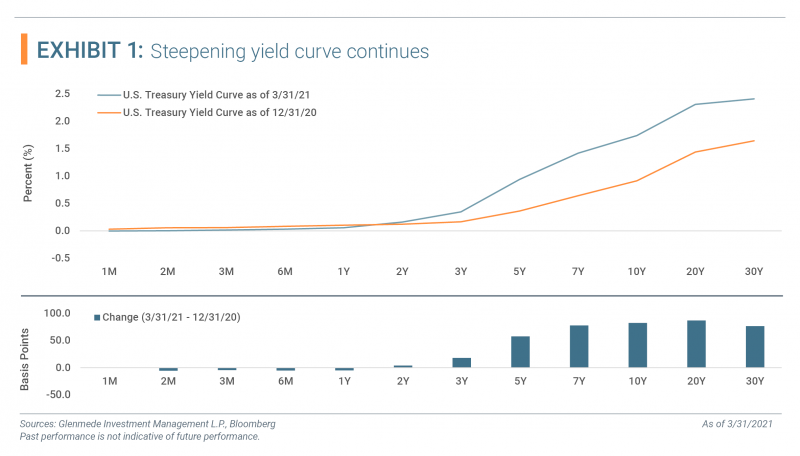 Bond yields rose significantly higher on longer- dated securities in first-quarter 2021. Given market participants’ increased probability of a strong U.S. economic reopening and multiple vaccine rollouts in the quarter, investors repriced yields. This reaction drove a rapid increase in interest rates, particularly on the long end of the curve. Rising rates were attributed to the possibility of higher inflation in an environment of economic growth and the potential tapering of the Fed’s aggressive stimulus programs. For the quarter, the U.S. 10-year Treasury returned -7.0%. The Bloomberg Barclays Aggregate Index, which represents the full domestic bond market, returned -3.4%. The yield curve steepened in the first quarter, with the yield spread between the 2-year and 30-year Treasury closing the quarter at 225 bps, a 74 bps increase.

Going into the second quarter, interest rate volatility has increased amid uncertainty from an economy that is ready to jump start. The vaccine distribution is accelerating and additional fiscal stimulus is expected. Steps the Fed has taken should continue to build confidence and liquidity in the markets. Despite rising inflation expectations, the Fed remains “dovish” and has no plans to raise rates in the near term. We believe there is a moderate risk of inflation, as seen in the recent rise in CPI numbers. An increase in real rates could push Treasury yields even higher. 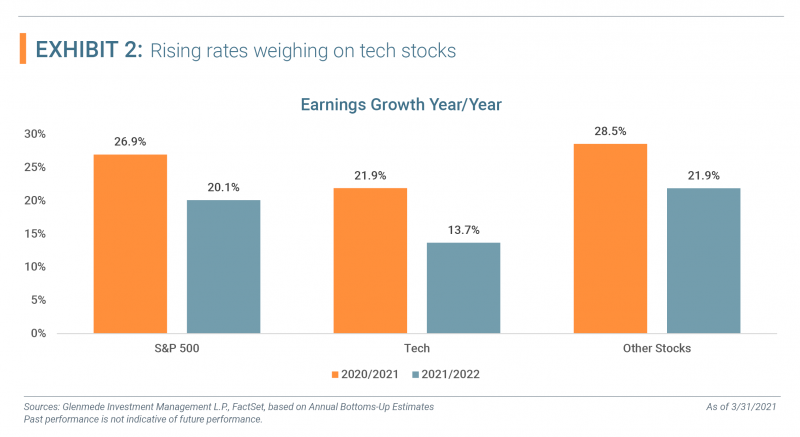 While tech stocks benefited from the swift transition to a virtual environment during the pandemic, S&P 500 corporate earnings are anticipated to demonstrate a broader economic recovery going forward. According to FactSet, earnings are forecasted to increase in the first quarter, largely due to greater-than-expected government stimulus and vaccine progress. An initial big tech sell-off occurred early in the first quarter, spurred by fears of increased regulation. Many tech stocks are in correction territory, with the Nasdaq off its historic highs and many of the major names down double-digits. Meanwhile, Utilities and Consumer Staples rebounded in the first quarter and the cyclical sectors remained strong. Energy and Financials were up double-digits in the quarter, taking leadership of the market rally.

Corporate earnings are expected to normalize in 2021, with most scenarios pointing to a complete recovery in earnings by the fourth quarter. Rising interest rates may continue to move the needle on the growth/value dynamic in the latter’s favor, as value stocks are typically penalized less in rising interest rate environments than their growth counterparts. With the most impacted areas of the economy and markets expected to turn the corner, the earnings recovery could help to further support the rotation from growth to value names.

For 2022, the projected earnings growth rate for the Information Technology sector is 13.7%, significantly lower than 20.1% for the overall market. It is expected to be the third weakest sector in terms of earnings growth from 2021-2022, ahead of only defensive sectors that also held up well in the pandemic (i.e., Consumer Staples, Health Care). Although non-technology stocks have much lower valuations than mega-cap technology stocks, they have higher earnings growth expectations for 2021 and 2022, amid expectations of very strong 5-8% real GDP growth this year. 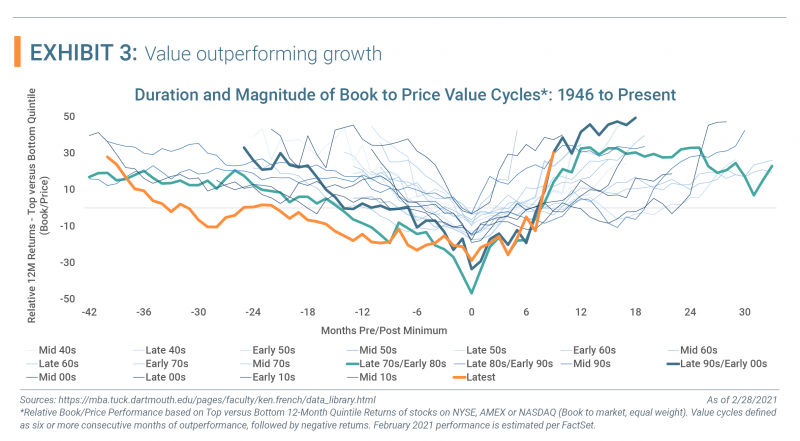 After a continued string of underperformance over the past three years, value has seen a seven-month run of outperformance. Since September 2, 2020, nearly coinciding with positive vaccine news, the Russell 1000 Value has outperformed the Growth index by 20%. Value stocks have performed in step with the rise in Treasury yields during the first quarter, while growth stocks have been pressured. This abrupt turnaround has led some in the industry to question whether this outperformance is just a flash in the pan, or if it is a more sustainable reversal of a trend.

A look at the long history of value performance shows a strong cyclical component, with 19 distinct value cycles in the post-war period. Historically, value drawdowns tend to last an average of about 25 months from peak to trough on a rolling 12-month basis, followed by an average recovery period of about 22 months. On average, value underperformed by -14.7% in its worst 12-month period but outperforms by 30.7% in the best 12 months of the ensuing recovery.

Growth had been outperforming value, led by the mega-cap names, prior to the outbreak of COVID, but was boosted by the pandemic. The outperformance of growth was driven by several factors, including high-earning tech companies. The market was in a state of unknown, where valuations seemed to take a back seat. Valuations now appear more reasonable for value stocks than their growth counterparts, which continue to sit at extreme levels.

There seems to be more optimism for robust economic activity in the back half of 2021, likely fueling the outperformance of value stocks versus growth. Value stocks, typically heavily weighted toward financial and cyclical companies, may have been less preferable in a low-growth environment, but a recovering economy changes that story. We also believe rebounding earnings growth expectations and rising interest rates will likely be key components of the ongoing momentum in value stocks. As the economy reopens, large tech companies that were beneficiaries of the stay-at-home scenario may see their earnings grow more slowly relative to other companies and sectors. 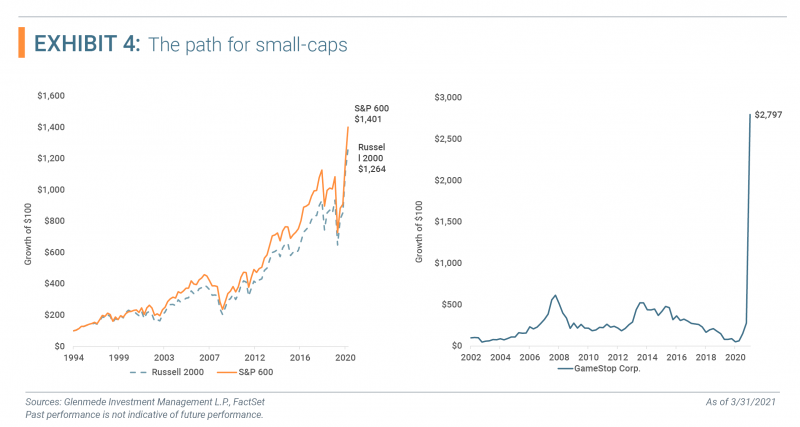 U.S. small-caps took the baton and led the pack in the first quarter, with the Russell 2000 logging a 12.7% gain and the S&P SmallCap 600 index posting an 18.2% return. The corporate profitability requirement for inclusion in the S&P SmallCap 600 leads it to be a higher quality index, resulting in superior returns relative to the Russell 2000 index over time. At the current juncture, a near-record percentage of the Russell 2000 consists of companies with negative earnings, particularly in the biotechnology industry. While this group was favored during the past few years, the tide has begun to turn in 2021.

There was, however, a more idiosyncratic source of the S&P 600’s outperformance. Early in the quarter, a standoff between hedge funds maintaining short positions in a few small companies with questionable fundamentals and retail trades coordinated through Reddit’s WallStreetBets online forum led to dramatic spikes in share prices. For example, GameStop’s (GME) stock price rose almost 400% over the span of a week, driven by a short squeeze. GME and other similar stocks represented significant weights in the S&P 600 and accounted for a sizeable portion of the index’s return.

First, the torrid pace of recovery in small-caps has outpaced the typical post-crisis return seen in the asset class. This could indicate that investors have elevated expectations for a continuation of above-trend corporate earnings growth. Second, it is possible there could be a pause in small-cap outperformance as investors digest the upcoming earnings season and COVID-19 infection rates as they influence economic reopening. Lastly, small-caps could demonstrate superior earnings growth relative to large-caps for the balance of 2021 as a return to a more normal economic environment appears to be close at hand. Inventory restocking and corporate capital expenditures are needed to allow businesses to reopen, and this type of spending should significantly favor small-cap earnings. We are positive on small caps for the balance of 2021, but recognize that near-term performance may be muted as investors digest earnings season and the considerable gains that the asset class has seen over the trailing year. 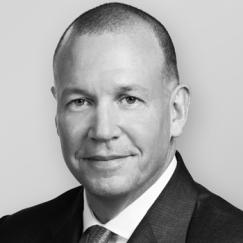 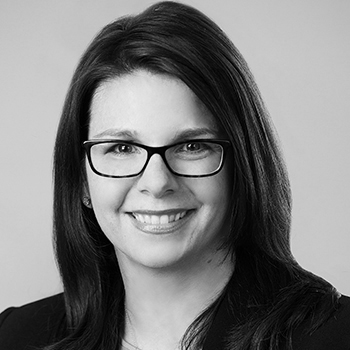 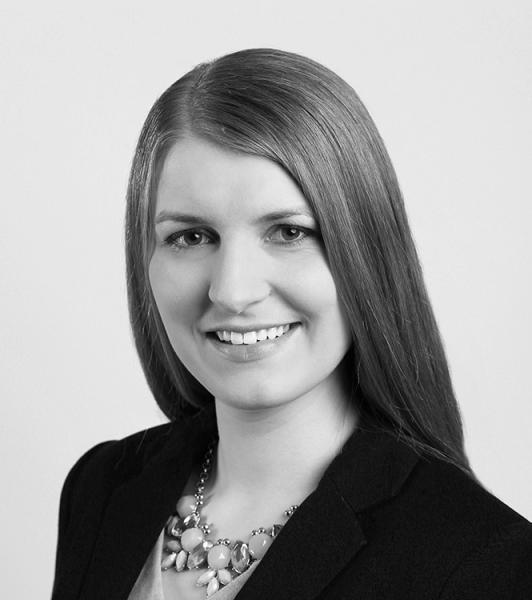 All data is as of 3/31/2021 unless otherwise noted. Opinions represent those of Glenmede Investment Management, LP (GIM) as of the date of this report and are for general informational purposes only. This document is intended for sophisticated, institutional investors only and is not intended to predict or guarantee the future performance of any individual security, market sector or the markets generally. GIM’s opinions may change at any time without notice to you.