This quarter marked historic volatility and the S&P 500’s swiftest drawdown on record. In this quarterly report, we highlight four charts reflecting the extraordinary volatility and market dislocations experienced at the start of 2020. We also cover the potential for an economic recovery dependent on the continued trajectory of fiscal and monetary policy support and the containment of the COVID-19.

Worst Quarter in almost 12 Years –But Not All Bad News

Following a more than 10 year bull market, the S&P 500 Index experienced weakness not seen since the Great Financial Crisis and its worst Q1 in history with a total return of -19.6%. This quarterly drawdown is the fifth worst in the past 60 years. International markets were also not spared from market weakness, with developed and emerging markets falling -21% and -19%, respectively.1 The silver lining, as shown in Exhibit 1 is that since 1960, in the year following a drawdown of at least 19%, the S&P 500 Index experienced a positive total return ranging from +16.6% up to as much as +38.1%. 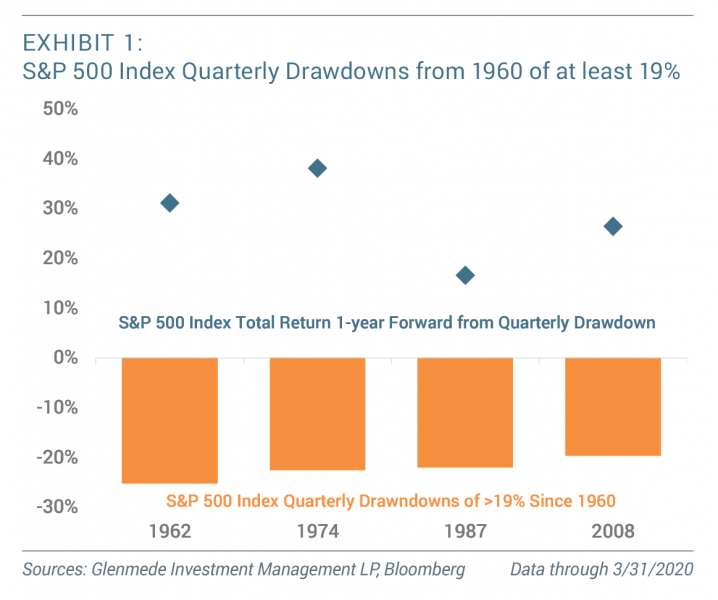 The “Tail” of Two Volatilities

The S&P 500 Index moved from a sustained bull-market to bear market in just 16 trading days, breaking its previous record of 30 trading days in 1929. Following this decline, the CBOE Volatility Index (VIX) closed at a record level of ~82.7 on March 16. When the VIX reaches above 40, a return to a normalized range of 15 to 20 typically takes 5 to 15 months. In 2008 when the VIX closed above 80, similar to the recent highs during the COVID-19 driven sell-off, the VIX took approximately 15 months to return to the more normalized levels. 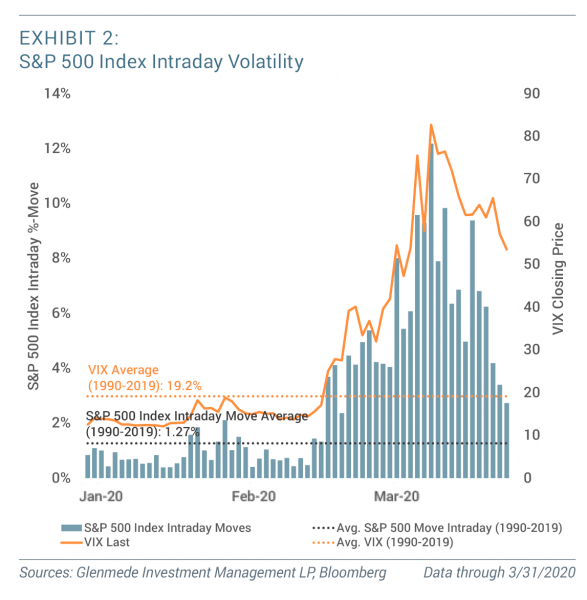 Dislocations and spreads widened to levels not seen across investment grade, high yield, munis and Treasuries. For example, Exhibit 3 illustrates the price of iShares iBoxx Investment Grade ETF (ticker: LQD) vs. its NAV. Until March 19 of this quarter, dislocation greater than 5% from NAV had not been experienced since the Great Financial Crisis. The subsequent reversal to a 5% premium a mere five days later is unprecedented and followed the Federal Reserve’s “monetary bazooka” announced this quarter to support and re-open supply to the fixed income markets, as discussed in more detail in the next section. 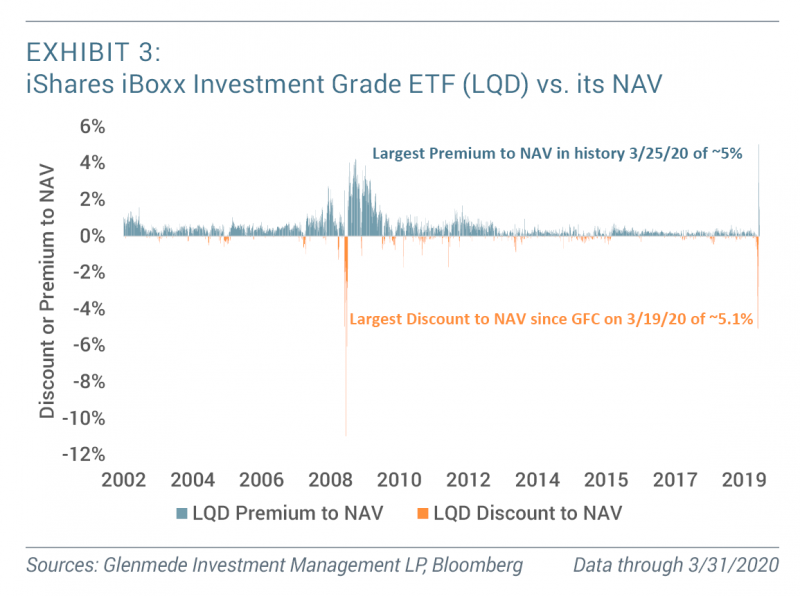 The underperformance of value versus growth was exacerbated this quarter as investors indiscriminately sold equities. As of quarter-end, large cap value stocks (Russell 1000 Value Index) underperformed large cap growth stocks (Russell 1000 Growth Index) by over 18% in the last twelve months (Exhibit 4). This was the largest monthly year-over-year underperformance of value since February 2018 and the dot.com years of 1999 and 2000. Historically, since 1979, value stocks have outperformed growth stocks over the next year by an average of ~16.9% (69% positive frequency) when underperformance reaches these levels. 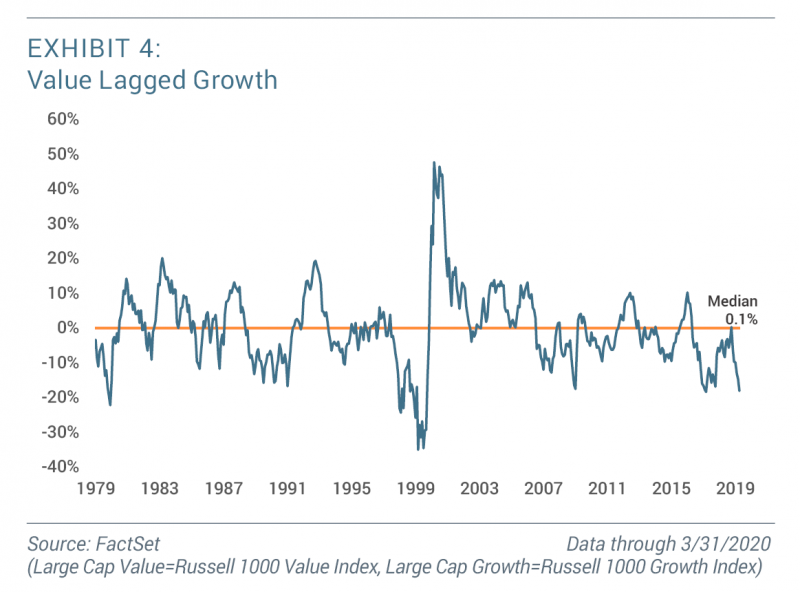 Where do we go from here: the Bull, the Bear and the Base

In order for the markets to return to a sustained bull market, a combination of fiscal and monetary policies, economic recovery and medical breakthroughs will be necessary.

The monetary policies announced to date have been proactive and aggressive. Exhibit 5 shows a timeline of these extraordinary measures that include rate cuts, tools used in the Global Financial Crisis and creation of new facilities with the intent of these combined measures to support market liquidity, businesses, Main Street and municipalities. 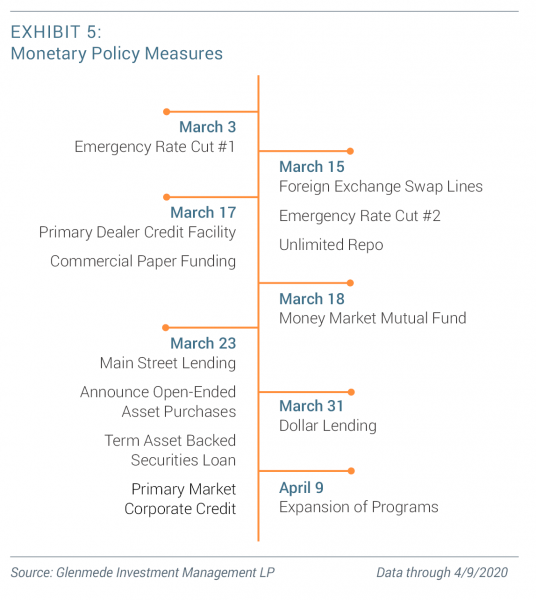 The fiscal policies announced this quarter have also been unprecedented culminating with the Coronavirus Aid, Relief, and Economic Security (CARES) Act signed into law on March 27. This bill was the largest financial stimulus rescue package the United States has ever seen at $2 trillion. The bill included funds for individuals, small businesses, big corporations, hospitals and public health, federal safety net, state and local governments, and education.

Enhanced monetary policy and fiscal stimulus were a direct and drastic response to the COVID-19 pandemic. As of April 14, the S&P 500 Index had retraced 50% of its losses, suggesting that investors viewed these policies as supportive of a recovery. Can the market’s return to a bull market also occur in the shortest amount of time in history, or was this recent retracement just a bear market rally? 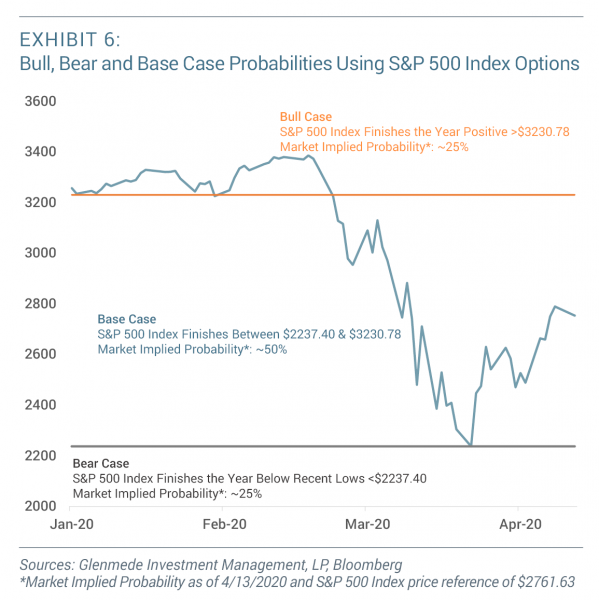 As noted in Exhibit 6, the S&P 500 Index options are implying ~25% probability of finishing the year in positive territory above $3230.78. While in the interim, the market could retest lows, the probability reflects market expectations that the index generates a positive price return at the end of the year relative to the end of 2019.

A "V-shaped" type of recovery is unlikely without some sort of COVID-19 medical breakthrough. Even with a flattening of the curve of new cases throughout the world, without a cure or a vaccine, concerns will remain of a resurgence of an outbreak. From an investment standpoint, the need to stabilize the economy and the associated costs during each of these outbreaks will likely prevent a full financial recovery. We believe further antibody test analysis and the understanding of immunity to this novel virus are imperative for the economy to return to a “new normal” environment by year-end.

While the monetary policies announced offer the support and liquidity necessary for the banking system, this bull case scenario also assumes the fiscal stimulus is maximized and that the economy is able to withstand the short-term impact of business closures. This scenario would likely include a “Phase Four” stimulus package given the economic damage likely to be sustained in Q2 with the “stay-at-home” policies needed to mitigate the risks of the outbreak. The full scope of the needed fiscal stimulus is dependent on the ability to reopen the economy, which again, is expedited with a COVID-19 medical breakthrough in prevention or recovery.

As noted in Exhibit 6, S&P 500 Index options imply a ~25% probability of finishing the year below the March lows of $2237.40. While the trajectory to this point could include more rallies this year, the probability reflects market expectations that index level at year-end falls beneath March lows.

This type of outcome would likely reflect an extended bear market. While event-driven bear markets typically result in a reasonably swift recovery, should COVID-19 inflict sustained economic damage, it could result in a structural bear market with a longer recovery period, resulting in an “L-shaped” recovery.

This bear case assumes any or all of the necessary measures fail. From a medical perspective, continued outbreaks or mutations of the virus make the likelihood of a successful vaccine more difficult. From a monetary policy perspective, the market’s expectations of the effectiveness of the Fed’s tools may decrease. Gridlock or partisan views may prevent further fiscal policy stimulus even when necessary. Unfortunately, we can envision a very dire economic picture as well with the economy failing to find the “new normal.”

Within this base case, the recovery might be “U-shaped.” The assumption to this scenario is that the curve flattens, outbreaks remain a possibility but not a high probability and expectations for a vaccine in the near term versus longer term increase. The monetary policy that has already been announced likely remains in place with the understanding that the Fed “has more tools in its toolkit” if needed. The fiscal policy may or may not have a “Phase Four” stimulus, but we see “green shoots” that the economy may recover faster than feared, but not back to “normal” by Q4.

As the markets digest the improving data of new COVID-19 cases, the narrative is shifting to questions about when the economy can be reopened and the impact of potential behavioral changes on market movement. The current environment’s lack of visibility and clarity could produce periods of notable market volatility and dislocations in the coming quarters. During these periods of indiscriminate selling, we believe active management has the flexibility to be opportunistic in its goal of generating alpha.

1 MSCI EAFE & MSCI Emerging Markets Indices, respectively
2 1990-2019 - Average intraday move (this includes previous days close to high/low period over the next trading day).
Implied probability is a conversion of odds into a percentage. It takes into account the margin to express the expected probability of an outcome occurring.
All data is as of 3/31/2020 unless otherwise noted. Opinions represent those of Glenmede Investment Management, LP (GIM) as of the date of this report and are for general informational purposes only. This document is intended for sophisticated, institutional investors only and is not intended to predict or guarantee the future performance of any individual security, market sector or the markets generally. GIM’s opinions may change at any time without notice to you.
This report is not intended to be a client-specific suitability analysis or recommendation, an offer to participate in any investment, or a recommendation to buy, hold or sell securities. It may contain information which is not actionable or appropriate for every investor, and should only be used after consultation with professionals. References to risk controls do not imply that all risk is removed. All investments carry a certain degree of risk. Past performance of any strategy, index, area or security is not indicative of future performance. Index performance is provided as a proxy for various market segments; typically you cannot invest in an index. Individual investments may experience performance materially different from that of their relevant index, as a result of market forces and management fees. Information contained herein is gathered from third party sources, which GIM believes to be reliable, but is not guaranteed for accuracy or completeness.

Market Update: Charts & Chatter: The Impact of COVID-19 on the Markets

Market Update: Charts & Chatter: The Impact of COVID-19 on the Markets