Washington and the Wall of Worry

An Objective View on Perceived Risks and Investment Positioning

“Doubt is not a pleasant condition, but certainty is absurd.” – Voltaire

“Laws are like sausages, it is better not to see them being made.” – German Chancellor Otto von Bismarck, 1881

Each economic recovery and expansion feels unique at the time investors are going through it, with doubt about the sustainability of the recovery causing unease. However, a retrospective view of past recoveries and expansions shows this is not as unusual as may be perceived at the time. The circumstances and reasons for concern may vary, but markets at this stage often face a metaphorical wall of worry they must continue to climb. Further, these walls of worry are not constant: They shift through time, moving from one set of worries to the next.

EXHIBIT 1: Today’s Market Is Climbing a Wall of Worry 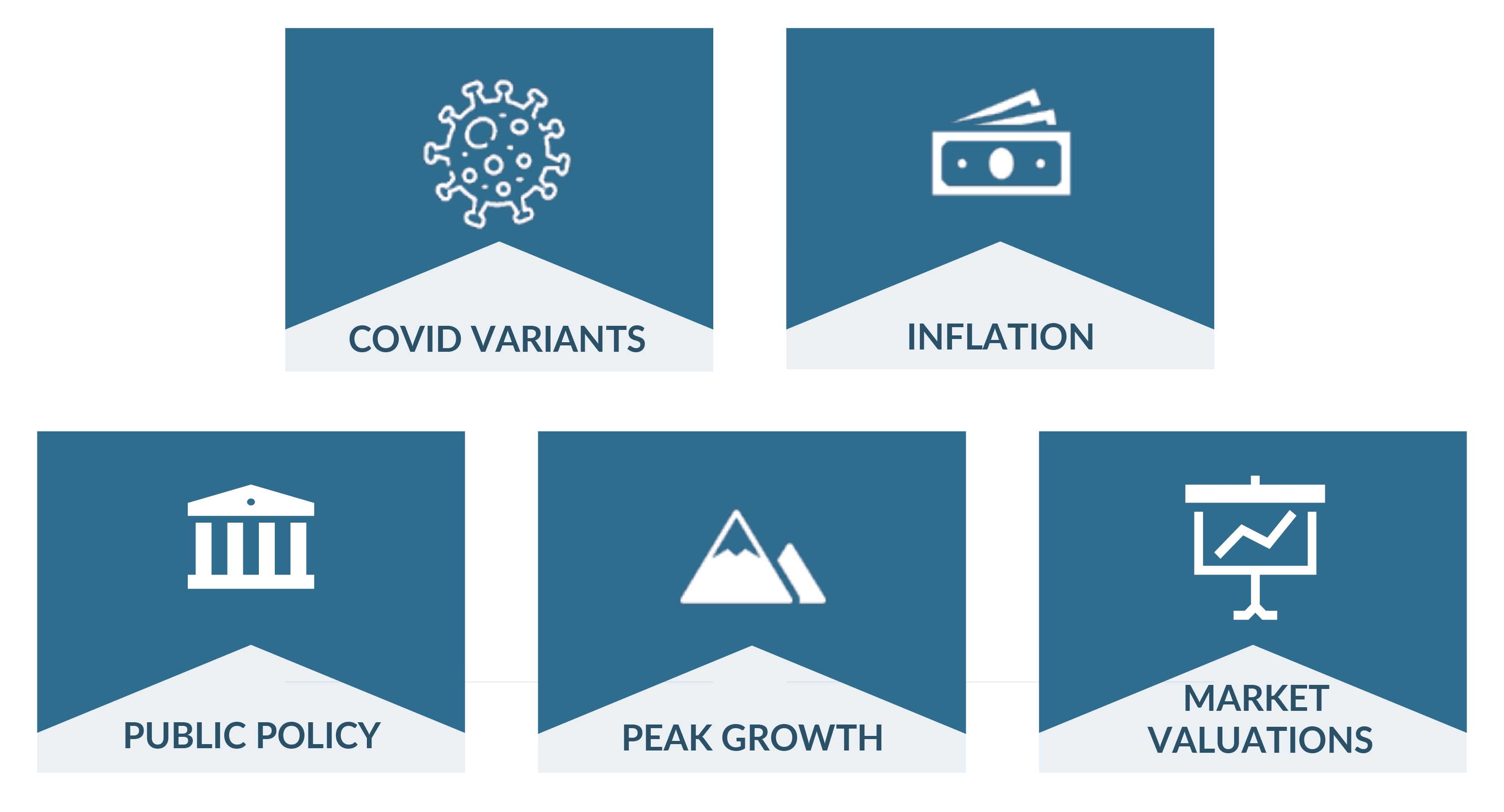 It seems today’s wall of worry is shifting as the fourth quarter begins (Exhibit 1). Concerns surrounding COVID-19 and its variants remain but appear to be moderating in magnitude and importance. Concerns persist about inflation but have become somewhat less pronounced. More prominent bricks in that wall today appear to be concerns about peak growth, Washington negotiations surrounding the large American Jobs Plan and American Families Plan as well as the debt ceiling, and the overall valuations of the majority of financial assets.

COVID-19 variants: Another surge and another decline 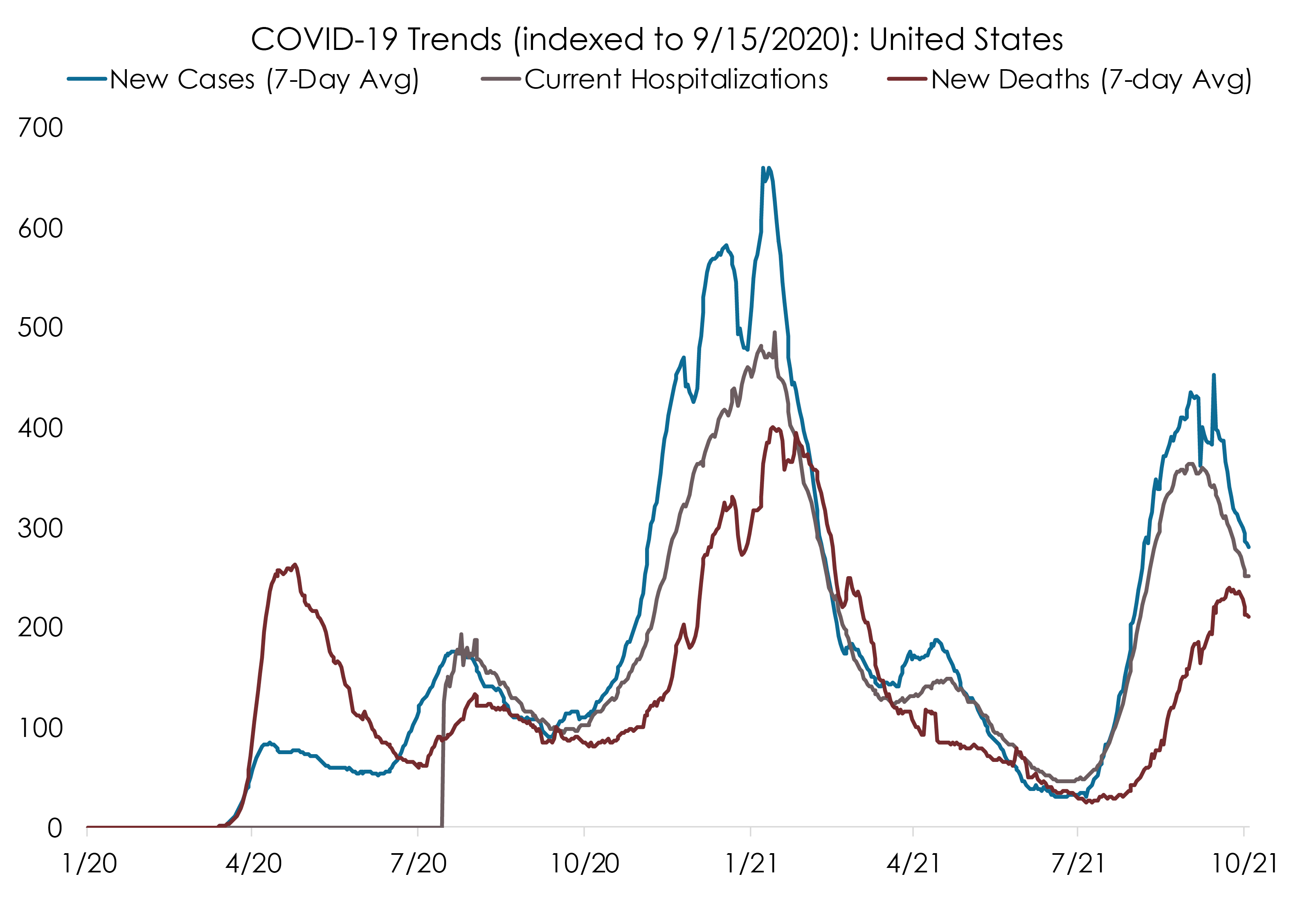 Perhaps just as important from an economic perspective, the propensity during this last surge for government leaders to impose economic restrictions or even more draconian stay-at-home orders appears to have declined. On the margin perhaps, there were some increased mask mandates, but the reopening of schools progressed despite the surge. It seems political leaders have determined that, with vaccines now relatively well distributed, their constituents do not view restrictions as justified or palatable. Economic data has shown some hesitancy by consumers to get out and spend at quite the same pace, but this slowdown appears mainly to be a pause in the resumption of growth more so than a halt or reversal of that growth.

In contrast to the concerns about COVID-19, concerns about inflation appear to originate from the belief that the stimulus has been too large, causing the recovery to be too swift and possibly leading to price surges for goods and services. We believe this is occurring, to some degree. Price surges have been seen in lumber, semiconductor chips and used cars, to name a few. Each surge has occurred as demand outstripped the availability of supply due in part to increased demand, but in some cases the surge was also due to COVID-related supply disruptions. Excess inflation has occurred, with recent Consumer Price Index readings rising above 4% and even into 5% territory for numerous reports through the summer. 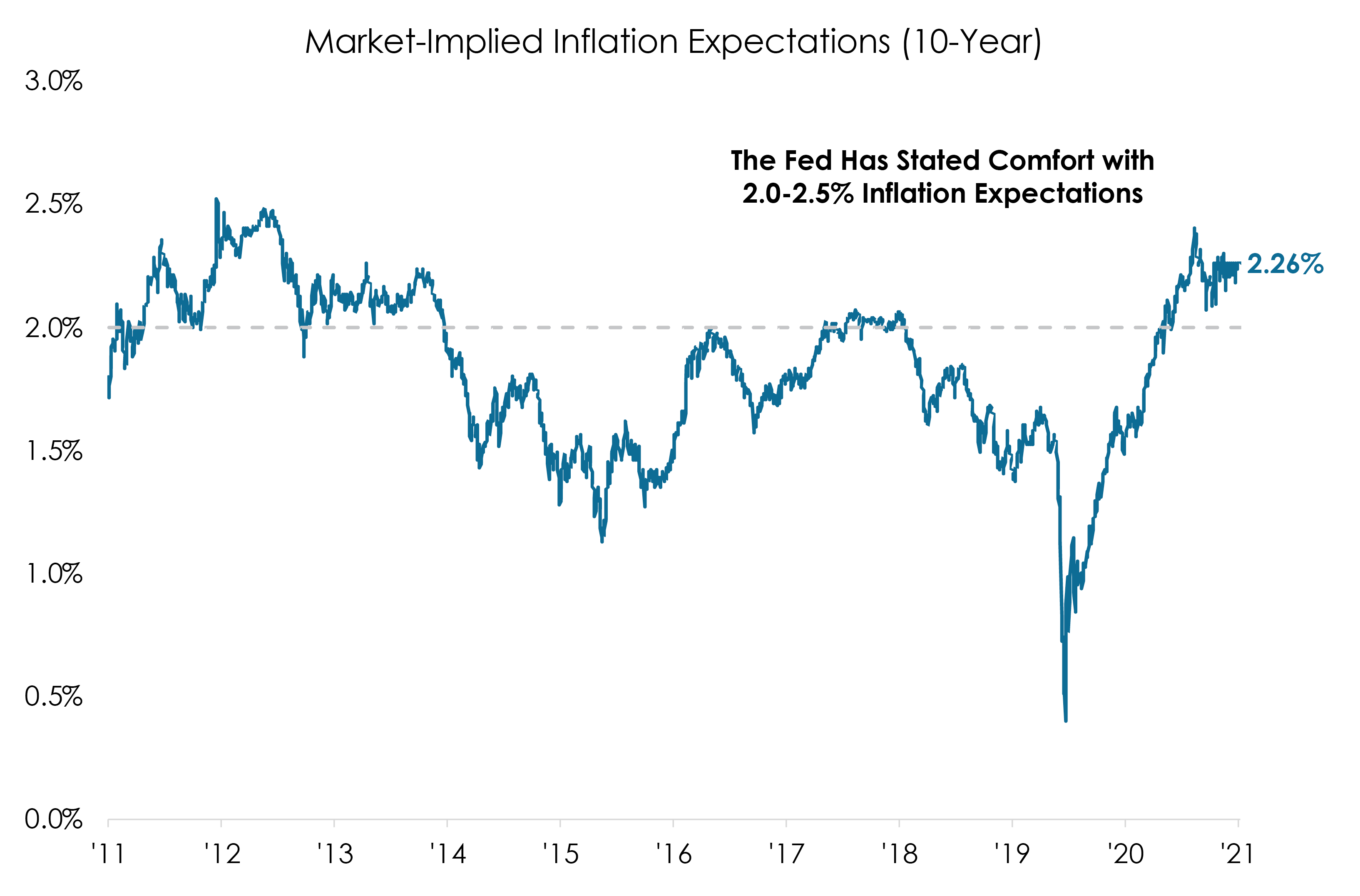 The key question is whether this rate of inflation will prove transitory, with the likely answer a mix of yes and no. Inflation is likely to be higher going forward than the sub-2.0% inflation experienced for much of the past decade, but above-4% inflation is unlikely to persist into 2022 (Exhibit 3). Base effects due to growth from low year-ago inflation will, by definition, end. Supply disruptions are more uncertain, but businesses are quite dynamic and likely to eventually fix supply chain issues given the time to do so. Market-implied expectations for inflation over the next 10 years, while still moving around a bit, appear to be settling into a level that agrees with this understanding of how much of the inflation is transitory or not.

Perhaps a reflection of the manic nature of the investor mindset, concerns about peak growth are often mentioned in popular media and even at times by Wall Street experts. What may be missed is that peak growth, by definition, occurs around one year after the start of each recovery. Why? It is quite simple and similar to the aforementioned base effects for inflation and technology. 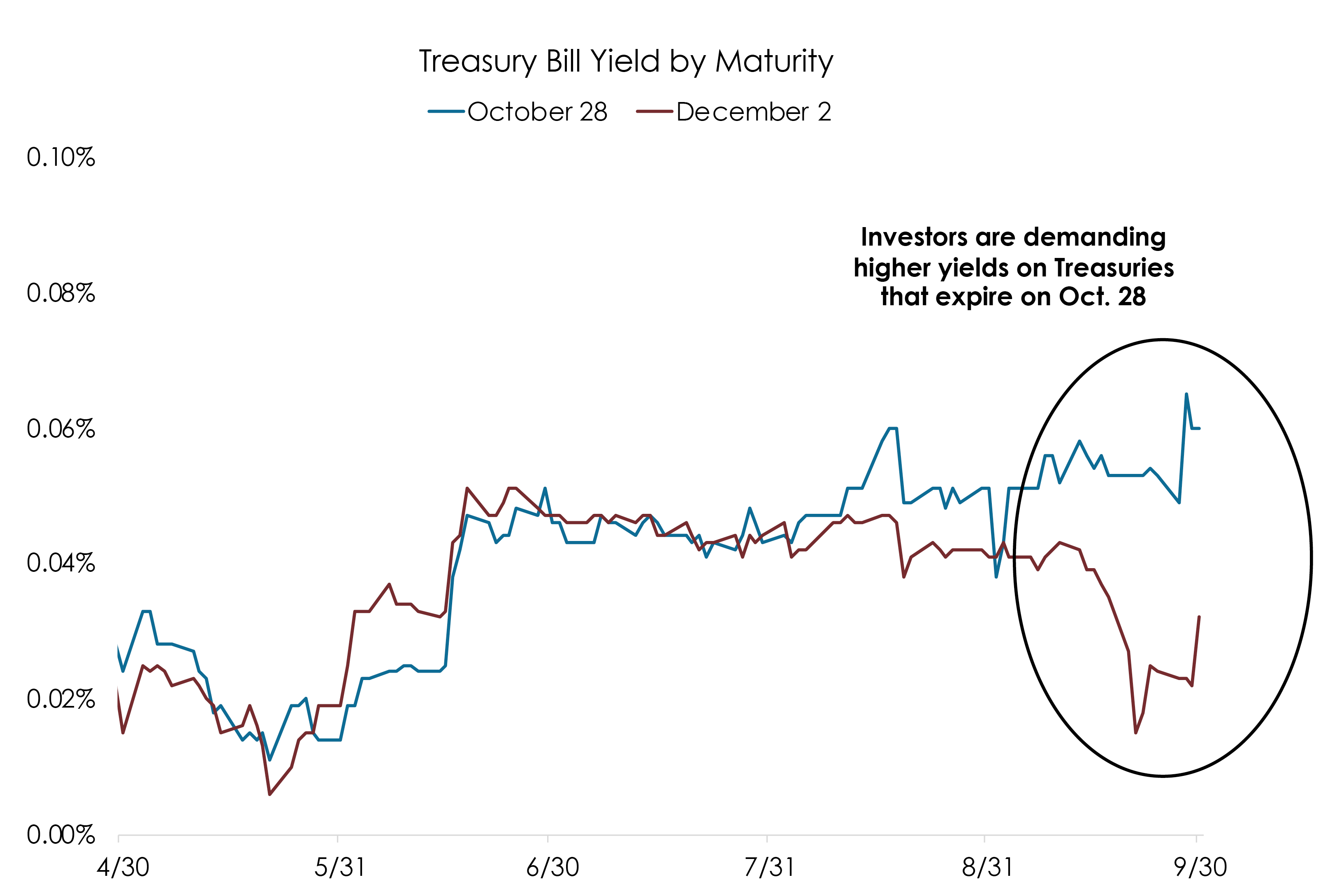 Source: Glenmede, FactSet; Data through 9/15/2021
Data shown in blue bars is the year-over-year growth rate in earnings per share for the S&P 500 Index, which is a market capitalization weighted index of large-cap stocks in the U.S. Q2 2021 is shown in hashed blue since results for the quarter are not yet final. The gray shaded areas are periods of economic recession in the U.S. Data in the table shows performance of the S&P 500 Index on a cumulative total return basis in the one, three and five years after the index posted a quarterly postrecession peak in EPS growth. The dates from which 2002 Q3 and 2010 Q1 ex-post performance are measured are 9/30/2002 and 3/31/2010, respectively. Past performance may not be indicative of future results. One cannot invest directly in an index. Actual results may differ materially from projections.

Peak growth is a phenomenon where year-over-year earnings growth hits a high since it reflects the rebound from suppressed earnings levels. After the one-year mark, those easy comparisons no longer exist, leading year-over-year earnings growth to be lower. Importantly, this decline in growth from the artificially high peak levels historically has not been predictive of overall market returns (Exhibit 4). Instead, investors should be focused on whether the growth rate following peak growth remains acceptable. From our perspective, recent estimates in the high single digits for 2022 earnings-per-share growth meet this threshold.

The most recent concern, still ongoing at the time of this writing, centers around Washington policy, in particular the bipartisan infrastructure bill (American Jobs Plan), the larger budget reconciliation bill (the American Families Plan) and the approaching debt ceiling extension. Washington, with the growing partisan divide over the last decade, has demonstrated a knack for waiting to pass key legislative items immediately before major deadlines.

EXHIBIT 5: Financial Markets Are Reflecting Some Risk of a U.S. Default 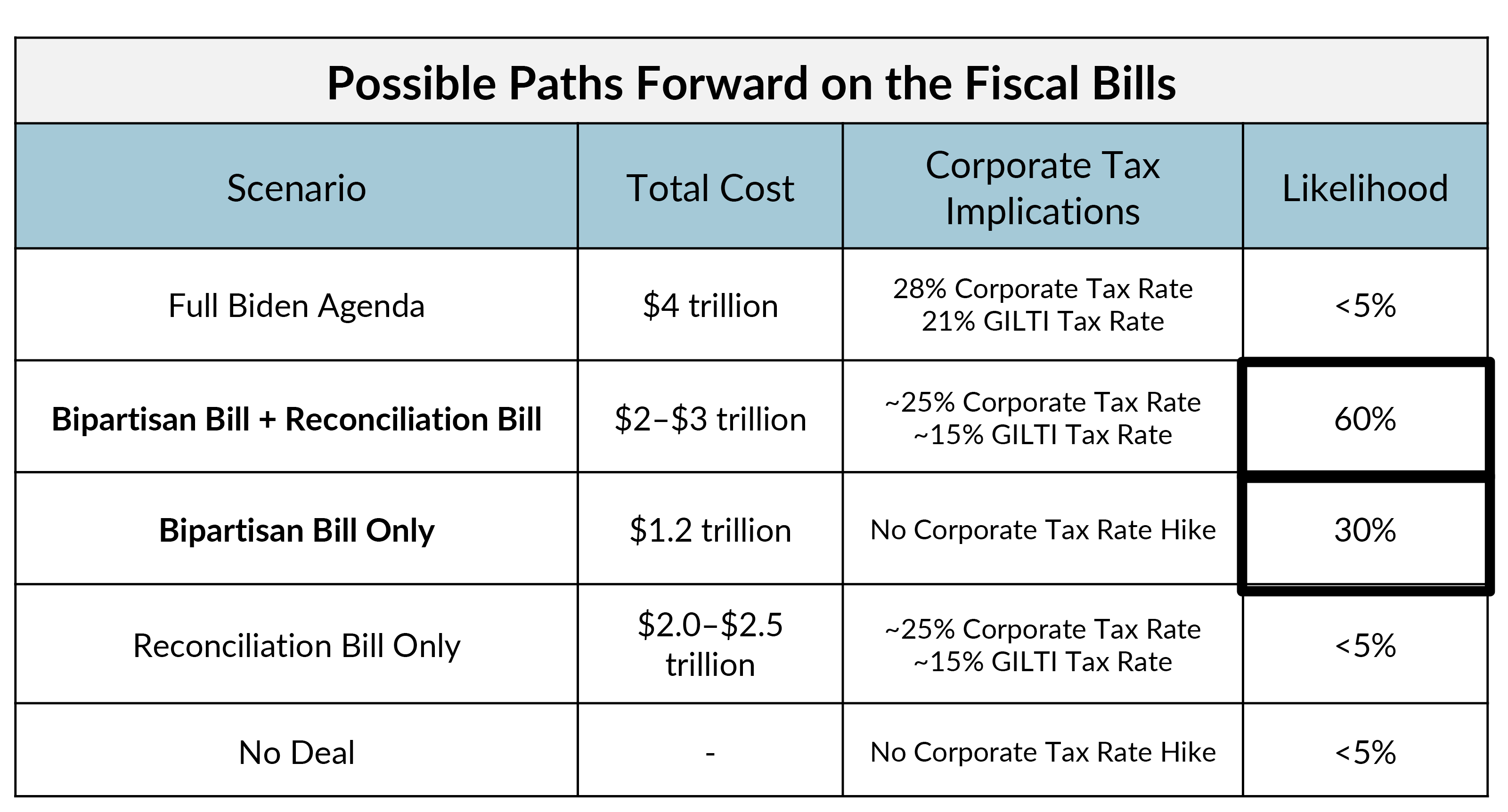 Such a just-in-time legislative methodology introduces unnecessary risk to the economy and markets. Treasury Secretary Janet Yellen and the Congressional Budget Office estimate the government will likely run out of funds to pay all of its obligations at some point in late October, even considering the extraordinary measures the Treasury can take to shift some funds around. After this time, the government could miss a payment on one of its outstanding bills or bonds, which would likely lead credit rating agencies to react. Financial markets, while not materially unnerved yet by these risks, are not ignoring their potential. Treasury bills that expire on October 28 currently yield about 0.04% above Treasury bills that expire later in December, suggesting investors are demanding incremental yield to compensate for the risk they are taking with the October bills (Exhibit 5). Still, cooler heads will likely prevail, as it would be a stain on both President Biden’s and legislators’ careers if they were to allow even a technical default to occur. 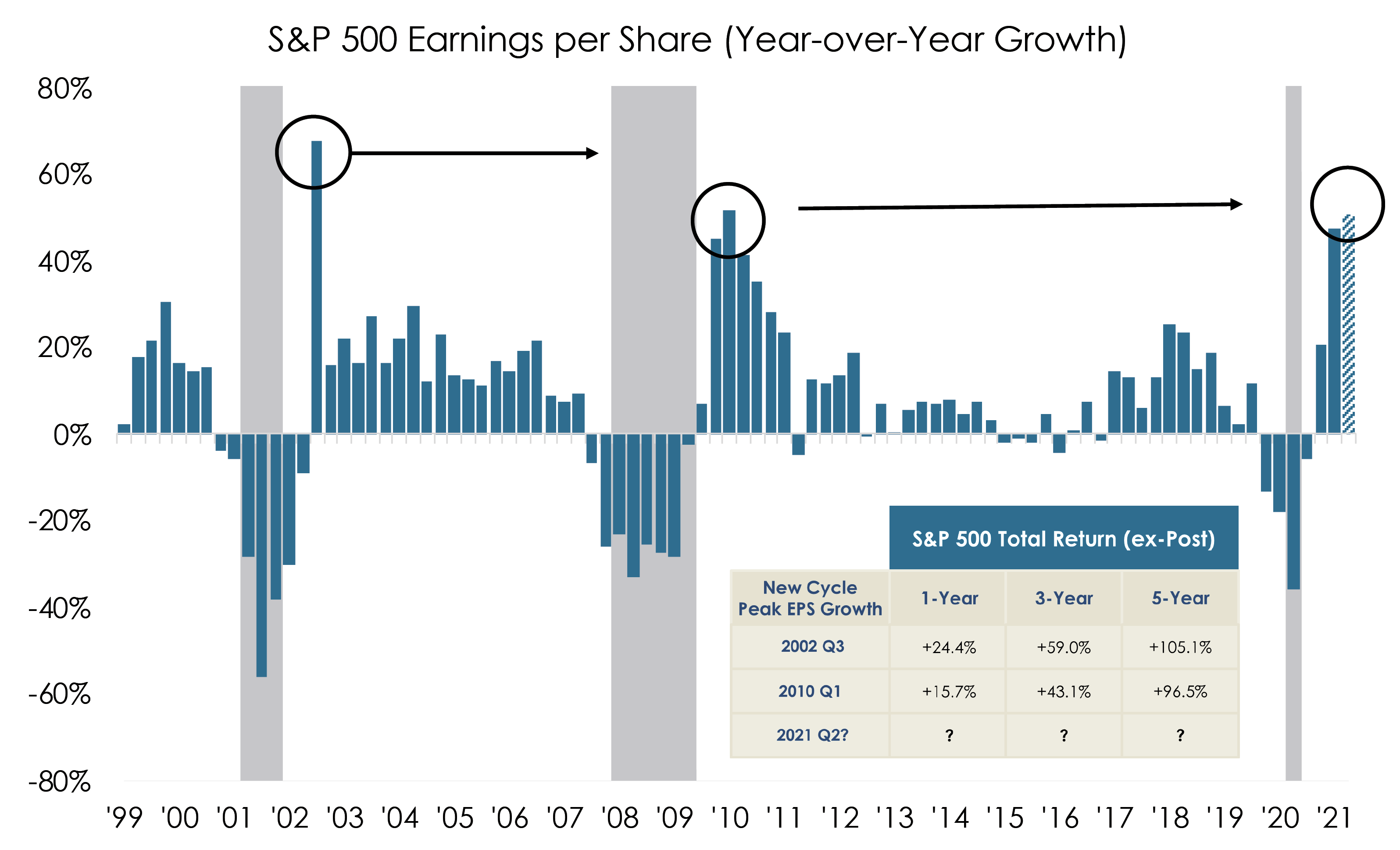 Source: Glenmede, Cornerstone Macro; As of 9/30/2021
Shown are subjective estimates of the likelihood of various political outcomes, provided by Glenmede based on information from Cornerstone Macro and Strategas. GILTI refers to the tax rate applied to global intangible low-taxed income. Actual results may vary materially from these estimates.

The debt ceiling debate is being used as a political lever to put pressure on the size of the reconciliation bill. By forcing the Democrats to incorporate a lifting of the debt ceiling into the reconciliation process, Senate minority leader Mitch McConnell is putting additional pressure on Democrats from key purple states that have already stated their hesitancy toward the size of the spending plans. As a result, the conclusion to this fiscal legislation drama is likely to be the aforementioned lifting of the debt ceiling and the passage of an infrastructure bill and reconciliation bill for a downsized combined total spending closer to $2-$3 trillion (Exhibit 6). Of course, the lobbyists are circling like sharks, the rhetoric is flowing and the final deal has yet to be signed.

Valuations: High but not unreasonable

Equity market valuations have rebounded from the lows of the COVID-induced downturn and recession and have been in the top quartile since late last year (Exhibit 7). Such valuations historically tend to suggest somewhat muted returns over longer periods (3+ years), but have not exhibited a strong relationship with returns over the next 12 months. In fact, markets have exhibited a tendency to find their way to such levels and ride out a good part of an expansion at such valuation levels. A good example of this would be the late 1990s when markets even extended from the top quartile to the top decile before finally reversing course. 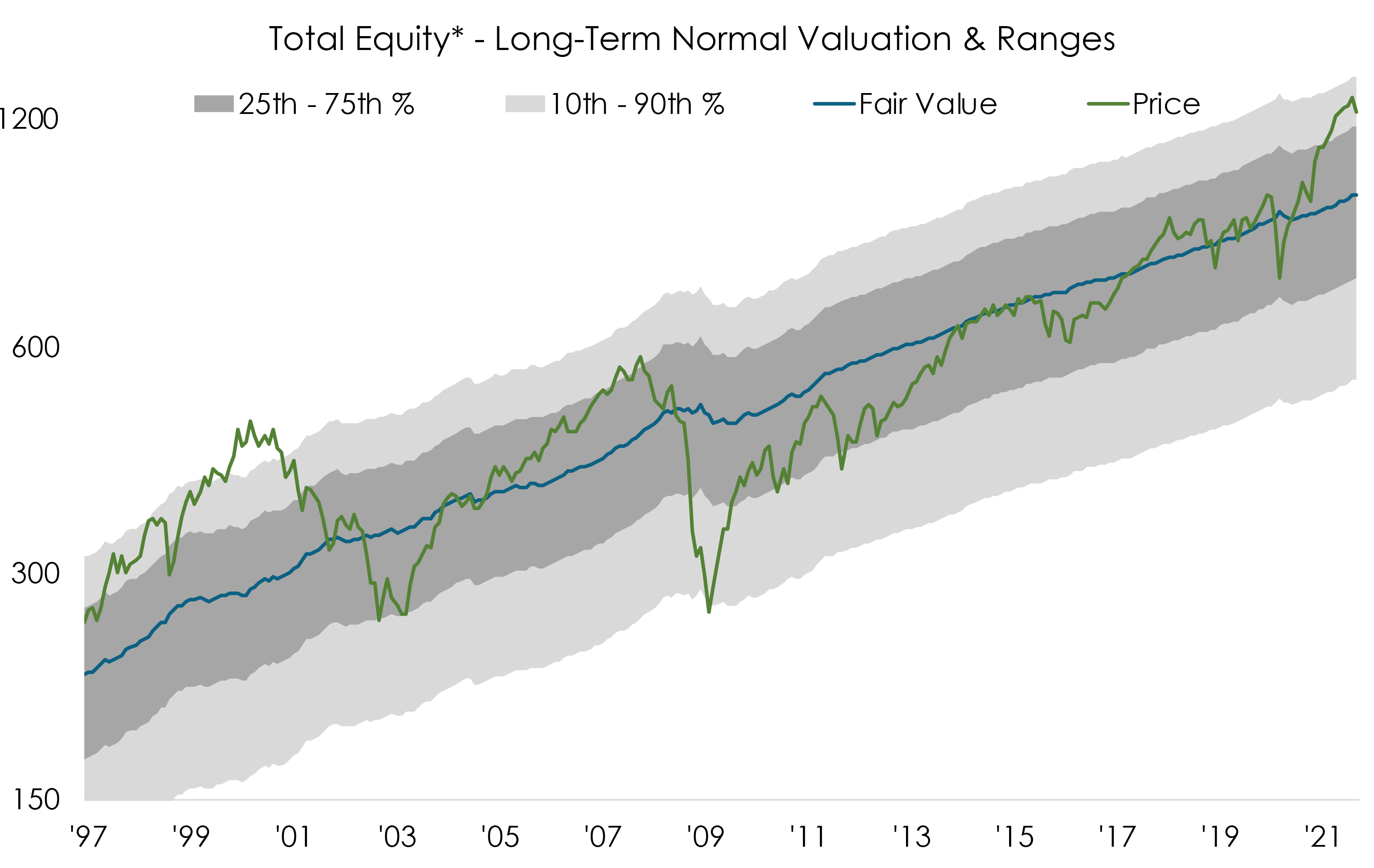 Source: Glenmede, MSCI; Data through 9/30/2021
*Total Equity is a mix of 60% U.S. Large-Cap, 10% U.S. Small-Cap, 22.5% Int’l Developed and 7.5% Int’l Emerging Markets. Glenmede’s estimate of long-term fair value is based on normalized earnings, dividend yield and book value using a weighted mix of the representative indexes for these markets. Valuations for periods prior to 2010 were determined via a retroactive application of Glenmede’s Global Expected Returns Model. These figures are projections which, though arrived at in good faith, are not guaranteed. One cannot invest directly in an index. Past performance may not be indicative of future results.

While valuations are high and deserve ongoing monitoring, it may be more important for investors to focus their attention on the relative total return opportunity, properly adjusted for starting-point valuations, provided by the variety of asset classes available for investment (Exhibit 8). High valuations have compressed return expectations across the board, but the returns available to riskier assets appear to be, on average, still positioned to provide fair compensation for the additional risk taken when compared to the lower risk assets like cash and bonds. Further, valuation disparities and opportunities remain among the asset classes. U.S. small cap stocks, global real estate and international stocks appear priced to provide better returns than large cap stocks, and high yield bonds continue to demonstrate an edge over core fixed income and cash. 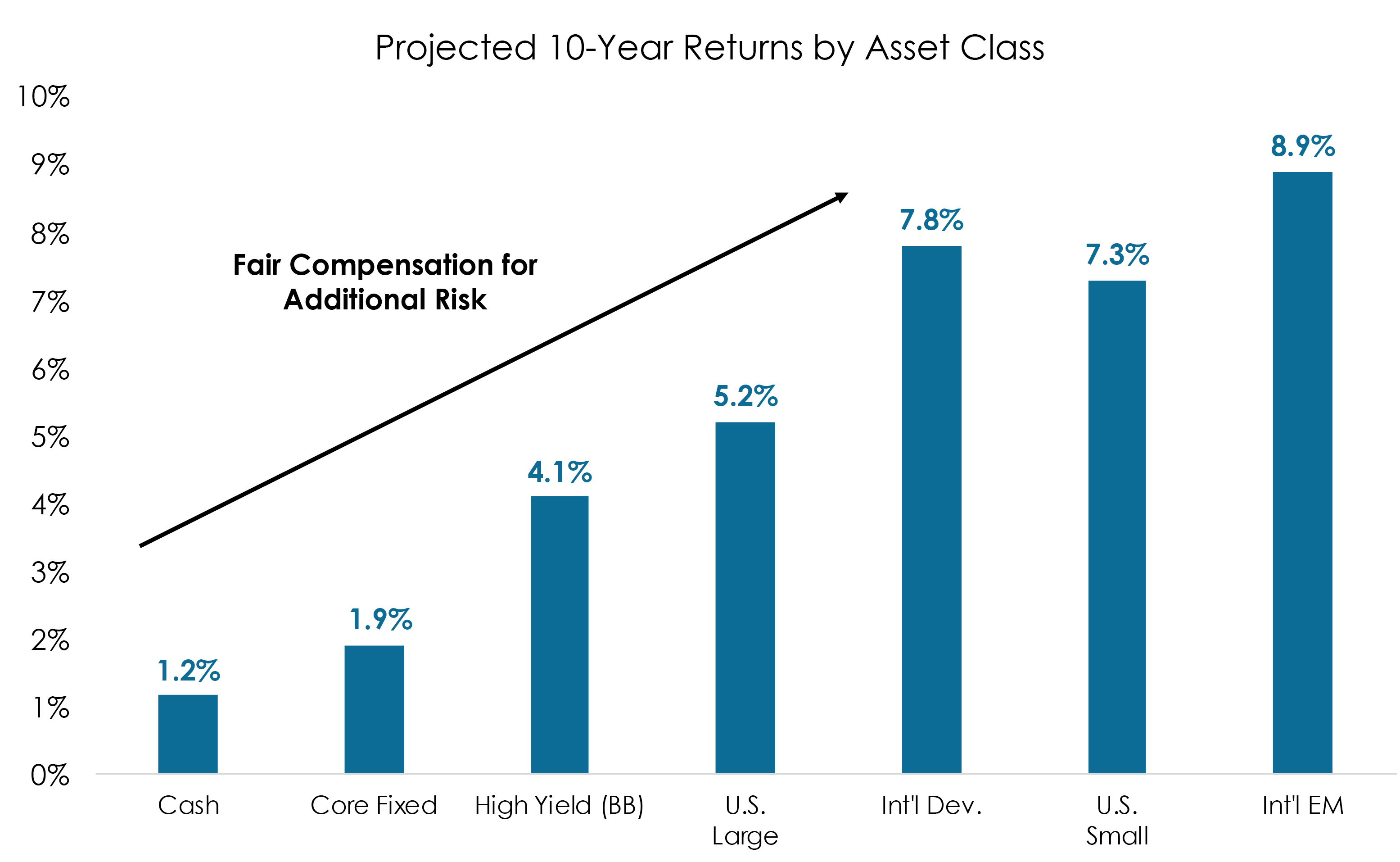 As a result, investors should continue to target a neutral risk posture relative to their goals-based or investment policy objectives. In other words, do not carry a significant overweight or underweight to risk relative to the longer-term allocation targets already established. However, within that allocation, there are several levers that may make sense to use to some degree. Commercial real estate remains attractive relative to traditional equities due to ongoing skepticism about its resilience following the pandemic. We believe such fears provide willing investors an opportunity. Within equities, small cap stocks should be preferred over large cap, and modest overweights to both international and value stocks appear justified. Traditional core fixed income should remain an underweight due to the low yield opportunities, while high yield allocations should be maintained.

EXHIBIT 9: What to Watch 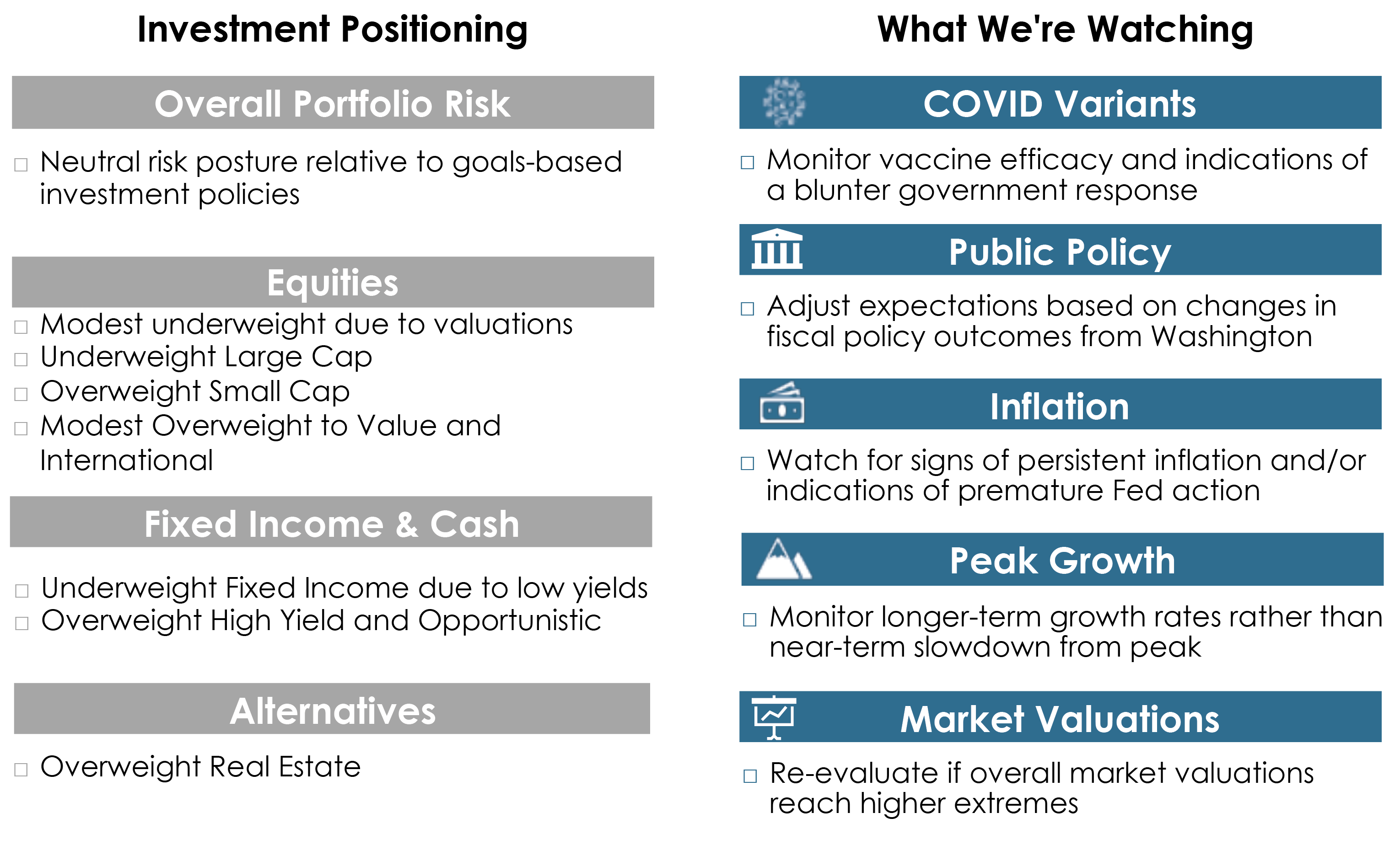 These statements reflect Glenmede’s opinions or projections, which may change after the date of publication. Actual future developments may differ materially from the opinions and projections noted above.

What factors could cause us to reassess? Future bases of reassessment that can be identified align with the worries that make up the metaphorical wall of worry. Outlined in Exhibit 9 are key items we are watching aligned to those worries and what would cause us to rethink the recommended investment strategy. As always, the approach is to position for the expected outcomes and have a plan for monitoring and then responding to those outcomes that are not expected.