“If you don’t know where you’re going, any road will do.”

Markets have exhibited significant volatility throughout 2022 with double-digit swings between highs and lows, a reflection of meaningful investor uncertainty. With this in mind, it is important for investors to map out the road ahead instead of sitting idly by and hoping for the best. The S&P 500 rallied 14% from its October 2022 low through early December in another mini bear market rally, on par with other bear market rallies, but its performance through 2022 remained quite consistent with that of the typical bear market (Exhibit 1). 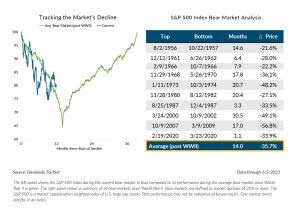 Importantly, if the current bear market turns out to be similar to the average historical bear market, further downside remains. With a near 20% decline from its peak at the start of 2022, the S&P 500’s decline has not quite reached the historical average of -35% (Exhibit 1). This provides a good roadmap for the bear market as a milemarker for our positioning.

The magnitude of volatility and back-and-forth movement of the market should not be surprising since investors continue to struggle with still-high inflation, a rapid pace of Fed rate hikes and a potential recession. Such volatility has typically occurred heading into other bear market declines associated with recessions (Exhibit 2).

EXHIBIT 2: Bear markets often bottom after a recession begins, but before a recession ends It is important to pay close attention to the trajectory of the market around these recessionary periods. One key observation is that bear market bottoms have historically occurred after a recession has begun, not before. In each situation, investors and professional forecasters remained divided on the economic outcome until just before the economy slipped into recession. Ultimately, the downside was realized when the remaining recession deniers threw in the towel and negativity set in.

Our conviction that a recession is likely to occur, creating a picture similar to past bear markets, comes from the magnitude of Fed tightening last year. The central bank increased rates 4.25% during 2022 to a target level of 4.25-4.50% and is expected to hike rates more in 2023, bringing the fed funds rate close to, if not above, 5.00% before finally halting rate hikes. This rate hike cycle is one of the fastest in the Fed’s history and will take rates well above the estimated neutral rate of near 3.00% (Exhibit 3). In the past, such tightening has eventually resulted in a recession given the impact that it has on consumers and businesses alike, driving up the cost of debt in an economy that borrows to facilitate a significant amount of its marginal spending.

EXHIBIT 3: The Federal Reserve has hiked rates above neutral The base case of a pending recession and a history of bear markets that decline further into those recessions underlines our recommendation to underweight equity market risk in portfolios relative to a longer-term investment plan.1 Of course, the length and depth of the various recessionary bear markets include a range of observations, from higher to lower and shorter to longer. Further, on which side of the spectrum the current bear market will fall depends largely on the various potential paths from here.

If one were to think of the average bear market as a well-traveled highway, one could consider these different paths as offramps from that highway — reasons for the direction of the markets and the optimal investment strategy to potentially shift in a more constructive direction (Exhibit 4). Some of these offramps, such as the soft-landing scenario, are more favorable; others, such as the recessionary path or decline to fair value, require a period of difficulty prior to upside opportunity. These offramps are explored further below.

The most favorable potential offramp is that of the economic soft landing, in which inflation declines rapidly, allowing the Fed to back off on its rate hikes and possibly avoid a recessionary outcome. The window of opportunity for this outcome declines with each month of continued inflation and further Fed rate hikes. Even if the Fed were to halt rates today, the probability of the U.S. economy avoiding recession with rates having already surpassed neutral appears rather low, but the Fed is likely still not finished.

Inflation has admittedly begun to moderate in some areas such as commodities, used cars and other physical goods, but has continued to increase for items such as education expenses, medical costs and housing. The latter items are included in what is often referred to as sticky inflation, aptly named due to such inflation’s propensity to be difficult to reverse (Exhibit 5). As such, the Fed is likely to remain concerned with the potential for inflation and inflation expectations to exhibit “stickiness,” with such reasoning likely leading the Fed down a path of tightening more rather than less heading into 2023.

EXHIBIT 5: Some signs of declining inflation, but the Fed cannot yet become complacent The second potential and more likely offramp is one through an economic recession to an eventual recovery. To properly navigate this path, it is important to understand the typical sequence of events that often occurs around such events. The start of the recession often begins due to economic excesses (overspending or overbuilding) or above-normal inflation that induces the Fed to tighten monetary policy to rein in the economy. More often than not, however, the Fed pursues such policy only after excesses or inflation appear and typically hikes rates to such a degree that its actions precipitate the economic decline from overheated levels.

Similarly, during the decline the Fed often begins to back off its previous tightening campaign and, in many cases, eventually provides support to stabilize the economy once the decline has proceeded to a degree that is unacceptable to the Fed. Somewhere during this period, often well after the start of the recession, the National Bureau of Economic Research (NBER) officially pronounces the recession as having begun. However, during many recessions, this pronouncement is often more of a harbinger of the next recovery rather than more difficult times ahead since the Fed (and perhaps the broader government) has often begun to take steps to provide support. Such recoveries are often just as swift as the decline and just as rewarding to investors as the downturn is damaging.

Exhibit 6 provides a valuable guide for investment positioning. The downside is significant from the point of excess during which the Fed is hiking rates the fastest. However, opportunity may exist once the economy cools off to a degree and the Fed is less the antagonist. To seize such opportunity requires patience in waiting for the effect of the rate hikes to ripple through the economy — from reduced capital spending by businesses to layoffs and reduced hiring to downshifts in consumer spending. This includes waiting for the NBER to call a recession or for its definition of a recession to be met. As is often the case during recessions, Wall Street analysts should be providing a similar confirming signal by reducing their estimates for corporate profits. Expectations for earnings in 2023 have declined approximately 8% from a high of near $252 for the S&P 500 earlier in the summer to their current level of near $230 (Exhibit 7).

EXHIBIT 7: Earnings estimate have declined, but not quite to the tune of a typical recession 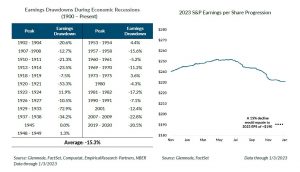 Such adjustments may have further to go, given the impact of the strong dollar, higher interest rates and the fact that recessions, on average, have seen a decline of 15% from prior peak earnings. If earnings were to match this typical 15% decline from peak levels, 2023 EPS for the S&P 500 would be around $190.

Despite the volatility in 2022, markets remain above fair value, according to Glenmede’s proprietary Global Expected Returns Model, based on an aggregate of earnings, cash flow, book value and dividends for the companies in a given index (Exhibit 8). Historically, economies that decline into recession tend to see valuations drop at least to, if not below, fair value as the pessimism about the economy and corporate earnings permeates the average investor’s psyche.

EXHIBIT 8: Equity valuations remain above fair value, unlike prior recessions It is this bout of pessimism that sows the seeds for “V”-shaped market rebounds seen in the earlier bear market illustrations. These points in time, amid the greatest economic and market difficulty, have historically proved to be incredible buying opportunities for longer-term investors, but waiting for such opportunities requires patience.

As a result, investors should maintain a defensive position in portfolios relative to their goals-based investment policy, achieved primarily through an underweight to equities. Within equities, investors should favor quality companies with less leverage, higher profit margins and more stable earnings.

In addition, investors should shy away from international equities, Europe in particular, given greater economic difficulties abroad. Each of these measures is intended to reduce the potential downside risk of the portfolio until a more advantageous risk-taking time arrives. However, investors should be careful that such allocation tilts are appropriately sized and avoid the pitfall of attempting to time wholesale exit and re-entry of equities in volatile markets.

Looking back, 2022 will go down in the annals of history as one of the most difficult environments for investors. Equities delivered double-digit losses, but bonds failed to provide their typical counterbalance and instead delivered double-digit losses (Exhibit 9). Few asset classes other than cash provided opportunity for protection at the start of the year, but this picture changed as the year progressed. The poor performance of bonds was accompanied by a significant rise in bond yields, making bonds more attractive on a go-forward basis than they have been in quite some time (Exhibit 8).

EXHIBIT 9: 2022’s simultaneous decline of stocks and bonds was unique Interest rates on the safest of bonds — U.S. Treasuries — have risen to near 4% across much of the yield curve. Such levels are above longer-term expectations for inflation and leave a reasonable amount of room for appreciation should a recession unfold. Further, after years of yielding less than the typical dividend yield on stocks, most bonds now yield well above the payouts available from the typical stock. As such, this portion of the typical balanced or 60%-40% stock-and-bond portfolio is again priced in a way that it may provide the counterbalance to equity market declines that it did not provide earlier in the year. 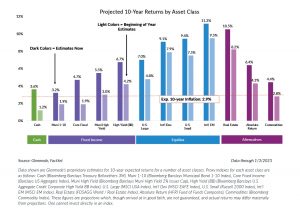 Lastly, while bonds may have seen the largest increase, long-term expected returns on most asset classes have risen materially from year-ago levels as markets have corrected in 2022 (Exhibit 10). While it may seem like a consolation prize amid market declines, such increases in longer-term expected returns will help setup the typical diversified 60/40 portfolio for better returns at some point on the road ahead (Exhibit 11). Until then, investors should remain both defensively positioned relative to their longer-term plan but alert and ready to make tactical adjustments as circumstances change. 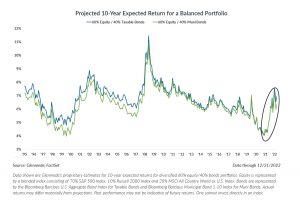 This material provides information of possible interest to Glenmede Trust Company clients and friends and is not intended as personalized investment advice. When provided to a client, advice is based on the client’s unique circumstances and may differ substantially from any general recommendations, suggestions or other considerations included in this material. Any opinions, recommendations, expectations or projections herein are based on information available at the time of publication and may change thereafter. Information obtained from third-party sources is assumed to be reliable but may not be independently verified, and the accuracy thereof is not guaranteed. Outcomes (including performance) may differ materially from any expectations and projections noted herein due to various risks and uncertainties. Any reference to risk management or risk control does not imply that risk can be eliminated. All investments have risk. Clients are encouraged to discuss any matter discussed herein with their Glenmede representative.

Q4 2022 Market Insights: The Bear and Bull Dilemma
Q3 2022: An Inflation-Induced Bear
Q2 2022: The Ukraine-Induced Correction, Inflation and the Fed