Evaluating Bitcoin as an Investment in a Diversified Portfolio

Bitcoin has been around since 2007, went mainstream around 2017 and more recently has experienced renewed interest. In fact, bitcoin found its way to new highs the week of October 18, 2021, and as recently as November 9. The October high was driven in part by the launch of the ProShares Bitcoin ETF (ticker: BITO), the first bitcoin futures exchange-traded fund (ETF) approved by the U.S. Securities and Exchange Commission (SEC).

For the cryptocurrency market, the futures-based ETF is a milestone that could transform how bitcoin and other crypto assets are traded. There is scope for arbitrage, hedging and shorting because ETFs attract flows from financial advisors and institutions that seek a regulated instrument in their portfolios. There are other bitcoin futures ETFs that have begun trading following BITO’s emergence, and others are waiting for the final nod from the SEC to begin trading. However, there is still skepticism since the ETF invests in futures instead of directly in bitcoin, and thus may not perfectly replicate the performance of the targeted cryptocurrency.

Bitcoin as an investment

Bitcoin and other cryptocurrencies can be alluring for those investors willing to assume substantial risk and driven by the belief that crypto is a viable store of value.

As a store of value

Good stores of value traditionally offer stability, but bitcoin has a tremendous amount of volatility. Exhibit 1 shows, since October 2013, the number of trading days each asset class has moved in either direction, up or down, greater than the stated threshold. For example, stocks saw daily moves of more than 5% ten times, bonds never did so, gold did so only once and bitcoin did so 470 times.

This volatility is somewhat expected due to the developing status of the cryptocurrency asset class, so some have argued that bitcoin’s volatility should settle down once it becomes more widely accepted, but so far that is not the case. Exhibit 2 shows rolling one-year annualized volatility as measured by the annualized standard deviation of 12-month returns. The purple line is bitcoin’s volatility throughout time; while it has had its ups and downs over the past few years, it has remained magnitudes more volatile than bonds, gold and even U.S. large cap stocks. Even at its lows, 45% volatility can be difficult to stomach, particularly if bitcoin is meant to provide a longer-term store of value. 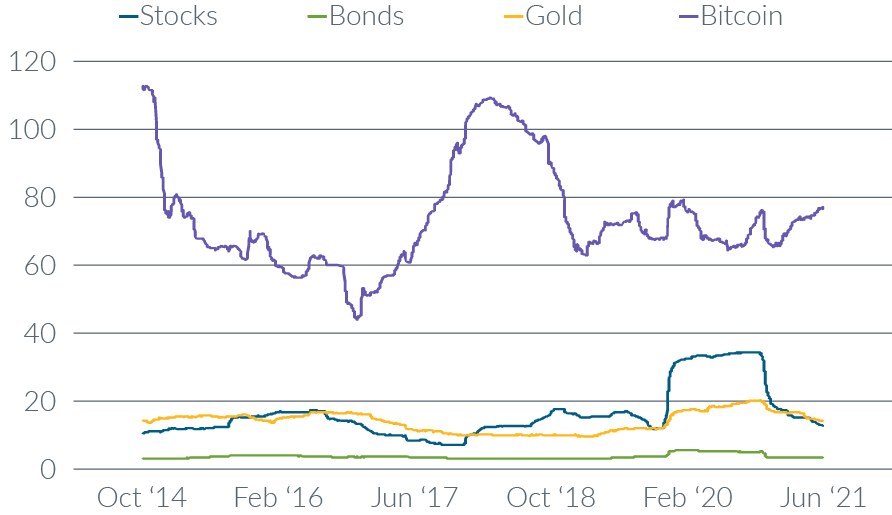 As a structural addition to a portfolio

Bitcoin does not have to be a good store of value to be additive to a portfolio. In general, an asset that provides positive expected returns and low correlation can potentially fulfill that role by providing a degree of diversification. More valuable diversifiers, such as bonds and gold, tend to exhibit their noncorrelation when stock markets decline. Exhibit 3 shows the correlation of bonds, gold and bitcoin to stocks under two scenarios — all days since 2018 are depicted in light blue and all days since 2018 when stocks were down more than 1% are in dark blue. In both scenarios, bitcoin has exhibited higher correlations than both bonds and gold, particularly in risk-off environments.

The same can be seen with the equity beta in green, which represents the amount of stock market risk embedded in each asset class. Exhibit 4 has the same four asset classes during the last two major risk-off events in domestic large cap equity markets, with the COVID-19 bear market on the right and the Christmas Eve correction of 2018 on the left. In both cases, the S&P 500 was down close to or more than 20%, but traditional diversifiers exhibited much lower volatility. The same cannot be said for bitcoin, which was down almost as much as stocks during last year’s bear market and more than twice as much in 2018.

Exhibits 3 and 4: Is bitcoin a good structural addition to an overall portfolio? 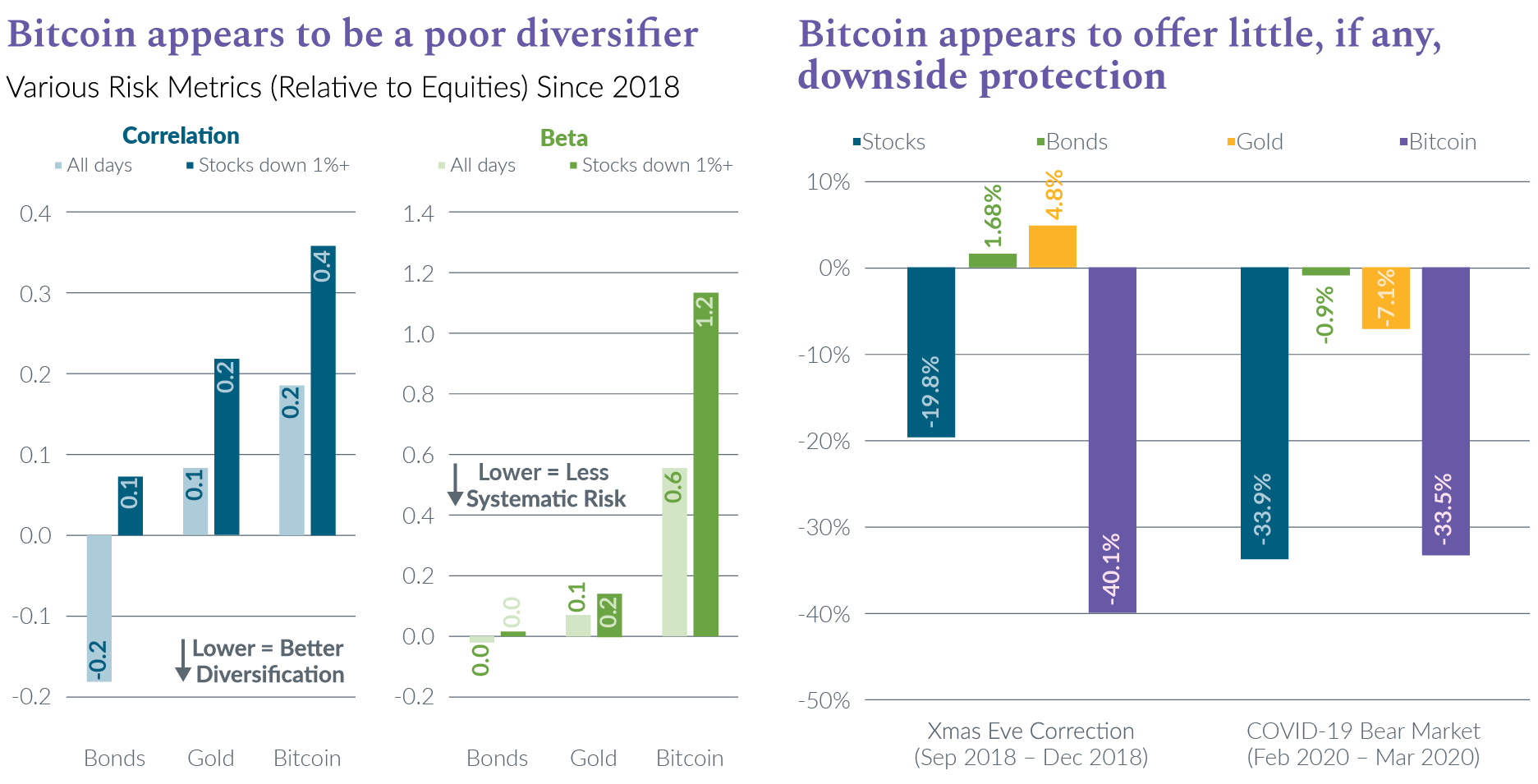 Source: Glenmede, FactSet. Data through 10/22/2021
Data shown in the chart on the left are correlations between stocks relative to bonds, gold and bitcoin. Data shown in the chart on the right are betas between stocks relative to each of bonds, gold and bitcoin. All data in light-shaded bars include every trading day since 2018. All data in dark-shaded bars include only the trading days when stocks finished a trading session down 1% or more. Stocks are represented by the S&P 500 Index, bonds are represented by the Bloomberg Barclays U.S. Aggregate Index, gold is represented by the SPDR Gold Trust and bitcoin is represented by daily transactions via CoinDesk. Past performance may not be indicative of future results. All indices mentioned are unmanaged, total return indices with cash flows reinvested. One cannot invest directly in these indices.

Although an ETF option may provide investors greater accessibility, bitcoin has an empirical track record of unrivaled volatility and has failed to offer downside protection — poor attributes for a store of value. While bitcoin appears disadvantaged relative to other traditional stores of value and investment assets, the advent of the underlying blockchain technology may create new investment opportunities. Blockchain-based technology is rapidly evolving, and there may be some interesting applications for it, such as decentralized finance and digital rights ownership, with some private market opportunities beginning to emerge.

This presentation is intended to be an unconstrained review of matters of possible interest to Glenmede Trust Company clients and friends and is not intended as personalized investment advice. Advice is provided in light of a client’s applicable circumstances and may differ substantially from this presentation. Opinions or projections herein are based on information available at the time of publication and may change thereafter. Information obtained from third-party sources is assumed to be reliable, but accuracy is not guaranteed. Any company, security, fund or other investment identified herein is provided solely for illustrative purposes and should not be construed as a recommendation or solicitation for the purchase or sale of any such investment. Outcomes (including performance) may differ materially from expectations and projections noted herein due to various risks and uncertainties. Any reference to risk management or risk control does not imply that risk can be eliminated. All investments have risk. Clients are encouraged to discuss the applicability of any matter discussed herein with their Glenmede representative.